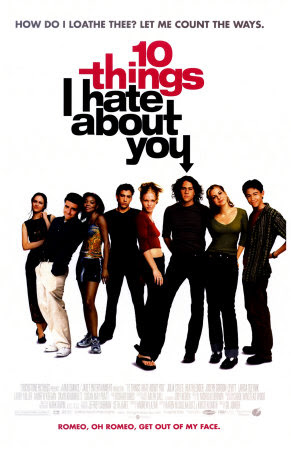 “Listen, I’m down, I’ve got the 411, and you are not going out and getting jiggy with some boy, I don’t care how dope his ride is!… Momma di’nt raise no fool.”
Walter Stratford in 10 Things I Hate About You

10 Things I Hate About You focuses on the Stratford sisters; Kat and Bianca. Kat and Bianca couldn’t be more different. The youngest, Bianca, is incredibly popular at school and all she wants to do is party with her friends and date. Kat, however, doesn’t conform to the social rules at school and has become an outcast. She is ill-tempered and openly mocks her fellow students. They have an overprotective father named Walter (played by Larry Miller) who only has two rules: 1) No dating until you graduate, and 2) No dating until you graduate. Bianca argues with her father over the rule, but Kat isn’t bothered because she has no intention of dating. Realising this, Walter comes up with a new rule: Bianca can date only if Kat does. Cameron, a new kid at school, devises a plan to get Kat dating: pay someone to date Kat. The only person in the whole school who might be a match for Kat is Patrick Verona; a bad boy who has a bad attitude that almost equals Kat’s. Will Cameron be able to convince Patrick to date Kat? If he can, how will Kat react when she finds out he was paid to date her?

I love the opening for this movie. It shows Kat pulling up at traffic lights next to a convertible with four girls inside. Kat is blaring Joan Jett’s Bad Reputation and she rolls her eyes at the girls in the other car who quickly avert their eyes. She pulls up at her school and proceeds to rip down a poster advertising the prom. This is the perfect introduction to Kat as a character, and sets the comical tone of the movie. Kat is brilliant throughout, and Julia Stiles really portrays the bitter side of her character well. Both her quick wit and angry girl attitude are hilarious to watch throughout. It is nice to see her slowly let her guard down as the movie progresses, and you see that the angry, mean girl persona is just an act to keep people out. I also really like how ballsy Kat is throughout. She speaks her mind when she thinks the teachers or classmates are incorrect in class, despite the groans from her fellow classmates. This often landing her in the principal’s office because she’s annoyed the teacher. Plus, she helps get Patrick out of detention by flashing her soccer coach, which is hilarious. I really related to Kat, and I think that a large number of people will related to her.

There are a lot of brilliant characters in this movie. My favourite, aside from Kat, has to be the over protective father, Walter. He has some of the best lines in the movie, and Larry Miller does a great job. I love Walter’s reasons for having a no dating rule: he delivers babies for a living, and he is constantly referring to the babies he delivers for young girls. For example, this is just one of the hilarious exchanges that happen when Bianca tries to convince her father to drop the no dating rule:

Plus, Walter also has a fabric baby bump that’s a bit like a backpack, but worn on the front. He makes Bianca wear this before she goes out to a party to remind her of the consequences of getting pregnant. He kept me laughing throughout the whole movie.

The teachers in the movie are also unique—unlike any teachers I have ever met, but brilliant to watch in a movie. The school’s guidance counselor, for example, swears, flips off the students and is writing erotica, and yet she looks so prim and proper. She has a rather preppy look (shirt with a pink jumper over the top) and glasses attached to a chain around her neck. Plus, her name is Ms. Perky! Then there is the English teacher, Mr. Morgan. He is great because he’s as outspoken as the students. He has some great one-liners as he is taking the mickey out of the students or telling them off. He often sends Kat to the counselor’s office. For example, at one point she expresses her enthusiasm for a project he assigns, which is unusual, so he sends her to the counselor’s office.

There are a few characters who I didn’t like. I really didn’t warm to Bianca. She acted like a spoiled brat for the majority of the movie. I didn’t enjoy the plot points that related to her character. She just tended to use people to get what she wanted, and talked about really stupid things. For example, at one point in the movie, she says, “There’s a difference between like and love. Because, I like my Skechers, but I love my Prada backpack.” I know that the point is to establish Bianca is really popular, and the opposite of Kat, but I think this went a little far. Bianca became a very stereotypical version of a popular girl at school: superficial, only interested in partying and boys, and fairly stupid. Bianca does redeem herself as the movie progresses, although not soon enough for me to really like her. I do really love the moment where she punches a fellow student in the face twice, and knees him in the groin. I won’t explain why, as this will give away plot points, so you’ll have to watch the movie.

Then there’s Cameron. The minute he sees Bianca, he is in love. My issue with Cameron is that he thinks he knows her in that instant, too. He talks about how amazing she is, and how perfect she is, and defends her when the student showing him around school suggests she might not be as nice as he thinks she is. This annoyed me because he’s only just arrived at the school so he definitely doesn’t know what she’s like. Plus, the student showing him around the school is actually right. This continues throughout most of the movie and he wears this constant puppy dog look, which I found irritating. This lessens somewhat toward the end of the movie, but not entirely.

Final Verdict: A great comedy, not to be missed.