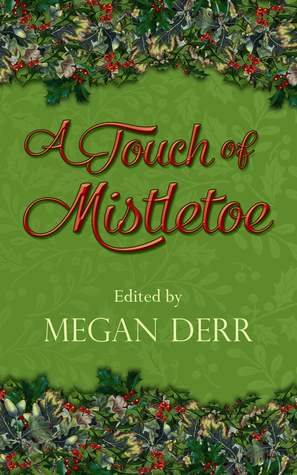 “It turned out M.C. didn’t really do Christmas the way An-An’s family did, with presents and cookies. Instead, there was a lot more mayhem and death.”
From Ad Meliora in A Touch of Mistletoe edited by Megan Derr

A Touch of Mistletoe is a wonderful collection of five short stories that have to do with Christmas/A Winter Holiday, and where a sprig or two of mistletoe plays a key role in the romance. Being a fan of Megan Derr and the Less Than Three Press, I found I could not resist requesting this from NetGalley. Below is a list of the short story titles and brief descriptions of the stories.

Here for You by J.K. Pendragon

At a friend’s Christmas party Warren, a blind man still getting over the loss of his wife, has his world rocked when Kyung-Sam kisses him under the mistletoe. It causes Warren to slowly re-evaluate his life and the possibility that there may still be love left out there for him. Kyung-Sam meanwhile is dealing with knowing he is gay, but is a full time career for his dying father who does not know this. Is there more in store for these two?

The Christmas Spirit by Talya Andor

Ash, a paranormal consultant and occult shop owner living in Japan, is surprised to be hired to investigate the haunting of a famous figure skater. While investigating the apparent ghost that has latched itself to Yuki, Ash has to fight his growing attraction for the exuberant younger skater because he feels it would be inappropriate to start anything between them. However, no one has told Yuki this, and with a mistletoe inspired cake things might change between them, but only after the ghost is dealt with of course.

A Beautiful Thing by A.F. Henley

Scott Misener has become jaded with life and downright belligerent in the face of all the holiday cheer. However, Christmas Eve night, after an incident at the grocery store over the misguided romanticism of mistletoe, he is visited by Drualus, Senior Correspondent for the Collective Assembly of Christmas Fae, working with the Night Before Reach Out Program. Scott knows the drill and grudgingly goes along for his Christmas Carol inspired night, never realizing it will indeed change his life, if only he lets it.

An-An and her lover, M.C., are spending Christmas in a remote lodge investigating several supernatural deaths. Instead of the usual family affair that An-An is used to, the two end up fighting for their lives against a vengeful demon, with only their arcane knowledge and mistletoe as defence. It wasn’t exactly the romantic getaway that the picturesque setting would lead one to believe.

Master Potion maker Kingston is surprised when the man that he has been meeting for two years for anonymous sex turns up in his shop the night before Frost Day, especially as Kingston had been planning on asking the man if they could be more to each other. The man turns out to be Huxtable, secretary to a noble man, a man that Hux suspects has been poisoned with a love potion. Quickly the two must work together to save Hux’s friend and master, but maybe after there is time for them to discuss what is happening between them, especially now that they know who other really is.

Unfortunately due to my scholarly pursuits I was unable to read this during the winter holiday season, however once I finally started to read it, I finished within a single afternoon. It was a great collection of stories, and it is very difficult for me to pick a favourite. Each story brought in such different aspects and worlds, but was engaging in its own way. There isn’t a single story that I would skip the next time I read the book. I was pleasantly surprised by how diverse the characters in the stories were, with a good number not being white, only one story involved a female main character but her love interest identifying as non-binary with they/them pronouns, and at least one other lead was bisexual. Also, for the folk lore lover in me, it was nice the stories really covered many of the different myths around mistletoe. The only caveat for the typical readers of the blog is that this is an adult collection, with several explicit sex scenes. However, if you are into short stories with LGBTQ main characters this is a great collection and can be enjoyed any time of year, but especially in winter!

Final Verdict: A great collection of winter holiday themed stories that make for a fun way to take a break no matter the time of year.