Written by William Shakespeare
As seen in Stratford-Upon-Avon, England
14 February 2013 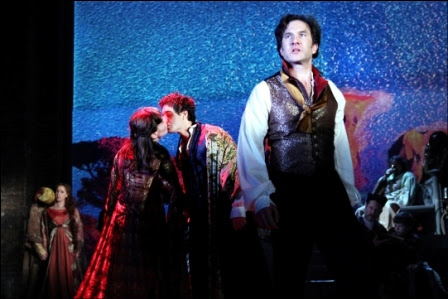 “Though I am not naturally honest, I am so sometimes by chance.”
Autolycus, A Winter’s Tale by William Shakespeare

As I’m not a fan of Valentine’s Day, I was more than happy to find that there was a matinee showing of a Shakespeare play that I could attend. I have actually seen A Winter’s Tale before, preformed by the Cincinnati Shakespeare company, so I knew going in that it is okay, but not my favourite story. Knowing this, and having been a bit gun-shy about attending after the rather disappointing rendition of Tempest, the performance was actually a pleasant surprise, and a really enjoyable way to spend the day.

A Winter’s Tale is a very strange play in that the first half feels like a Greek tragedy and the second half a comedy. The play starts with King Leontes of Sicilia begging his childhood friend, King Polixenes of Bohemia, to extend his stay. When this is not successful Leontes asks his wife, Hermione, to convince Polixenes to stay, which she does. Then Leontes suddenly has the strange fear that Hermione is cheating on him with Polixenes, and the baby she is pregnant with is not Leontes. Leontes confesses these fears to Camillo, who says the King is crazy to think such a thing. Leontes then orders Camillo to poison Polixenes. Camillo agrees, but then confesses to Polixenes, and the two of them escape to Bohemia. Leontes then turns to his wife, accuses her publicly and then sends her to prison. While Leontes will not listen to everyone around him telling him he is mistaken, he does send for help from the Oracle to show everyone else he is correct. While in prison Hermione has a baby daughter, and her friend Paulina brings it before the Leontes. Leontes, certain in his accusations, orders Paulina’s husband to take the baby away and kill it. When the messengers arrive with word from the Oracle there is a public trial, and Hermione and Polixenes are cleared. Leontes tries to disagree, and as a consequence, his young son dies, and the queen faints. The Oracle has said that until the lost baby is found, the King will have no heir. Just when it can’t seem to get any worse, Paulina returns and tells Leontes that his wife has died. Just before intermission we see the baby, Perdita, being found by a shepherd, and the noble who was asked to take her is eaten by a bear.

The second act starts 16 years later, and Perdita is grown up. Camillo begs to return home to Sicilia, but Polixenes needs him. Polixenes’ son, Florizel, is often away from court and to find out why, Polixenes and Camillo disguise themselves and follow him. Florizel and Perdita are in love, and are about to be married during a county fair, when Polixenes reveals himself and forbids it. The young lovers are devoted and determined, so Camillo decides to help them, and at the same time help himself. He sends them to Sicilia, and then informs Polixenes so that he can follow. Once in Sicilia, it is discovered the Perdita is actually the lost daughter of Leontes, after the shepherd and his son bring the trinkets left with Perdita when she was a baby. There is much rejoicing, and they all decide to visit a statue of Hermione that Paulina has had commissioned. The statue is so lifelike that everyone is amazed and even more amazed when it turns out to be the living Hermione. The play ends with the queen forgiving Leontes and embracing her lost daughter, and the Leontes rewarding Camillo and Paulina by telling them to get married.

I have to say that I was rather impressed by this production of A Winter’s Tale, and in fact I enjoyed it more than when I had seen it before. The one thing that really stood out was the set. There was a neat video screen used as the backdrop that changed to show different parts that would have been hard to convey otherwise. After Leontes realizes his mistake, his dais raised at least two-story and appeared like a rusted metal tube. It was then augmented more at intermission to show the passage of time. Leontes spent most of the second half grieving up on that raised dais.

My favourite character during the play was Autolycus, a sort of petty thief. The actor who played him used a sort of languid campiness that worked. The way he could just walk around and obtained what he wanted, and the devious ways he made that happen were hilarious. He really caught the audience’s eye, and brought the humour that the second half wanted. Even better there was a concertina player that started to follow him around like a lost puppy. At first he allowed it and used it to his advantage, but then he would shout at the player to “Go home” and it was much funnier than I can describe (probably because the lines are nowhere in the actual play!).

I found the acting overall very well done. The only character that really bothered me was Perdita. The actor that played her seemed to use some country/farmer type accent that was rather heavy. I am no good with accents, so I have no idea what it was supposed to be. But I found it really jarring to listen to, especially as she was supposed to appear more than a humble shepherdess. I could understand if this was all done to show that she had been raised in a lowly village, but then I would expect the rest of the villagers to sound like her, and they didn’t.

My only other gripe about this performance was the bear. For those unfamiliar with Shakespeare there was supposedly only one stage direction that Shakespeare ever wrote, “Exeunt followed by Bear.” It is my favourite part of the story and the part I was most looking forward to. However, in this production, there was a CGI bear that appeared made out of water that was shown on the backdrop. I was not impressed. It was not particularly good CGI, and I wanted a person dressed as a bear or some other kitschy way of achieving that stage direction.

I think my biggest fault with this play is still the actual content of it. Not only are the two halves so different, but they are paced really strangely (practically irrelevant scenes take forever, and important information is presented in asides). In the first act, it is hard to figure out why Leontes gets it so stuck in his head that the two people he cares about most have betrayed him. Then in the second half, some of the main action happens off stage and the “chorus” tell us what has happened. I hate that in Greek plays, and think it is just lazy on the writer’s part.

Then there are the speeches and monologues in this play. I like speeches and monologues, and I know Shakespeare has written some amazing ones. But I find the speeches in this play particularly hard to follow, and uninteresting. That may have more to do with my general disinterest in the plot. Even having read the play right before I had trouble following some of the speeches in person, and found (more than once) that I had started to think of things I needed to do after the play!

Final Verdict: A good production, but only go if you are interested in the plot, as it is not one of the best stories.