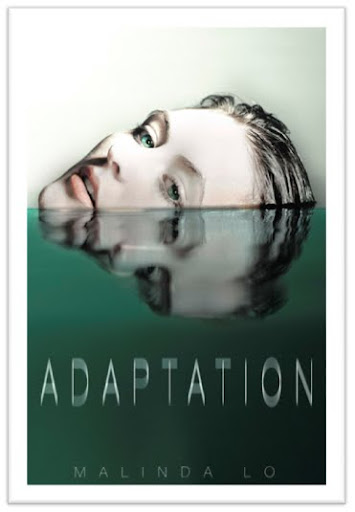 “When she sat down again she felt unsettled, as if the ordinary world had been knocked off-balance and everything was now listing slightly to one side.”
Adaptation by Malinda Lo

It was only a few years ago now that I was eagerly anticipating the release of Malinda Lo’s first book, Ash. I had read some of her posts on a blog that she was an editor for, and with news of a queer Cinderella, there was just so much to look forward to. Both Ash and the subsequent release Huntress, are two of my favorite books, and have been forced onto almost all of my friends (who then thanked me later). So it should go without saying that I was counting down to the release this book. There was only a slight niggle of fear, Adaptation would be set roughly in the here-and-now (more sophisticated people might say it is happening in a contemporary setting) and would be more of a science-fiction book; would she still be able to entrance me without the fantasy element?

Obtaining the book was a more difficult journey than I had expected. By chance, I was stateside for a visit when it was to be released. With one day between the release of the book and my return flight, I could not rely on a pre-order in case it came too late. But since the tragic end of the Border’s bookstore, there is really only one bookstore in my area (about 20-30 minute drive that is). I am not a fan of this store, its return policy, and most of all I HATE that I cannot access a computer to check where/if a book is in stock. (I have always been able to find my way around a book store, and the computers that Border’s had had around the store meant I could see if they carried the book, what section it should be in, and even what cover it had.) But once I made it to my bookstore, I tried in vain to find Adaptation. I was unsure what section they would put it in and searched most of the store. In the end I had to flag down a worker, wait as she had to do multiple, very slow computer searches as she asked me a ton of questions about the book (which made it clear she had never heard of Malinda Lo), and then instead of telling me where it was, I had to follow her like a lost puppy while she found the ONLY copy on the shelf. Obviously, I was not amused by the whole experience, and my friend who was with me was not able to buy the book as there had been only that one copy.

The plot is rather involved, but it starts with the main character seeing a flock of birds fall dead from the sky. This was actually happening around the world, and crashed an unknown number of airplanes. Reece, the main character, and her debate partner are stranded at the airport and decided to drive home, but on the way they are in horrible car crash. They wake up 27 days later at a military facility with no memory of those days or awareness of what has been happening in the world. The rest of the book is them trying to unravel what has happened to them, what is going on with the world (which is a strange mix of current life and Cold War era men in black suits and curfews), and who is on their side. All this while having to deal with being high school students on summer holidays.

The book more than made up for all the discomfort that I had to go through to obtain it. It is a book of substantial length, but a fast read. The chapters are short and the plot really moves along, and you have to keep reading to find out what happens next. The beginning is defiantly the best part, the second half is not as fast paced, and starts to hit the more science fiction end of the spectrum with much less of the thriller aspect that made the first half so engaging.

One of the most important things to realize about this book is that it not a standalone book. Adaptation 2 will be coming out later in the year, in 2013 (according to Lo’s blog/twitter posts). So while the book ends the first arc of the story, not everything is explained and there is a bit of a cliffhanger. But I think there is enough of a story that you can read this book without feeling short-changed.

I admit, I may not be the most unbiased person to review this story. I have loved Lo’s other two books, and read Ash at least once a year. I have also had several interactions with her on Twitter, which have only helped my belief that she is a really great person on top of being a good author. While I really enjoyed the book and will be passing it amongst my friends as with her previous books, I can see a couple things that might make it not as enjoyable for others. The first being that while her other books have had lesbian characters, Reese is most defiantly somewhere on the bi-spectrum. This is nice in that you are not sure who she is going to end up with, and even at the end of the book, I think there is room for interpretation. But for anyone expecting a straight or lesbian character, you are in for a surprise. Also, there is a distinctive X-Files type feel to this story, which at certain points may come across as a bit cheesy or farfetched. But I think this works with the overall themes, and especially with the heavy government involvement in the story.

Probably my favorite part of the story is just how real Reece is. I can identify with her because she is a confused high school student. She loves her parents, but there are things that are not easy to talk to them about. She is still figuring out who she is, and her place in the world. Her love of her town, her interactions with those around her, and her strength in the tough situations make her feel so human. The background characters are fascinating and entertaining. I especially liked some of the government agents assigned to her.

Final Verdict: Take the Plunge. If you don’t like conspiracy theories and a little sci-fi give it a pass, but everyone else should run and get it!

Adaptation by Malinda Lo isn’t a book that I would usually pick up and read. It’s a modern, sci-fi novel that’s about conspiracies. I usually steer clear of sci-fi as I find them too full of jargon; which annoys me. Lynne recommended that I read it though, so I did.

Adaptation follows Reese and David, two high-school students who are competing in a debate competition. On June 19, the day they are travelling home, strange things start to happen. It begins with flocks of birds diving into planes and causing a dozen or more to crash. Reese and David desperately try to get home, but a bird flies into their headlights along a stretch of road near the Nevada desert. This first portion of the book is incredibly exciting. Lo takes the reader on a whirlwind ride that will leave you gasping and re-reading sentences with one question on your mind – did that really happen? I could not put this book down!

Well, I couldn’t until I got to the part of the book titled, “27 days later”. Considering the ending of the first part and the title, I half wondered whether I was going to turn the page and find that zombies had taken over the world. I didn’t, thank god! This part of the book starts off exciting, as Reese wakes up in a military hospital and you try to figure out how she’s been healed. The pace is considerably slower in comparison to the first part, and it feels like there’s a little too much padding. For this part of the book, I wasn’t desperately turning the pages as I had been before. I took a casual read through the pages, and even went a day or two without reading a page. Some cools things do happen, like scars and cuts disappearing, strange dreams and mysterious abilities. That’s why I kept reading. But, there’s a little too much filling in between each one. There’s also too much speculation about conspiracies involving the government and area 51, and the book seems to get a little lost in a romance. I should probably point out at this point that if you’re a little bit prudish, like I am, you might find yourself blushing on a few pages. It’s nothing like Fifty Shades of Grey, but it’s m
The last third of the book picks up again. It’s not as fast paced and exciting as the first part still, but I started reading more. ore intimate than what I’m used to in the average fantasy book.

Part of the mystery unfolds and Lo hits you with a big reveal. I’m not sure how I feel about it. I didn’t see it coming, which is good because I hate predictable plots, but I think I didn’t see it coming for the wrong reasons. It’s a little far-fetched. That might just be because I’m not used to sci-fi and I’m not a massive fan of conspiracies but…

I think the overall problem with this book is that the beginning is so epic that I kept waiting for it to reach that bar again, but it didn’t. I would recommend people read this, and I’m sure you’ll like it, just not love it. However, I think that if you like conspiracies or sci-fi you’ll love it.

I would just like to make one final comment. I was impressed with how well Lo described her characters feelings without spoon feeding me with emotion labels. Lo is a talented writer and it made the book more enjoyable.

Final Verdict: A good book, but not one that you’ll be reading as you walk.