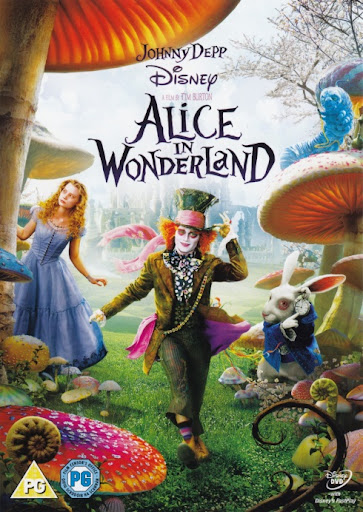 “Sometimes I believe in as many as six impossible things before breakfast.”
Alice Kingsley in Alice in Wonderland

Alice in Wonderland is an up-to-date movie adaptation of the classic books Alice in Wonderland and Through the Looking Glass by Lewis Carroll. The movie is a mix of live acting and computer animation, creating a fabulous version of what Lewis Carroll describes in his novels. The mix is very well done, with only a few places where the animation stands out as animation. In comparison to other live action/animation, this is one of the best I’ve seen.

Alice in Wonderland tells of Alice’s return to Underland at 19 years old. At the beginning of the movie, Alice is at a garden party hosted by Lord Ascot. Hamish, Lord Ascot’s son, publicly proposes to Alice leaving her speechless because it is clear that they have nothing in common. As she is thinking, she sees the white rabbit in a waistcoat that she has been chasing around the garden party. She rushes off into the gardens, telling Hamish that she needs a moment to think. She follows the rabbit to a rabbit hole and falls in. She tumbles down and down, passing an array of things (e.g., a bed) until she tumbles through the floor of a room. The room is round and has many doors. Alice finds a key and tries them all, only to find that the key fits into a door that is much too small for her to climb through. Alice shrinks herself by drinking from a bottle labelled “drink me” to get through the door, although it takes a few tries to get everything right. Once in Underland she meets some familiar faces. One of those faces is Absolem, a blue caterpillar. He reveals the Oraculum, the compendium of Underland, which shows Alice slaying the Jabberwocky on Frabjous day. Alice claims that she cannot slay anything, and there is some doubt over whether she is the correct Alice.

The Red Queen’s army interrupts and captures almost all of the creatures she has met since arriving in Underland. Alice is hurt and left alone in Underland. She happens upon the Chesire Cat who takes her to the Mad Hatter, but the Red Queen’s army aren’t far behind and again, everyone but Alice is captured. The Oraculum foretells that Alice will go to the White Queen’s castle, but will Alice do what the Oraculum foretells? Or will she risk everything to free her friends from the clutches of the Red Queen? Finally, will she slay the Jabberwocky as foretold, and end the reign of the Red Queen?

Here is the movie trailer (which is amazing in and of itself!)

Mia Wasikowska is a perfect cast for Alice. Not only does Wasikowska look the part, but she manages to portray the stubborn and indignant side of Alice really well. The scenes in Alice in Wonderland fit perfectly with Wasikowska’s acting. For example, at the beginning of the movie, Alice’s mother realizes that Alice is not wearing her corset or her stockings. She chides Alice for not being properly dressed. Alice’s response is, “Who’s to say what’s proper? What if it were agreed that “proper” meant wearing a codfish on your head? Would you wear it?”

The cinematography throughout this movie is astounding. I’ve already mentioned that the mix of live action and computer animation worked almost seamlessly. However, there is one scene where Alice grows and the computer animation is fairly obvious (there are only a few of these moments though). Underland itself is also spectacular. The bright colours used in the landscape and in the characters contrasts with the greyish colouring used in the first 10 minutes of the film when Alice is attending the garden party. I liked how Tim Burton brought in many familiar characters from both Alice in Wonderland and Through the Looking Glass. Within the first few minutes of Alice being in Underland, the viewer has already seen the White Rabbit, the flowers with faces, the dodo bird, Tweedle Dee and Tweddle Dum and Absolem, the caterpillar. I liked the modern take on the animation for the characters also. For example, the Cheshire Cat is grey with blue stripes and he naturally grins when he talks. The evaporating in smoke was also different and worked really well. Aside from the animation, I thought that the casting of the actors to provide the voices for the animated characters was genius in places. For example, Absolem is played by Alan Rickman. Rickman’s voice is perfect for Absolem, and he really managed to put across the condescension in his voice that is Absolem. Then there is the Cheshire Cat who is played by Stephen Fry. Again, this is a perfect match. I wasn’t expecting such a deep voice for a blue striped cat, but it worked so well.

The costume for the Red Queen (played by Helena Bonham Carter) was also brilliant with many hearts on the front of the skirt, and a heart painted onto her lips. Even her hair was styled in the shape of a heart and her shoes have hearts on the bottom. The heart theme extended into the styling for the Red Queen’s castle. If you look closely, there are hearts everywhere (e.g., windows, floor, doors, building features and garden). I only noticed that the monkey’s tails (who hold up seats) curl in towards each other to make a heart, the last time I watched the movie. The White Queen (played by Anne Hathaway) in contrast wears all white (white princess-like gowns and white hair). The only thing I didn’t like about the White Queen’s styling was the dark eyebrows. I think dark eyebrows are fine, but the eyebrows on the White Queen were very dark. I think it would have been better if the eyebrows were slightly lighter. I do like how graceful and ethereal the White Queen’s movements were. It really fit with her character.

I do lose interest a little once Alice reaches the White Queen’s court. I’m not sure why. I think the pacing slows a little in comparison to the rest of the movie. I also think that the start of the movie is stronger than the ending.