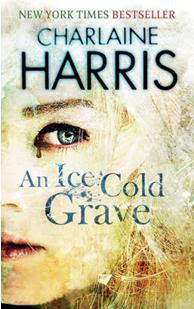 “But men are less used to the idea of being raped than women are, and it strikes them with a fresh horror. With women, that horror comes right along with the female genitals.”
Harper Connelly, An Ice Cold Grave by Charlaine Harris

The Harper Connelly Mysteries just keep getting better. The main over-arching storyline is the same throughout the first three of the books in this series; Harper is called in to find a missing dead body/identify the cause of death, Harper is attacked, Harper figures out who the murderer is and the book ends with some sort of show down. Yet for some reason, it doesn’t feel like I’m rereading the same book with a slightly different mystery to solve. I don’t know why because I would usually be frustrated with such high levels of predictability. I guess it boils down to the mysteries being so enthralling and well done that it doesn’t matter that a few plot points are inevitably the same

In An Ice Cold Grave, Harper and Tolliver visit Doraville, a small town in South Carolina. Over a few years, six boys have disappeared. They were all believed by the Sheriff to be runaways or suicides, despite a few of the boys’ cars being abandoned with all their possessions inside, or a backpack/cell phone/hat being found. There is a new Sheriff in town now, and she believes they have been murdered. The town pull together and pay Harper to find the bodies. Harper is taken to several locations where items have been found. This leads Harper to locate eight bodies, yes eight. Soon after, Harper is attacked which leaves her in hospital, lucky to be alive! Will Harper survive long enough to get out of Doraville? The only way might be for Harper to play detective and solve the mystery.

With the Harper Connelly Mysteries, I always sort of figure out ‘whodunnit’. In the first book, Grave Sight, I figured out who the murderer was and the motive fairly early on, but I was in constant doubt. In the second book, Grave Surprise, I had stronger suspicions from about the half-way point, but I couldn’t fathom the motive. In the third book, An Ice Cold Grave, the motive was obvious. The person responsible was more difficult to figure out. I got part of it, but the other part was a surprise. I like having to figure out the mystery, but I don’t like to read mysteries where the answer is obvious. I also like that if you had been paying close attention, you could have spotted the murderer through something they said. I didn’t spot it until I was told, but I went back and sure enough, it’s there.

The romance between Harper and Tolliver finally comes out. It has been very obvious, sometimes a little painfully obvious in places. I’m not sure how I feel about this. On the one hand, I think they are well suited and I wanted Harper to say something. Plus, they aren’t biologically related. On the other hand, they call each other brother and sister, which is weird. Harper tries to abstain from the habit, but at least in this book, she doesn’t succeed. I think that’s the part that weird’s me out. That she still thinks of him as a brother, and yet not a brother. You’ll have to read it to understand what I mean. On the whole, I think its fine because while they grew up together, it’s the same as growing up with a close friend from childhood. I just wish Harris wouldn’t mention the fact that they aren’t biologically related so often. I was a tad surprised at the level of detail that Harris includes about Harper and Tolliver’s relationship. While I should have expected this after reading the True Blood series, which all contain graphic physical scenes, the tone of this book was so different that it threw me.

The showdown at the end of An Ice Cold Grave is the best yet. There were points when I really wasn’t sure that Harper was going to make it. The only thing that kept me sure was the knowledge of a fourth book in the series, Grave Secret. This showdown was particularly brutal and I admire how Harper handled it. She continued to fight for her life and almost died trying to warn someone she endangered.

Please click on the names of the other books in the series to read these reviews: Grave Sight (book one), Grave Surprise (book two) and Grave Secret (book four).