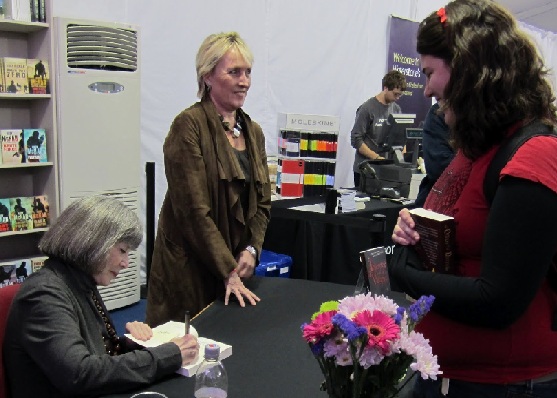 “Ignore any loss of nerve, ignore any loss of self-confidence, ignore any doubt or confusion. Move on believing in love, in peace, and harmony, and in great accomplishment. Remember joy isn’t a stranger to you. You are winning and you are strong. Love. Love first, love always, love forever. ”
Anne Rice

As a middle school student (roughly 12-13 years old), I discovered a wonderful book about vampires. The author was described as a “young Anne Rice.” I knew then that I had to find a book by this original author (one, who upon reflection, I had heard of but never noted). From the moment I first picked up Interview with the Vampire, I knew I was in love. So imagine my joy at having left America only to find one of my favorite American authors was going to be speaking just down the road, and tickets were still available. Grabbing a friend who was also a fan, and with a couple of her books, I ventured to Cheltenham.

For those unfamiliar with it, The Times Cheltenham Literature Festival, is an amazing event. In a picturesque little town, two parks are filled with people and tents. And above all books!! Authors are brought in to be interviewed, read excerpts, and give their opinions. There is a little bit of everything, and everyone can find something to look forward to. There are tents full of books by the authors, perfect if you want to get a copy signed. The staff was friendly and helpful, especially when we got a little bit turned around. There were also some amazing food stalls, including Pie Minister, crepes, and ice cream. It is an amazing little oasis for those who love books.

Finding the town hall where Anne was supposed to be was easy enough. Even though we were a little early, there was already a large line of dedicated fans waiting eagerly to be let in (even though we had assigned seats). Several people in line were decked out in elegant Gothic ensembles, which told me we were in the right place. Standing in line, I could hear snippets of conversations. Some people talked about previous times of hearing Anne speak, others about when they had first read her books, and still others about the impact she has had on their lives. It hit me then, in that moment, just how big of celebrity she is.

We were soon ushered into a beautiful and large room. It was a little too large, as our seats were halfway back in the room, but we were the last row of fans. There was an excited buzz in the room, but everyone fell instantly silent when a woman climbed up on stage. She introduced Anne and her accomplishments, and there was a loud applause as Anne took her seat on stage.

For those of you who are unfamiliar with her, Anne Rice is a very distinguished looking woman, but smiles freely. She is 70 but looks in her 50s, with a steel colored bob. Her image was projected onto the screen behind her, so that even in the back we could see her face (even though we were really not that far away). After the initial banter with the interviewer, we were treated to information about Anne. She answered about how her upbringing in New Orleans shaped her view of how people treat death. Death was such a part of life in New Orleans, but they kept the memories of those who had passed close (by such methods as talking about them as if they were present).

One of the most eloquent discussions was about Anne’s view on God and religion. There was an announcement a couple of years ago that Anne had gone back to her Catholic faith, and would only be writing about biblical themes (but she was clear that she did not agree with the church about their views on homosexuality, as her son and many friends are gay). However, this past year there was a short message from Anne to her followers on Facebook informing them that she was leaving the Catholic Church, but that her faith was still very important to her. It started a minor uproar on the net. Anne was asked about this and if it was still true. It was a very interesting talk about how faith and religion are not the same thing.

Another interesting question put forward by an audience member was about the rise in technology and the ability to connect with readers. Anne was very clear that she loves it, and she is very active on Facebook. In the interest of full disclosure I feel I should mention that I am one of those who follows Anne on Facebook. It really is her on the website, and she takes time to interact with her fans, and also facilitate discussion on a wide range of topics. She even recognizes certain users as particularly active on her page. It is great to see a well known author embracing current technology and taking advantage of all the opportunities it provides.

In what felt like no time at all, Anne and the interviewer were saying their farewells. However, this was when the real excitement began, as Anne was going to be signing books in the next tent. My friend and I were very lucky; we knew where the tent was and were roughly 20th in line. This doesn’t sound very close to the front, but when we left later the line wrapped out the door and down past several other tents. But again we had the chance to observe the excitement of the other fans. The eavesdropping was fascinating, as well as seeing some of the extremely well loved copies that people had brought to be signed. An assistant came through handing out sticky notes for those who wanted the autograph personalized. I had a copy of the Queen of the Damned for myself, and a copy of Interview with the Vampire for my brother for Christmas. My friend took my picture as Anne signed my books. I was very pleased when Anne said I had a beautiful name (unfortunately that is not the name I go by here). I was a bit too tongue tied to same much more than ‘Thank you’ and smile like an idiot!

As we walked away from the festival with our signed books, the one thing my friend and I could not stop talking about was just how wonderful Anne had been. The word that sprang to mind was a true ‘Lady’. She was eloquent and intelligent, which was not a surprise, but she did not suffer fools. But she was appreciative of her fans and gracious to us. For a woman who almost everyone has at least heard of, she is surprisingly down to earth. And I can say my interest in her books has been revived and made stronger. Thank you Anne for the amazing memories!

Final Verdict: An Excellent Adventure- If given the chance: pack your bag and run to the event!