As seen in Stratford-Upon-Avon, England
Written by William Shakespeare
20 April 2013 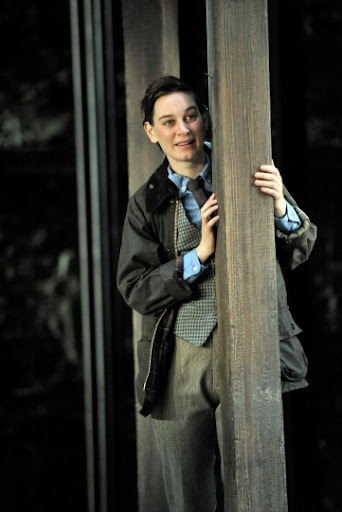 “All the world’s a stage,
And all the men and women merely players;
They have their exits and their entrances,
And one man in his time plays many parts,
His acts being seven ages.”
As You Like It by William Shakespeare

In high school, I first read As You Like It and I loved it. The plot reminded me of my favorite, Twelfth Night. It became even funnier when I thought about how it would have traditionally been performed with all male actors; there is a scene where a male actor plays a woman masquerading as a man pretending to be a woman! Now that is a brain teaser! As I have grown so too has my understanding of the play, and I now really appreciate some of Rosalind’s insights about love. This is my first time seeing it live and I was super excited to finally see it.

The play starts just after the Duke Ferdinand has usurped his brother, Duke Senior, and banished Senior to the woods. Several nobles, in protest of this treatment of Senior, abandon their lands and move to the forest with Senior. Fredrick has allowed Senior’s daughter, Rosalind, to stay in court because his own daughter, Celia, is inseparable from her cousin. One day at court, Rosalind and Celia are asked to try and persuade a young man from wrestling as he looks like he cannot win, but the young man, Orlando, unexpectedly wins. After the match, he and Rosalind fall in love but are too tongue tied to say anything. Frederick asks who Orlando is, and is not pleased to find out that Orlando is one of the sons of a man Frederick does not like. Orlando is told by a noble to flee as Frederick is most displeased, but upon returning home, Orlando finds that his feud with his older brother (mostly about the older brother not following their late father’s wishes to treat Orlando well), has boiled over, and that his eldest brother, Oliver, plans to kill him. Fleeing with an old servant, Orlando heads for the woods. Back at court, Frederick decides that Rosalind must go and even Celia cannot persuade him to let her stay. Rather than leaving her cousin to fend for herself, Celia joins Rosalind and, together with the court jester, they head for the woods but not without disguises. Celia becomes a sheppardess, and Rosalind dresses as a man. They buy a cottage in the woods and begin living there. Orlando, by this point, has stumbled upon Senior and his men, and joined with them. Now with some free time, Orlando posts love poems on every tree about his love for Rosalind, poems that Rosalind finds. She eventually runs into Orlando and convinces him that she (acting as a man) can persuade him out of love, if only he will pretend she is Rosalind and try to woo her. This works for a bit but when Oliver is sent to kill Orlando and Orlando saves Oliver, the game ends. Still in disguise, Rosalind organizes a big reveal and wedding, where 4 couples get married. The celebration continues when Frederick has a change of heart and becomes a monk and returns all of Senior’s lands and titles.

As you might have been able to guess, from my predisposition to the play, I loved it. I really enjoyed this staging (even if I have not seen other ones). It was fun almost the whole way through, and made for a very nice day out.

One of my favorite things was the use of the costumes. There was a clear differentiation between the clothes in the court and those in the woods. In the court, everyone was in suits or evening gowns. The colors were dark, mostly blacks, with hints of gold and silver. Everything was stiff and formal, and a bit somber. This contrasted wonderfully with the scenes in the woods. Imagine if hipsters and hiking gear bumped into each other; there you have the style of Duke Senior’s company in the woods. It was colorful, fun, and often mismatched a bit. I never thought I would see someone pretending to be a Duke in tight leather trousers (at probably 60 years of age). The contrast between the two dukes was very apparent. Duke Ferdinand was not only in his suit, but he was a larger man with a bald head, and a permanent scowl. The Duke Senior was a thin man with shoulder length grey hair, and a hint of a smile in every seen.

My favorite thing about the play, though, was the leads. I have seen the two leads, Alex Wladmann and Pippa Nixon, several times now, and have almost always enjoyed their presences. Waldmann, still reminding me of Elijah Woods, was believable as a younger son discontent with his brother’s treatment. I was a bit concerned going in to see his wrestling scene as he is not the largest of men, and I was not sure if his fight would be believable. However, the director must have realized this, and Orlando did not immediately win, instead he was thrashed pretty badly until he surprises the other fighter at the end. This worked for me, even if the choreography was a little sloppy.

The chemistry between Waldmann and Nixon was what really made the second half of the play. From the first look, you could believe that they were in love and you cheered for them. Then when Orlando is wandering the woods, posting his badly written sonnets everywhere, it makes you smile (even while you cringe at it). It helped that Waldmann was able to bring out Orlando’s uncertainty over whether Ganymede really is Rosalind or not, which makes his trials more understandable.

However, it was Nixon who stole the show, and in the play is meant to steal the show. It was strange seeing her with long hair while at the Duke’s court, since having seen her in Hamlet, I knew she had short hair. But it is when she is dressed as Ganymede that she comes into her own. She is believable as a male, in a good way. My favorite though, was to watch her switch from Rosalind when she is with her cousin, to Ganymede when others are about. My only problem was that upon discovering that Orlando is in the woods, she immediately panics and pulls down her trousers. Again there seems to be a theme that when I see Nixon on stage she will either be stripped or sexually assaulted. But thankfully it was quick.

The reunion of Orlando and Rosalind at their marriage was really amazing. The two actors really made it so believable. The was so much revelry in the final scene that it was hard to quiet down enough to listen to Rosalind’s famous closing speech.

There were just two things that I wasn’t as fond of. The first was that a scene I was looking forward to was missing. In the text, Rosalind (in her male role) confirms with everyone that when she performs her magic (i.e. makes Rosalind appear), everyone will keep their word about who they will marry, and then she goes off stage and transforms back into herself. Yet in this production, they cut that bit, and instead she is only seen on the wedding day as herself. I understand that it is difficult to have a quick change, but that was why I was looking forward to it. It felt a bit like they cheated.

The other thing I was not fond of was Touchstone, the jester. He was shirtless for most of the play and in basically just tights. It was not a pretty sight, and he reminded me of the old hobo clowns, only half dressed. Seeing his romance was equally disturbing. I am not sure what I was expecting, but I cannot see Duke Senior or Ferdinand having been fond of him. It was also strange, with this creepy appearance, to understand why Rosalind and her cousin wanted to bring him with them.

Final Verdict: A fun play, and a great production of it. If you are new to Shakespeare, this is a great way to start!