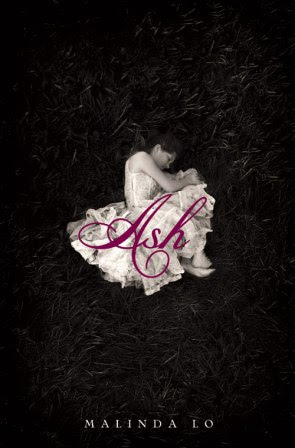 “To charge someone with love is a great responsibility; there will be an equal yet unexpected reaction…The knowledge will change him.”
Ash by Malinda Lo

I have to come right out and say it; this is one of my favorite books of all times. I do not know how many times I have read it since it was published, at least 10 times. It was the first book I bought upon arriving in the UK, and I now own three versions of it (the USA, UK, and e-book). I have also forced at least five of my friends to read the book (I say forced, what I mean is that I raved about it and handed it to them and let them decide to read it!). I have also had twitter response from Malinda Lo in regard to things I have posted about it. So having said that I will attempt to give a more unbiased review, but that may be close to impossible.

I remember hearing about the book before it was published as I followed a website that Lo use to write and blog for. Upon hearing that it would be a retelling of Cinderella I was already sold, but when you add in that it was going to include a lesbian Cinderella, I could not wait to get my hands on a copy. It is also one of the few books that has queer characters, but is not a coming out story; instead it is a great story where the characters just happen to be women who fall in love with a woman.

The basic story of Ash is Cinderella, but the way Lo tells it is unlike any other versions I have ever read. The story starts with the death of the main character’s mother. Aisling, or Ash, was close to her mother, and this death is something that she will keep fresh and new in her heart for the majority of the book. Within the first year after her mother’s death, her father remarries; giving Ash a new step-mother and two step-sisters, but then her father becomes ill and dies as well. When a letter arrives, informing her step-mother that her father had massive debts, Ash loses her position in the home and is forced to become a servant. Ash learns how to keep the house, but there is part of her that feels connected to The Woods and the possibility of the fairies from all her mother’s story being true. With the loss of her mother, and everything she loved, she is driven into dangerous situations in an attempt to contact the fairies to try and bargain to bring her mother back, even if that is beyond their power to do. In the woods she meets her first friend, if that is what he can be called, the fairy Sidhean. As the years pass she keeps the house, but her only escape is when she wanders in The Woods, sometimes with Sidhean sometimes alone. But then the King’s Huntress, Kaisa, seems to be placed in her path several times, and Ash feels a strange draw to her. This draw and the strange new friendship she starts with Kaisa starts to change everything. Ash is finally being called into the fairy world, but now she has some doubts if that is what she really wants anymore. And she learns that when you make a wish to a fairy there is a price to pay, and it may be more than she is willing to give up. But unlike other versions of Cinderella, Ash knows is it up to her to save herself.

It is a wonderful story that has a decent pacing. It is a little slow at times when Ash cannot move past her mother’s death, but I think it is important to show why she is so reckless and willing to offer herself to the fairies. One of my favorite aspects of the book is that the fairies in this story, and the stories told in the book, are of the old school kind. They are not pretty little pixies that just grant wishes. Instead they are dangerous creatures that never do anything without asking for a price in return. For her wish to attend the ball there is a large price, one that Ash does not realize completely until after she has struck the bargain.

I also enjoy the use of fairy and hunting stories within the novel. These stories help the plot move, but they also allow us as the readers a better idea of world that we are intruding on. When Kaisa, the King’s Huntress, tells Ash her favorite story, I think it reveals so much about her character. She favors stories where the Huntresses prove people wrong while they save the day.

The relationships that Ash finds herself in are very believable. With Sidhean, he has been her only friend for so long, and he has a presence that just seems to swallow everything else up. But it is a very different kind of love than what Ash comes to share with Kaisa. The building of the relationship between the two women is awkward, tentative and so believable. We watch as they learn to be friends and the tense pauses when looks and hands linger too long in ordinary tasks.

Unlike so many versions of Cinderella, Ash is a strong character and helps decide her own fate. While she needs help getting to the ball, and has trouble with her stepfamily, it is ultimately up to her to save herself. And with some help from her dead mother, she is able to fight for what she wants, and stand up to everything in her way.

I recommend this for any fairytale lover and especially any young girl who is questioning her sexuality. In the book, most people appear to be straight. But there is no stigma when people talk about women with other women (there was not a single mention of a male/male couple). One of my favorite lines is when a man comes to ask a woman, who Ash is talking to, to dance, but he makes sure the woman was not asking Ash to dance and that he had interrupted them!

Final Verdict: Go and buy a copy now, you will want to re-read this! A great book and a great comfort read.

If you enjoyed this story, Lo continues to explore this world with a prequel set centuries before in Huntress.