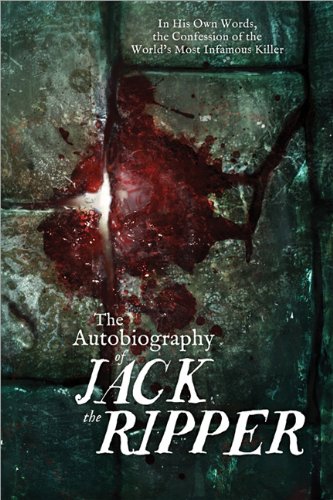 “And so it may come as a surprise to some that J.R. was a human man and that what he did was due to reactions which simply differed in some respects from the reactions of his fellows.”
Autobiography of Jack the Ripper by James Carnac

As someone who has made my life’s work to study criminals, I have always been fascinated by Jack the Ripper. While I would not consider myself a true Ripperologist, I still read a lot about the famous Whitechapel murders. So when I saw a book about Jack the Ripper on Netgalley, I could not pass. It was with reserved excitement that I began the book.

*Note: I requested this book because I thought it was a fictional account, however it is being presented as if this manuscript was really found. From what I can find, it seems to be classified as non-fiction. That being said, I read it as if it was fiction, and am extremely skeptical of its “origins.”

Unfortunately, I cannot give much more of a summary of this book than that it is the life of Jack the Ripper. “Jack” wrote out his memoires many years after the famous murders and sent the pages to be published after his death. There is a little bit at the beginning to build the back-story about these papers having been passed from different people before someone believed the story enough to try and get it published.

I am not going to lie, this was painful for me to get through, and I really wanted to put it down pretty much the whole way through. With some shame, I will admit, that I really only skimmed the last 50 or so pages–the parts after the manuscript that are supposed to be the historical checking of the story (really just a re-hash of the ‘memoir’ with lots of family histories). Parts of this book really didn’t work for me with my understanding of criminal psychology, and some of the experts’ testimonies really bothered me. The main thing that upset me was a bit claiming that offender profiling hadn’t been ‘invented’ when this was ‘written’. Yet, profiling has been around in some form since the Romans, and it was attempted with Jack the Ripper (source David Canter, 2010).

The story itself is verbose and horribly paced. It is not until about the 28th page that we make it to the part written by James Carnac, the man claiming to be Jack the Ripper (or J.R. for short). The various letters and comments before that were boring when are trite if it is fiction, or boring if it is really a found manuscript. When Carnac starts writing, it is a long ramble musing about his impact as Jack the Ripper and the misconceptions, but also about what those who knew him would think to know it was him. However, what threw me the most while reading was that it was the recounting of an old man, so I knew going into the ‘memoir’ that he survived a long time after the murders. I will come back to this point later. Overall, Carnac just didn’t fit with my personal view of who Jack was, and I never grew to care about any part of Carnac’s story.

I will admit, one of the parts I was looking forward to was the actual murder spree. I was looking forward to reading about his feelings and emotions during this part, and I was completely disappointed. There was almost nothing more than a dry recounting of what happened, and even then without most of the details. The emotions in this part were almost completely missing; there is no talk of excitement or release after the murders, nothing really emotional at all. I was hoping for some sort of compulsion, but it was mostly about a need to see blood that then he never seems to notice during the killings. This may be in part due to the fact that the first man to read the ‘manuscript’ supposedly took out some disagreeable part, but really if this is fiction it fell flat.

The most disappointing thing for me was the part after the murders. To my understanding, serial killers don’t just stop killing, they will keep killing until they are caught, killed or incapacitated. However, Carnac is never caught or killed, but stops killing. It could be argued that he is incapacitated, but I would argue that he could easily have killed in his state. However, the most jarring part was that his urge to kill just seemed to fade. This just doesn’t match with what forensic psychology says, and based on the absolute frenzy that was his last crime scene, this would not be the case.

Overall, I was bored and never connected to any part of the story. I feel that this has to be fiction, and was bored that it perpetuated old theories about Jack the Ripper and serial killers (that he had some medical knowledge, and that he came from a family of killers). I honestly could not wait to finish the book and clear it off my e-reader (which it caused to freeze several times…).

Final Verdict: Avoid this book. If you want facts read a book by someone who has conducted research, or if you want fiction about Jack the Ripper, read something else.