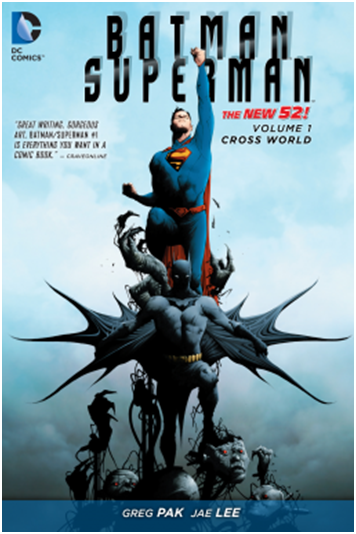 “I’ve come to find the most dangerous men on your planet. And here they are. You don’t mind if I borrow them for a while do you?”
Batman/Superman Vol. 1 by Greg Pak, Jae Lee and Ben Oliver

This story has Batman and Superman at the beginnings of their superhero careers. As Batman is investigating the death of one of Wyane Tech’s employees, Superman turns up and assumes Batman is the villain. They begin to fight, but before things can be resolved, Kaiyo (the Chaos Bringer) transports the pair to another version of Earth (Earth-2 or something like that). In this new world, both encounter older versions of themselves. Not only are they older, with stable lives and loves, but many of the events that shaped them are drastically different, hinting that the younger versions are from a far more corrupt and dark world than their older counterparts. As all four men struggle with the implications of their meeting, Kaiyo continues causing trouble and forces them to all work together. However, what is Kaiyo’s ultimate goal in all of this? And will the four be able to work together long enough to figure that out?

There is also an additional story with the origins of the villain Darkseid. However, due to a technical glitch, I was unable to read this section, so I cannot comment on it.

I received an ARC of this comic after a request to Netgalley. I am a huge Batman fan, but have never actually read the comics. Superman, however, has never been one of my favorite heroes, but I was willing to look past this to read a Batman story. While I have not read either of their comics before, I am no comic book novice (I regularly read several comics and review many others); having said that, I found this story rather hard to follow. From reading other people’s reviews, I can see that I am not alone in this. The plot is rather convoluted, and even after finishing reading it, I am not really sure what actually happened. Worse, I found it really difficult to keep track of which two were the younger superheroes and which the older versions of the superheroes. With Superman there is the advantage that the younger one is in a more casual version of his iconic suit. However, I could not distinguish which Batman was which when they had their cowl’s on. I am usually able to pick up on many small things and use context to help, but even with that, I still was never sure which Batman was which!

Besides the confusion I had, I did enjoy watching the younger and older versions interact with themselves, especially the Batmans. I have always loved how smart Bruce Wayne is, and it was great to see them figure things out quickly, especially as they are still very similar. The Supermans, however, are much more dissimilar. This mostly stems from the fact that the Kents (his adopted parents) in the younger version have died, and now Clark is very angry and not the nice guy we usually think of. Usually I like brooding and slightly angry characters, but for a Superman, it didn’t really work for me. 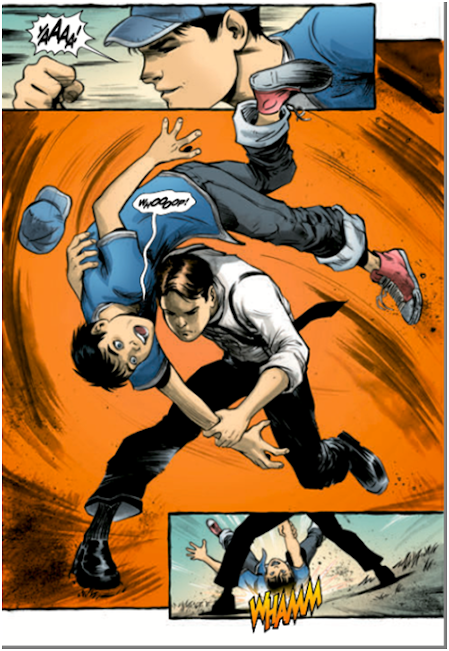 There were two other parts that I really enjoyed. The first was the flashback to how the older versions became friends. In their world, they have been friends for 20 years, and it all started after Alfred and Bruce’s car broke down near the Kent’s farm. The two boys don’t necessarily get along well at first, but their caregivers give them some space and they figure out that they are not like other kids. Really it comes down to one line, which I love. Young Clark has to hide himself from everyone so his powers don’t scare others. Bruce, though, is not scared of him, and, in fact, seems to like to try and provoke Clark. So as Clark recalls, “For twenty years Bruce has been my best friend, because he was never scared.”

My other favorite part was the women in the story. I was very excited to see many of the famous DC women; Lois Lane, Wonder Woman, and Catwoman/Selina Kyle. Even better was that they were not only present, but awesome. Wonder Woman and Catwoman figure things out so much faster than the boys. They even begin to work together to help out the boys, which was epic! 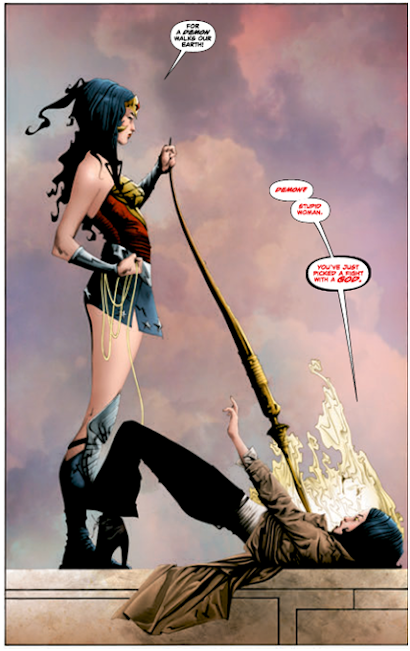 The artwork was not some of my favorite. There were some very pretty drawings and layouts (especially involving Catwoman!). However, there were some very ugly ones as well. I think poor Superman ended up rather piggish in some of the art, which was just not pleasant.

Overall, it was interesting to read, but not enough for me to love it. I will not be buying this, nor do I feel compelled to read the next installment, unless I borrow it from someone or receive a free copy.

Final Verdict: Not as great as this combination should be (especially as there are two Batmans and Supermans), but worth a read if you are interested or get a free copy.