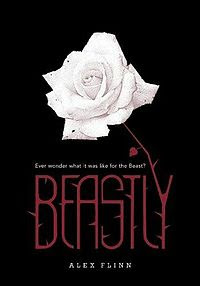 “You are ugly now, on the inside, where it matters most…you are beastly.”
Beastly by Alex Flinn

Beastly is a re-telling of Beauty and the Beast with a modern twist. I actually picked up this book after watching the movie adaptation of Beastly (I am so glad that I did because the book is so much better). I was curious to find out whether the author had given Kyle Kingsbury the tattoos and scars, or if this was the movie makers’ decision. It turns out this was the movie makers decision, thankfully as Kyle is your more typical Beast in Beastly, “not quite wolf or bear, gorilla or dog but a horrible new creature who walks upright,” in the book.

The story follows Kyle Kingsbury, a high school student, who has it all. He is good looking and popular. He has an ugly personality though and is often found saying things like, “when you’re a kid, they tell you that it’s what’s on the inside that counts. Looks don’t matter. But that’s not true. Guys like Phoebus in The Hunchback, or Dorian, or the old Kyle Kingsbury—they can be scumbags to women and still get away with it because they’re good-looking. Being ugly is a kind of prisoner.” He openly bullies people who are not good-looking, but this back fires when he picks on a witch. The witch, Kendra, puts a spell on Kyle, turning him into a beast. She gives him two years to fall in love with someone and be loved in return. The spell will then be broken with a kiss. Can Kyle change that much that fast, or will he remain a beast forever?

Beastly is one of the best modern retellings of Beauty and the Beast that I’ve read. It is a quick read with only 320 pages; I think I read this in two days. I like the fact that the main character is a male and that the book is written from the perspective of the Beast versus the Beauty. This was refreshing to read as it gives the classic tale depth.

I really enjoy Kyle’s personal transformation in the book. At first, he is arrogant and rude, and he clearly doesn’t care about anyone but himself. He is often seen publicly humiliating students because they aren’t “beautiful”. I found it easy to dislike Kyle because he reminded me of so many of the boys who went to my school.

I really liked the part of the book just after Kendra transforms Kyle into a Beast on the outside to match his beastly personality. Kyle is an angry and impatient Beast. He attacks Kendra once she has cast the spell and swears he will kill her if she doesn’t change him back. When this doesn’t work, Kyle attempts other ways of turning himself back (e.g., shaving his fur off). When Kyle realizes none of this will work, he sulks alone for months. This took me back to the Disney Beauty and the Beast retelling whose portrayal of an angry Beast. I don’t think any other Beast, since Disney’s Beast has really portrayed the anger of the Beast well, but I think Flinn does a decent job.

At this point, it is still difficult to like Kyle, but I didn’t sympathize with Kyle once I saw how his dad treated him. His dad is just like Kyle and thinks looks are what is important. When his dad realizes that surgery won’t fix Kyle, he buys an apartment and sends Kyle to live there with a maid and a blind tutor.

Things take a turn for the better once Kyle spends time with Linda. He wants her to like him and, at first, he tries to buy her by giving her material things just as he would have done before the transformation. This doesn’t work and it is only when Linda sees the true Kyle as they are being tutored together or watching movies together that she begins to warm to him. By the end of the book, he comes to care about others, bargaining with Kendra to get Will (his tutor) his sight back and Magda (his maid) green cards so her children can come to America too. Kyle also puts himself in harm’s way to protect Linda. It seems that the Beast can change that quickly that fast, but whether someone can love him is another matter.

I liked how Flinn included many traditional elements from Beauty and the Beast in her retelling, but the reasoning behind the events was better thought out. For example, I liked that a witch cast a spell on Kyle to turn him into a Beast, like the original, but there was a plausible reason for why she casts the spell. In the Disney version, the Prince is turned into a Beast because he refuses to give an old beggar woman shelter from the storm. The old beggar woman transforms into a beautiful witch and places a curse on the Prince so he can learn to see past looks. Considering the Prince was a child at the time, it seems harsh to turn him into a Beast as a punishment. In Beastly, however, Kyle should know better at his age, and he is so vile that he really does deserve to become beastly so he can understand what it feels like to be judged by his looks.

I thought that Flinn’s decision to change the reason for Linda moving in with Kyle was a good one. In most retellings, the Beast essentially kidnaps Belle by demanding that Belle’s father bring Belle to him in exchange for his life. In Beastly, Linda’s father offers Linda in exchange for his life when he is caught breaking into Kyle’s greenhouse. This is much better in my eyes because I always found that aspect of the story made me feel uncomfortable. I also think this is plausible because Linda’s father is a criminal and he later sells her to another criminal when she returns to him (so not out of the ordinary for her father). Also, Kyle is somewhat protecting Linda from her father in a weird way. I did and did not like how Lindy reacted to being sent to live with Kyle though. While I thought that her negative reaction towards Kyle was realistic because she is essentially a prisoner, when you consider how bad her father treats her throughout the book,  I think it would have been good for Flinn to show that Lindy sees she is better off away from her father.

I like the inclusion of the magic mirror and how this is an important part of Kyle’s transformation (i.e., he watches Linda through the mirror and comes to care about someone other than himself). Although, I do find it a little stalkerish and disturbing that Kyle watches Linda so much in the mirror before she comes to live with him.

Another plot point from Beauty and the Beast that was included in Beastly, was Linda’s departure from Kyle when she sees her father is sick in the magic mirror. The fact that Belle doesn’t return because her father wouldn’t give her the address and then because her father sold her to another criminal. This was interesting and I like that Linda couldn’t return rather than didn’t want to return. I like that Kyle risks everything to rescue Linda, despite the fact that he has to go to the subway to rescue her, which is crowded with people. While this was a modern interpretation, I do think it was a little over-the-top. The criminal tries to rape Linda at the subway, and he threatens Linda and Kyle with a weapon. I’m not sure how realistic this was.

The only problem with including so many of the original plot points is that there wasn’t anything unexpected in the book. I guess that’s part of the downfall of reading retellings, but I wish Flinn had added a twist somewhere, or something completely new. However, I do think that the inclusion of Kyle chatting to other people, who have been transfigured as well, was a stroke of genius. It’s a really clever piece of writing as Flinn subtly brings in several other fairy tale characters, including the Frog from The Frog Prince, the Little Mermaid and the Bear in Snow White and the Red Rose. These scenes were wittily written and cleverly hinted at aspects from the respective fairy tales.

I really liked the blind tutor that is hired to teach Kyle. He was rather comedic and had me laughing out loud a few times, even when I was on a public train :S

Finally, I would like to comment on the romance in the book. I’m not a fan of cheesy, soppy romances. For the most part, the romance aspect was fine, although there were points where it got a little weird for me. People who like books with romance will really enjoy this though.

Final Verdict: I would recommend you read the book rather than watch the movie. If you’re a fan of fairy tale retellings, I think you’ll really like this book.

In my last year at university, I went through a phase of reading as many different versions of Beauty and the Beast and watching as many film versions as I could get my hands on. One of the surprising things was that there were no real modern adaptations of the story; the only one that I found was Beastly. I was impressed with how it handled to story and kept in many of the classic elements.

As Frances mentioned, there is a lot that is gained by finally seeing the story from Beast’s point of view. But I also liked that we were allowed to glimpse a bit more of his behavior before the change, and really why he deserved what happened. One of the most striking elements was the change in him before he was loved. We see him slowly learn that he cannot use his looks or his father’s money to fix things, and then he realizes that there is more to life than looks. He did not have a great home life, and we see him create a family around himself, and learn to love himself finally. It is not always an easy transition, with some bumps and regressions along the way, but he learns. I think this element is missing from many retellings, it is important to see why Belle could fall for the Beast, and to see the Beast’s redeeming qualities.

One of the elements of the original tale that I have always had trouble with is Beast holding Belle hostage. In this version though, it is slightly lightened by the fact that Kyle strikes the deal with her father, not only for himself, but also to make things better for her. While he is still essentially kidnapping her, it is more on par with social workers, rather than random men with ski masks. It was a much more believable scenario in a modern setting, just as the age of the characters were adapted for the story.

Overall, it was a great and fast read. A good book for teens with romance and magic, but also the traditional elements are still hidden in there. I would recommend this to people looking for a nice light read that can just be enjoyed with no thinking involved.