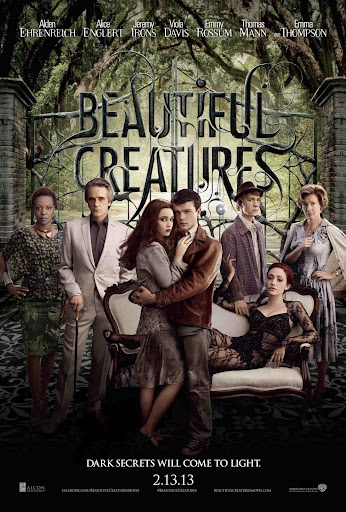 “You think you can keep Lena so good, so innocent? Wasn’t I the same before I was Claimed? And look what I am now.”
Ridley, Beautiful Creatures

After reading the book, Beautiful Creatures by Kami Garcia and Margaret Stohl, I had mixed feelings about the upcoming movie adaptation. There were two themes that the movie could focus on; romance or magic. The movie trailer didn’t really give me any indication about which one the director had chosen. There was a nice display of magic throughout the trailer, but there were a fair few cheesy romance clips, too. When I arrived at Cineworld and read their movie magazine, they recommended Beautiful Creatures to viewers who liked Twilight and Red Riding Hood. That made me very wary as I am not a fan of either movie.

Here we go: The movie starts with Ethan waking up after a reoccurring dream of a girl whose face he cannot see, and him dying. He dreams of leaving the small town of Gatlin, and says that only those who are too stupid or too stuck stay in Gatlin. At school, the new girl Lena makes a stir as she is connected with the town recluse (whose family is said to be Satanist), and Ethan’s ex-girlfriend is the leader of the pack against Lena. On the way home, Ethan almost hits Lena, and then gives her a lift back to her house, and while he tries to get to know her better, she tries to keep him at arm’s length (or further) away. After Lena unwittingly breaks all the windows in a classroom after being bullied, Ethan is given a hint that there may be more to the rumors. But instead of backing off he uses his charm and finally breaks through Lena’s walls. When he tries to give Lena a locket he found on a run, both Lena and Ethan share a vision of the past. As more strange things happen Lena confesses to Ethan that she and her family are castors and that on her 16th birthday Lena will be claimed by either the light or the dark. If it is the dark, she may no longer be the Lena that Ethan is coming to love. To make matters worse Lena’s uncle, Macon, and several others try to break apart the couple, and suddenly Lena’s dark caster cousin arrives in Gatlin. Unbeknownst to Lena, her dead mother’s spirit is back, and she is a dark caster who is certain her daughter will be, too. What will happen on Lena’s 16th birthday? Will she and Ethan be able to stay together? And what is this curse that her cousin mentions, one that means she will be claimed by the dark no matter what she does.

The amount of magic in Beautiful Creatures did not meet my expectations, unfortunately. While the magic scenes that featured in the movie were excellent, there was a fair amount missing. The magic scenes that occur in Beautiful Creatures are well directed and filmed. A few scenes in particular stand out. The first is a scene that occurs early in the movie, where Macon asks Ethan to tell him his future plans. Ethan begins to tell Macon that he intends to move to a college far from Gatlin, but Macon has cast a spell to find out Ethan’s true future. Ethan begins to spew information about his life, and it’s not pretty and the opposite to what he intended. The acting by Ethan in this scene was outstanding. He managed to convey the inability to control what he was saying, and despite his calm and matter-of-fact tone, it is clear how fearful and confused he feels. You can see the scene below:

The second is a scene that features in the trailer, where Ridley brings Ethan to dinner at Macon’s house. Ridley has been claimed for the dark and is not welcomed by her family. An argument begins between Ridley and Lena, which culminates in a magic battle. The visual effects are entrancing; the table spins around, and Ridley and Lena spin the opposite direction around the outside of the table, arguing the entire time (on IMDB it says that this was achieved by having the table spin with the actors sitting on chairs bolted to the floor. The floor around the table span in the opposite direction, and the actors playing Lena and Ridley were strapped to a parade float! In all it took three days to shoot!) The acting ability by both Ridley and Lena is shown in this scene. There is also some comedic moments thrown in, with Larkin (played by Kyle Gallner), Ridley’s brother eating as the battle ensues as though nothing is amiss, and Macon’s exasperation at the nice family dinner being ruined.

While the magic in Beautiful Creatures is well done, I felt that it fell short of my expectations because I’d read the book. I think that there are a few magical elements in the book that really should have made it into the movie. For a start, Ethan and Lena have the same dreams about each other, and these dreams are clues as to what happens at the end of the book. Plus, Ethan often wakes up drenched in water because it’s rained in the dream, or smothered in mud. These were nice additions to the book. While the dreams are mentioned in the movies, they aren’t really explained and so they become rather lost.  I also think that Macon’s character falls a little flat in the movie. While he does seem powerful, there is so much more to him than just being a caster, hence why he is able to suppress his dark side in order to help Lena. This is kind of ignored in the movie, and Macon is portrayed as a castor who can choose to be light or dark because he is a male. In the book, all of the castors in Lena’s family are claimed for the light or the dark, not just the women. I didn’t like the fact that the movie twisted it so that only women were claimed for the light or dark. There is a reason why Macon is able to choose, and I think it would have been nice to see that in the movie.

I think the part of the movie that was a letdown for me was the ending. Again, I think this is because I have read the book. The ending of the book and the movie are entirely different. In the movie, Lena faces Sarafine and Ridley alone. In the book, Ethan is a pivotal part of how the curse is broken. Plus there are much graver consequences of Lena becoming light or dark in the book. In the movie, it seems as though a large fuss is being made because Lena just doesn’t want to become a powerful dark caster because she might hurt a lot of people. There is much more at stake in the book. Considering the build up in the movie, I think the show down between Lena and Sarafine was over all too quickly, especially considering that Sarafine is meant to be the darkest castor of them all. I liked the way that Lena handles the confrontation in the movie, and it is left open to interpretation. Although it is different to the book, I like that part equally. Overall, the ending in the book is better, but the movie is good if you haven’t read the book already. I would recommend both.

While I was initially uncertain whether the focus of the movie would be on the romance or the magic, I was certain that the romance would be badly done and cheesy. It wasn’t my favorite part of the book because it slowed the pace down and at times became a little Twilight-esque. I was completely surprised when the romance between Ethan and Lena was actually humorous and endearing in the movie. I didn’t find myself cringing or rolling my eyes throughout most of the romance scenes. There were a few too many scenes where Lena and Ethan had a sudden make out session, but on the whole it was believable and enjoyable to watch. I think most of the success of the romance comes from the acting ability of Alden Ehrenreich, who played Ethan. He is cheeky and comes out with some of the best original one-liners that I have heard in a while. I have to say that this is the first time in a long time that I have watched a movie and enjoyed the romance side of the plot. I think this is mostly to do with the focus on the banter. The rant Ethan goes on about the ending of Titanic, and why Rose (Kate Winslet) didn’t save Jack (Leonardo DiCaprio) despite saying that she loved him, is particularly funny. See the scene and script below:

Ethan: Can you insult me in the car? It’s getting a little titanic out here.

Lena: If I get in the car will there be more of that fascinating conversation cus I’d rather drown.

Ethan opens the car door. Lena walks around to the other side of the car and pauses.

Lena: I can’t believe you told me the ending to titanic.

Final Verdict: If you like young adult supernatural romances, you’ll like this movie. It stands above the rest at the moment.

I have to say I was really dragging my feet when Frances insisted we go to see this movie. I regretted sharing the trailer with her, and mentioning it was based on a book. I thought there was no way the movie would be interesting, and the thought of sitting through a movie of southern accents was my idea of torture. However, I was flabbergasted to discover that not only did I enjoy the movie, but when it comes out on DVD I will want a copy.

For me the best part was the first half, watching the witty banter between Lena and Ethan. And the two of them against the close-minded, bigoted, and hypocritical town girls (yes, I am a northern girl, and am not always a fan of the south…).  There were a couple of cringe worthy make out scenes that just seemed to go on, but overall it was a lot better than I had expected. Going in I totally expected the two leads to be the ones to hold this movie back, but I was really blown away by the guy who played Ethan, he did a great job.

I liked the idea of the magic that the casters had, but I was left with so many questions. The one that really is bothering me about the movie is why are women the only ones who are claimed? They seemed to stress this point, which just made it creepier and pseudo-sexual. I was not a fan of this, and thought it should have just been all casters are claimed. But all that being said, the magic fight over the dinner table was awesome, and Sarafine was pretty brilliant!