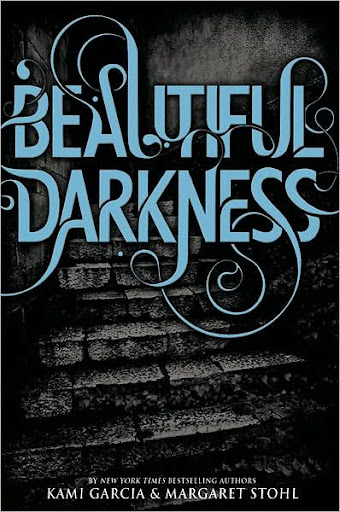 “I was happy for a second. Then I felt like I was falling all the way down. Because she wasn’t thinking about us. She was thinking about her next birthday, the Seventeenth Moon. She was already counting down.
In the center of the heart, she didn’t write out names.
She wrote a number.”
Ethan Wate in Beautiful Darkness by Kami Garcia & Margaret Stohl

I’m not going to lie; I found it hard to work up the motivation to read this book. I had enjoyed the first one, Beautiful Creatures, more than I expected, but I didn’t have faith that the story was going somewhere new. When it arrived from the library, it took me almost 3 weeks to make it 35 pages, but then I sat down and forced myself to read, and finished the rest in two days. I have to admit that again Garcia and Stohl surprised me, and despite myself, I enjoyed most of it.

From this point on I will be discussing some of the plot points of Beautiful Darkness, and there is no way to do this without spoiling the end of Beautiful Creatures, so if you have not read or seen it and you don’t want spoilers, please stop reading.

The story picks up right at Macon’s funeral, and Lena is not dealing very well with losing her guardian, or the fact that she has to decide the fate of her family on her Seventeenth Moon. Ethan tries his best to give her space, or comfort, but he cannot seem to do anything right. Before long, Lena is pulling away from Ethan and hanging out with people she probably shouldn’t. Ethan, with the help of some friends, both new and old, must decipher the clues left by his mother; clues that may be able to mend the rift that has come between him and Lena. Can he save her and the world?

I have to start with the fact that the first 100 pages were painful for me to get through, and I almost didn’t finish the book. I realized after talking with Frances about the previous book that I actually don’t really like Lena, and found her annoying in the last book. This book, the traits in Lena that I disliked are taken to an extreme, and it made the scenes with her rough. Understandably she is depressed about losing Macon and the choice she still has to make, and I know she was never really that great with her feelings, but she is unbearable. Even stranger is that her family seems oblivious or unconcerned with her behavior, only Ethan seems to be trying to help her, but she has mixed feelings about him due to the events of Macon’s death. While I do feel for her, that does not make her a good lead, and I think she is cruel to Ethan, who seems to work much harder at their relationship. For me, the book really picks up when Lena goes off, and is no longer physically present in the book (so somewhere after page 100).

While there is not as much magic as in the previous book, I feel that the magic we do see is more impressive. We get to meet some different types of casters, and other supernatural creatures. Ethan also discovers how deeply his mother was connected to the caster world, and how connected Gatlin is to the supernatural. Also, Marian proposes a theory as to why Ethan, as a mere mortal, is able to do some of the strange things that he can.

There was a lot that I did like about the book, and found very interesting to read about. I loved the mystery surrounding Macon and the new visions Ethan stumbles upon. This part of the story I had been expecting in the previous book because of the Beautiful Creatures movie, but was glad to see it existed somewhere in the series. The visions about Abraham (Macon’s great something grandfather), were exciting, but Ethan and Lena were very slow to make the connections.

There were a couple new characters in this book, Liv and John Breed. I would love to actually hang out with Liv, the English girl that is Marian’s new assistant. She provided some actually interesting lead female moments, and I have to admit I was hoping she could replace Lena as the main female! The other new character, John, is purposefully an enigma, but I just never connected to him; partly because he is so linked with Lena, but also because he was just sort of bland. The main thing we know about him is that he is a supernatural unlike anyone else, and is friends with Ridley. However, with some revelations at the end of the book I have a feeling he could be more interesting as we learn more about his past and purpose. My absolute favorite new character is one that only pops in at the end for a little bit, but it is so worth it. I don’t want to give too much away, but I will leave you with this quote from her:

“And I’m not a girl. I’m a Succubus. When it comes to our kind, the females have the advantage. We are quicker, stronger, and more clever than our male counterparts. Think of me as the praying mantis of the supernatural world.”

There was a feeling at times of an old Scooby Doo mystery, with Ethan and his new gang, Liv and Link. They follow the clues left by Ethan’s mother, never quite sure what they mean or where they will lead. In this part, I loved the tunnels blow the city, and the revelations about some of the towns people we thought we knew! There are some really heartbreaking moments, especially for Ethan, and they were written well.

The buildup to the end was brilliant, with some amazing twists and late additions to the fight. However, to my extreme disappointment, the end sort of just fizzles out after the main action. It is a bit repetitive with the previous book, and I am not sure how it really differed in the end. That being said, I like how it ends, because I think the next book has to go into a new direction. So I am actually looking forward to seeing Garcia and Stohl break some new ground

Final Verdict: Skim the first 100 pages, then sit back for a good read if you ignore the part of the plot that repeats.