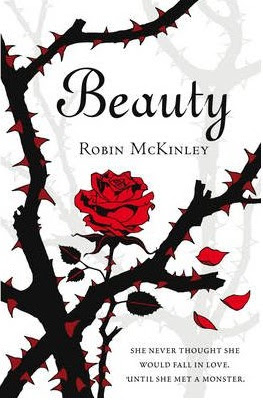 “I said: “He cannot be so bad if he loves roses so much.”
“But he is a Beast,” said Father helplessly.
I saw that he was weakening, and wishing only to comfort him I said, “Cannot a Beast be tamed?”
Beauty, Beauty,Robin McKinley

Robin McKinley’s Beauty is a retelling of the original French fairytale, La Belle et La Bete (Beauty and the Beast) written by Charles Perrault. The story feels as though this is how the fairy tale should have read all along. I recently read the original Beauty and the Beast story, and while it was good, it was short, and did not meet my expectations after reading and watching many retellings of Beauty and the Beast. It is true to the original and has all the key plot points that you would expect from Beauty and the Beast: Beauty’s father loses all his fortune after a merchant ship goes missing and Beauty and her three sisters are forced to relocate from the city to a town in the North. One year later, as Beauty’s father travels back from a business trip to the city, he gets lost and takes shelter in a mysterious castle in the middle of the woods. After taking the night to recuperate, he makes his way home, stopping to pick a rose in the garden. The father is suddenly confronted by a Beast, the owner of the castle, who is poised to kill him. He spares the man’s life in exchange for one of his daughter’s. Beauty insists that she be the one to go, and so Beauty and the Beast meet. Overtime, Beauty comes to enjoy the castle and the Beast’s company. She does return home to her family briefly to solve an urgent problem, despite the Beast telling her he cannot live without her. Will Beauty return before the Beast dies? Will Beauty return at all?

While Beauty is a traditional retelling, there are some additions which bring the story alive. The magic is a much more predominant in this retelling than the original. The castle is filled with magic and Beauty tries to figure out how the blankets tuck her in all by themselves, how Beast uses magic and there are invisible servants in the castle that Beauty sometimes hears talking. These are comical moments that are sure to bring a smile to your face. McKinley also takes the time to give the reader stories about the father and sisters, which mean you end up liking them much more than you do in other retellings, where they are merely selfish characters to dislike. The characters McKinley builds are deep and it’s easier to feel like you know them well, as though they were friends or family.

I do have a few complaints about the book though. I wish that McKinley had spent a little more time on the romance between Beauty and the Beast. The romance is subtle and slow to build, but it does make it a little difficult to invest in the relationship. I think I only invested in it because I’m familiar with Beauty and the Beast and so was already rooting for them. I also wish that the Beast was a bit more animalistic in his mannerisms and temper. When Beauty defends her feelings for the Beast, she says, “Cannot a Beast be tamed,” but there really isn’t much taming involved in the story. The Beast acts nobly and politely throughout. While the Beast does lock Beauty in her room, this is only to protect her because he cannot behave all the time. I just wish we’d gotten more of a glimpse of this side of the Beast.

Final Verdict: If you are a fan of Beauty and the Beast then beg, borrow, or steal a copy of this book to read.