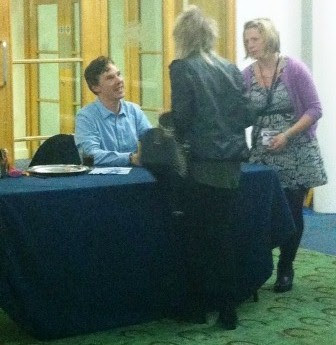 Running in the coat, makes me feel like an action start (mimics running with the coat and flicking his hair out of his face).
Benedict Cumberbatch as remembered by Lynne

As a rule we try to avoid things with lots of children and screaming, fan-girly pre-teens. Unfortunately, we knew that in order to see the amazing Benedict at the festival, we would have to deal with the latter. Luckily that didn’t affect the evening too much. We just had to cope with the uproar from the girls in the audience at every mention of Benedict taking off clothes, or acting without clothes etc…

After rushing from getting JK Rowling’s a signature at the event right before, we made it through the crowd and to our seats. We had picked up copies of The Adventures of Sherlock Holmes for Benedict to sign after the event. While we waited in our seat we planned our strategy for making it through to the line to get Benedict’s signature. Plus, we were seated in the middle of a long row of seats, which would mean disturbing a LOT of people to get out of the auditorium.

When Benedict and Louise Brealey (Molly Hooper from Sherlock) walked onto stage it was to a huge applause. Both were a bit awkward at first, and Benedict made the whole audience stand up and breath with him (we might have abstained from this part). Poor Louise was rather nervous as she had never conducted an interview in front of other people, but she did an excellent job. She was much more entertaining than the interviewer of JK Rowling earlier that day.

They wandered through a range of topics related to Sherlock Holmes. There were many questions about the 3rd season of Sherlock, but very little was known or allowed to be said about this. This meant Benedict said, “No comment,” very often. However, we did learn more about what Benedict liked about filming during the first two seasons, which was pretty much everything, but also the explosion and “boys and their toys.” We also gained a little insight into Molly and Sherlock’s relationship through their interaction on stage. They seemed to be good friends, as they shared inside jokes.

There was also a point made to clear up some of Benedict’s recent statements about the new series, Elementary. He made sure to say that he wished it well, and that he and Johnny Lee Miller are good friends. He believes there is space in the Sherlock Holmes canon for them both, considering they are the 70 something people to play Sherlock.

Unfortunately, there was not that much said about the actual books. More was said about when Benedict read them and what he remembered of them before filming. Both Louise and Benedict mentioned that talking about the actual books would have been better left to Mark Gatiss (Mycroft Holmes in Sherlock) or even Steven Moffat, the writers of Sherlock.

But the interview was funny and engaging. There were just several times where Benedict had to stop in his explanation because of wolf whistles and cat calls. But he handled them well and made the rest of us laugh. Even though this did lead him to lose track of what he was saying and wander off on some tangent, somewhat reminiscent of Sherlock himself. Other than that commonality, we have to say that Sherlock and Benedict are very different.

As with the JK Rowling event, we ducked out a little early to get in line. We weren’t the only ones doing this, and one girl ran from the room! It was rather embarrassing to see actually, and it caught the attention of Louise. She asked where everyone was going, and if there was a train or something. We kept our heads down and walked out of the room at a casual pace.

We were closer to the start of the queue than we had been for the previous event, but actually getting through the line took longer. It was endearing that Benedict had a lot of trouble just signing and moving people through the line quickly. He genuinely wanted to talk to people and let them know he appreciated them being there. However, this meant things moved frustratingly slowly, he was only supposed to sign for an hour. We made it through in about 30 minutes, just when his handlers started speeding him up. He did make a point to apologize to us for having to move people through quickly. It was a bit surprising just how thankful he seemed to his fans and admirers. We were a bit disappointed that Louise was not also available for signing (Lynne was hoping for her signature as well, since Molly was pretty kick butt in the 2nd season).

Walking to the car for the drive back, we must admit that there was some giggling and shock. It had been an amazing day. We had gotten books signed by one of our favorite authors and favorite actors. We will be making sure to book our tickets to next year’s festival as soon as that line-up is announced!

Final Verdict: Great evening out. Push children out of the way (if needed) to attend an interview with either Benedict or Louise.