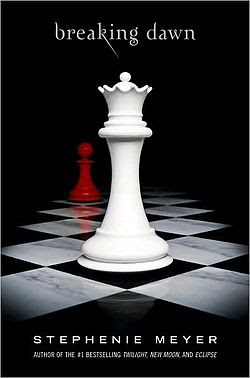 “My life and his were twisted into a single strand. Cut one, and you cut both. If he were gone, I would not be able to live through that. If I were gone, he wouldn’t live through it, either.”
Breaking Dawn, Stephanie Meyer

Breaking Dawn, by Stephanie Meyer, is the final book in the Twilight tetralogyand is twice the size of all the other books. Breaking Dawn continues Bella and Edward’s story from the previous three books in the series. There is a small gap between the end of Eclipse and the start of Breaking Dawn, and other than wedding preparation, not much has happened. The first third of the book documents Bella and Edward’s wedding and their honeymoon to a tropical island. Edward keeps his promise to take Bella’s virginity after they are married, and surprise, surprise, Bella becomes pregnant. This is no ordinary pregnancy either. Within a few days, Bella has a large bump, which would usually take months to grow in a normal pregnancy.

There was far too much of Bella and Edward’s wedding and the honeymoon. I really think this needed to be condensed into one or two chapters. It felt like the author should know all these details, but should have edited the majority out. It was boring, and I just didn’t care! The honeymoon part was not only boring, but also painful. Bella persuades a reluctant Edward to take her virginity, which he does. In the morning, Bella is bruised and the room is in disarray. Edward vows that he will not have sex with her again while she is human because it’s too dangerous. Bella then spends so much time trying to persuade Edwardto have sex again that she is actually begging him. What is that? It is so degrading to read about a woman begging a man for sex. I shudder just recalling it.

After this, the point of view switches to Jacob. Jacob is unhappy about Bella being pregnant but wants to protect her from his pack of werewolves, who want to kill her and the baby. The story reports about Jacob, Seth, and Leah’s patrols, the love triangle between Edward, Jacob, and Bella, and Bella’s rapid deterioration. This culminates in the birth of a Vampire daughter, and Bella’s death.

Nothing eventful happens in this third of the book. It literally focuses on Jacob, Seth, and Leah running patrol and bickering because they don’t really get along. When Jacob isn’t running patrols, he’s inside begging Bella to abort the baby. He and Edward actually agree on this. Bella feels better when Jacob’s around and the love triangle continues. Jesus! She’s married and pregnant and all she wants is Jacob. To me this is just too much love triangle. Meyer should defiantly have chopped this down. All the pining and brooding looks just annoyed me. Although, the werewolves do attack towards the end of this third, Jacob and Edward are inside delivering the baby. Once again, the reader misses all the action! Instead, the reader gets a gross scene where Edward bites into Bella to retrieve the baby. Yuck!

The point of view then returns to Bella, who is now a Vampire. Bella names her daughter Renesmee, who ages and develops much more rapidly than a human child. It isn’t long before Alice has a vision of the Volturi visiting because they have heard news of Renesmee. The problem is that the Volturi think Edward and Bella have turned a child into a Vampire rather than giving birth to one. This is punishable by death. The Cullen family call on all their friends to join them in a stand against the Volturi. Will Bella and Edward find a way to convince the Volutri that Renesmee ages and so isn’t a human turned into a Vampire? Will the Volturi even care? They’ve been looking for an excuse to take out the Cullen family for so long because they pose a threat to the Volturi’s power. You’ll have to read the book to find out, or what the movie. It might be faster and closer to quickly pulling a plaster off

The final third of the book is more interesting. Actually, it’s probably the most interesting bit of the entire series. Why, you ask? Well, the focus is no longer on Bella and Edward being in love, or the love triangle. It’s on the Volutri and preparing for a fight. The Vampires that travel to the Cullen’s house all have different abilities, and these make for an interesting read as they practice. Plus, Bella’s gift is also interesting and I liked reading about it developing.  Of course, these interesting bits are tainted with some annoying aspects. For instance, rather than being a true newborn, Bella is a brilliant Vampire. She’s in control and can instantly resist human blood. WTF! I’m sorry, but that kind of takes the fun out of having Vampires in the story. It also confirms that Meyer really just romanticised Vampires into humans who drink animal blood and aren’t that dangerous, but are faster and stronger. It’s just not interesting.
Final Verdict: If you’ve come this far, you may as well finish. You might want to skim the first two thirds of the book. I can sum them up with: the wedding, the honeymoon and the baby. That’s it.

For other books in the series see Twilight (book one), New Moon (book two), and Eclipse (book three).