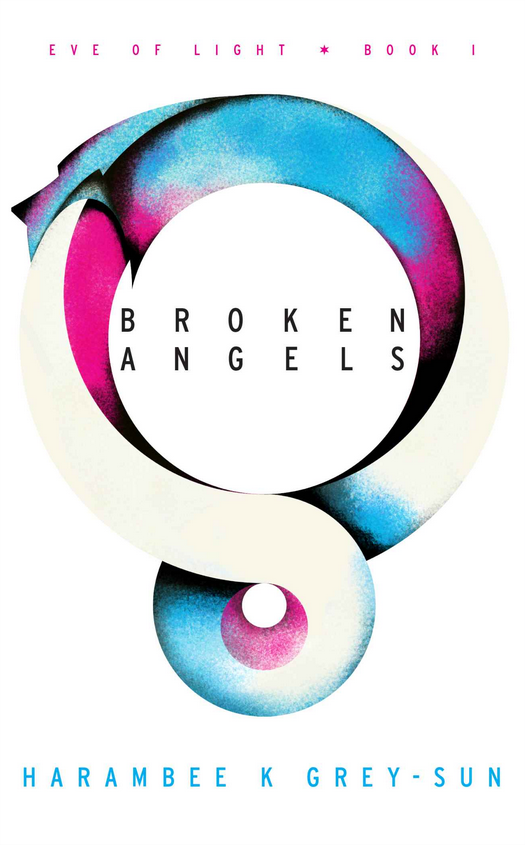 “”I’m not your lover,” Darryl said as the woman’s eyes slowly rose from his chest to meet his. His irises faded from their usual shade of violet and gradually brightened approaching the color of wisteria. “I’m more like an angel”.
His corneas twinkled, and the air around his body filled with suspended particles, looking like not-quite-clear raindrops, each of them smaller than a thumbtack.
The drops multiplied. After an uncertain number of them appeared, they moved, scurrying until gathered into two crescent shapes that hovered just above and behind his shoulders. Before T. could say anything, the crescents unfolded, cascading down and down in waves of intangible watery light. When it was all over, two large, radiant wings featuring various shades of violet extended from Darryl’s back…
…“Like all angels,” he said, “I am essentially a messenger.” He extended his hand to her. “I can give you something better than sex, something that can erase all false notions of love from your pretty-pretty head.””
Darryl, Broken Angels by Harambee K. Grey-Sun

Thanks to NetGalley, I was able to read Broken Angels, a self-published book written by Harambee K. Grey-Sun. Broken Angels is set in a World infected by the White Fire Virus, a sexually transmitted disease that results in an excruciatingly painful death for the majority of people. For a minority of people, however, the effect of the White Fire Virus is much, much slower and, weirdly, enables the person to manipulate light (e.g., become invisible, channel light into a weapon etc.). There are two main protagonists in the book, Robert and Darryl. Both Robert and Darryl are Watcher agents, meaning they locate missing children. Some of the watcher agents call themselves angels, and many people on Earth believe them, hence the title of the book. In Broken Angels, Robert and Darryl are trying to locate a missing teenage girl, who is believed to be mixed up with a gang of virus carriers called the Infinite Definite (ID ~ a reference to Freud’s ID, I assume) who use their abilities to commit acts of terror. Will Robert and Darryl be able to find the missing girl? In the process, they become entangled in a conspiracy to bring about the Apocalypse. Will Robert and Darryl be able to prevent the end of the World?

I will admit that I chose the book based on the title and the description. As a result, I was expecting the book to be about angels, literally. The last line in the description is “Can two dying angels do anything to prevent the Apocalypse?” This isn’t an accurate reflection of the book because there are no angels and the apocalypse isn’t that close to happening in this book. Aside from that, this book has to be one of the strangest things I’ve ever read, but not in a good way.

There is an awful lot of world-building in Broken Angels, which made for a very heavy read. I had expected the author to spend time building up an image of the world given that this is the first book in a series and the world is so very different to ours. However, there was an overwhelming amount of world-building and not all of it was very well explained. The author spent a fair amount of time attempting to explain how the White Fire Virus came about and how it spread. From memory, the White Fire Virus began with flies that infected humans with parasites. The parasites are excited by light which is what causes the medical problems (most often death) and the White Fire Virus is transmitted through sex. I have to say that for the amount of time spent explaining about the White Fire Virus, I don’t understand what happened very well and as this came at the beginning of the book, my attention wasn’t captured. I think that the author may have been better off not explaining like in Warm Bodies by Isaac Marion. I ended up rather skeptical about how realistic the White Fire Virus was—not at a great start!

Next, the author spent an exorbitant amount of time building up a picture of the world several years after the initial outbreak of the White Fire Virus and introducing the reader to Robert and Darryl. Robert and Darryl are both infected with the White Fire Virus and are Watcher agents. Watcher agents track down missing children in the DC area. I don’t understand why missing children are so important in Broken Angels, even Robert (and Darryl, I think) are children who were initially missing and then recruited to be watcher agents. I didn’t really connect with either Robert or Darryl. Robert is a stickler for the rules and he spends a lot of time complaining about Darryl’s “charity work” (I’ll explain in a second). This made Robert’s character rather dull most of the time. There were moments, however, where Robert became interesting. For example, he uses his abilities to help intervene in an abusive event that occurs on a train. He also uses his abilities to fight two members of the ID. Both of those scenes were interesting and fast-paced to read. I liked Darryl less than Robert. Darryl is focused on his “charity work” throughout the book. Essentially, he has read a book called “Death’s Heart” that has led him to conclude all relationships and love causes more pain than no relationships and love. He uses his abilities to brainwash women and men into forgetting about love, pretending to be an angel while he does it. He also has a set routine for attracting women and making them lust after him, then he slams them with his hypnotism to put them off lust and love. He’s utterly deluded by this book that he cannot see that what he’s doing is wrong. He has one brief moment where he begins to see that he might be wrong, but nope, he’s method is just wrong. Sigh!

Ava was the most interesting character. I liked the mystery surrounding what had happened to her since she took down a member of the Infinite Definite and disappeared. From a psychology perspective, I found her unwavering belief that she was an angel fascinating. She’d pretty much been brain-washed into thinking that she’s an angel – by whom, I don’t know. That’s part of the mystery. I particularly enjoyed trying to figure out whether she was good or bad. That ambiguity was what made her character interesting.

Then, there’s XynKroma. I’m not even sure where to start explaining XynKroma! From what I understand, which most likely isn’t correct because the information about XynKroma was very detailed and complicated, XynKroma is a different level of reality. A level of reality which only the soul can travel to and things are really, really strange. It’s kind of like a dream because anything can happen, anything! For example, at one point, Darryl is like this mass of blobbyness without any shape. Another creature kind of molds him into a humanoid shape, but forgets his eyes, ears or mouth—I can’t remember which. Then, I’m pretty sure some other creature eats him and he comes out the other end of the creature as something better and with wings. That might not be perfectly accurate, but it gives you an idea of the kind of madness in Xynkroma. From what I understand people travel to Xynkroma to learn some inner truth but this can have extreme negative consequences for the person. Because of the weirdness of Xynkroma, this was probably the most interesting part of the book to read.

I also really did not enjoy the major philosophical side to this book. It just didn’t make a lot of sense and trying to wrap my head around it was hard going. Here’s what I understand—Creation hasn’t finished. Creation will only be finished when XynKroma leaks into reality as we know it and the two become one. I’m not sure why creating a World where dream-like events are real would be any God’s end-goal, but apparently that’s what God intended. This is the apocalypse that the book description refers to (which is a little melodramatic in and of itself, as humanity wouldn’t be wiped out). The apocalypse also doesn’t happen in this book as the description implies. I assume this occurs in the second or third book in the series.

Final Verdict: Unless you are a philosophy nut, I wouldn’t recommend this book. I won’t be reading the next book.