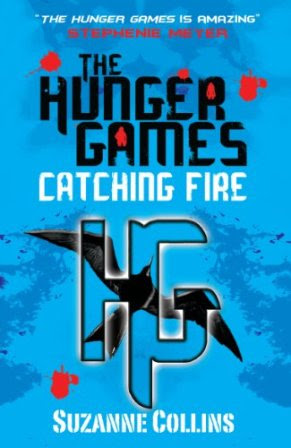 “You know, you could live a thousand lifetimes and not deserve him.”
Haymitch, Catching Fire by Suzanne Collins

When I picked up the first book in The Hunger Games trilogy, I had planned to read book one, and wait a while before reading book two; purely for financial reasons. It didn’t work out that way. As soon as I had finished The Hunger Games, I wanted to read Catching Fire. I downloaded the e-book to my kindle and started reading it straight away. I don’t think it was because The Hunger Games ended on a cliff hanger, in fact, all the main issues were resolved by the end of the book. At the very end, a new threat was introduced, but this is subtle and you could read The Hunger Games as a standalone book without needing a sequel.

Catching Fire continues the story of Katniss Everdeen, picking up almost a year after she and fellow district twelve contestant, Peeta Mellark, ‘won’ (and I use that term loosely) the 74th Hunger Games. Katniss and Peeta are due to go on the Victory Tour where they visit each of the twelve districts before the next Reaping Day begins for the 75th Hunger Games. During the tour, it becomes apparent that their actions at the end of the Hunger Games have had serious repercussions. They learn of an uprising in District Eleven, and that they are the faces of that rebellion! Katniss and Peeta are put under a lot of pressure to act like they are in love in order to explain why they did what they did (cryptic, but I don’t want to give away the ending of The Hunger Games!). If they don’t act convincingly who knows what The Capitol will do to exact revenge on Katniss and Peeta. Plus, they have an extra special 75th Hunger Games planned, which will see some familiar faces return to the Games once more!

Overall, I enjoyed Catching Fire. I didn’t love it as much as The Hunger Games, purely because part of what made The Hunger Games so brilliant was the games themselves. Although, Collins does introduce some interesting twists in the 75th Hunger Games, it just isn’t novel anymore. As a result, I found it a little repetitive at points, like I was rereading The Hunger Games. I kept reading because Collins does introduce some interesting twists and turns in the set-up of the games, but there wasn’t as much violence or desperation. A large portion of the contestants group together, and there are a few too many to keep track of. In The Hunger Games, there were three or four main contestants to keep track of, there is at least double that in Catching Fire. I liked that the group of contestants banded together to defy The Capitol by refusing to kill each other, but it just left the story lacking a little action.

I enjoyed how Collins developed Katniss and Peeta’s relationship in Catching Fire also. The beginning of the book was painful for me because I feel for Peeta’s situation. He loves Katniss unconditionally and he will do anything for her, but she is rather cold and keeps her distance. She is more inclined towards Gale, who kind of rattles my cage. He is so hot headed, and well, the male version of Katniss. I also didn’t like the love triangle. It wasn’t a large plot in Catching Fire, as the focus remains on Katniss and Peeta, but still, I’d rather Katniss have kept her distance from Peeta because she didn’t return his feelings, rather than because she was unsure about Gale. I did like how Collins developed the relationship between Katniss and Peeta as the book progressed. Collins does an excellent job of describing Katniss’ feelings through her actions and showing that she really doesn’t know how she feels. She does slowly become more aware of them, and by the end of the book, I *think* she knows that she loves Peeta.

The best part of Catching Fire is the AMAZING ending. It took me totally by surprise. It marks the beginning of the rebellion against The Capitol with Katniss as the Mockingjay, the symbol of the rebellion. The ending is bittersweet though and the consequences will be huge in the third book in the trilogy, Mockingjay. The cliffhanger was so good that I purchased Mockingjay immediately, as quickly as my fingers could find it on the kindle store and click purchase. Within minutes of reading the ending of Catching Fire, I was beginning the first few lines of Mockingjay.

Final Verdict: A great read but don’t expect it to be as brilliant as The Hunger Games.

For the first and third books in the trilogy, please click the following links: The Hunger Games (book one), Mockingjay (third book).