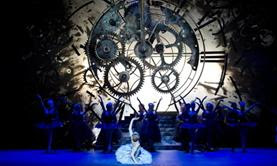 “Oh, well. What’s a royal ball? After all, I suppose it would be frightfully dull, and-and-and boring, and-and completely… Completely wonderful.” Cinderella, Cinderella by Disney

The Birmingham Royal Ballet reprised their staging of Cinderella at the Birmingham Hippodrome in November 2012 (first fun in 2010). The ballet was split into three acts. The first act opened with a beautiful painted backdrop, albeit it was of a gravestone. Cinderella’s father is grieving and the evil stepmother-to-be comforts him. That leaves Cinderella on stage with the two stepsisters. It is clear from the beginning that the stepsisters do not like Cinderella. The curtain rose then to reveal a kitchen scene, and the detail in the scene was really impressive. There was a large fireplace with plates and dishes on the ledge, and a pot hanging over a real fire. A sink and a kitchen table where the stepsisters are sat. One sister is skinny and the other is fat (the dancer was wearing a fat suit, as it is difficult to find a larger ballerina). Cinderella is in rags and waiting on the sisters. The sisters are rather comical, especially the fat one. The audience was laughing within minutes of the performance starting. We were a bit surprised at how physical the fights were between the stepsisters and Cinderella. In most of the versions we have seen, the stepsisters are cunning and brag a lot in front of Cinderella, but the stepsisters in the ballet, threw spoons at Cinderella and put Cinderella’s head into the sink, before throwing her down onto the stage floor! We both noticed right from the beginning how dark the stage was. It was difficult to see some of the detail at times, and we think an extra spot light would have been beneficial.

The fighting is stopped by the stepmother who is holding an invitation to a ball held by the Royal Prince. The stepsisters dance with joy each trying to get hold of the invitation. When Cinderella is left alone in the kitchen she takes out a pair of sparkly shoes that were given to her by her mother. She puts the shoes on and dances in them, dreaming that she could attend the ball, too. The shoes were covered in jewels and really sparkled in the spotlights. The stepmother and the stepsisters catch Cinderella with the shoes. The stepsisters take the shoes from her and evade Cinderella’s attempts to get the shoes back. The stepmother throws the picture of Cinderella’s mother onto the floor, and they all leave. Again, we were surprised at the level of physical fighting in the ballet.

Cinderella is startled to find a beggar woman warming herself by the fire. Cinderella gives the beggar woman some food and the sparkly shoes, as she has no shoes. This just shows how kind hearted Cinderella is. While she has nothing herself, she recognizes that the beggar woman has even less and gives away the shoes she cherishes. The beggar woman sneaks off as the stepmother and stepsisters return to try on dresses for the ball and to practice dancing. This was really comical as the stepsisters were not good dancers. They didn’t point their toes and they put their teacher through a rough time. The teacher’s outfit was red tights and a red cloak, and the few dance moves he did in the cloak were brilliant. On his way off the stage, he did drop the staff he was carrying. Although he tried to cover this up, we are pretty sure this was a mistake.

Act one ends as the stepmother and the stepsisters head off for the ball, leaving Cinderella alone in the kitchen. The beggar woman returns, only she is now a fairy Godmother. The fairy Godmother was wearing a beautiful gown. It was silver with sparkling threads running through it. While she didn’t dance very much due to the dress, it shimmered and shone when she was on the stage. With the help of the four seasons (women who dressed and danced to represent each of the seasons), Cinderella is ready for the ball. The four seasons were an interesting addition, although we did think it was a bit unnecessary. The fairy Godmother and Cinderella could have danced and it would have been just as good. Three of the four seasons danced well (especially winter). She truly looked like she was dancing on ice and her costume was the most impressive. Autumn was rather disappointing though. Lynne commented that it seemed like she really wasn’t interested. Her performance was rather lack-luster. The dancers in animal costumes who fetched items of clothing for Cinderella were a fabulous addition though. There were two lizards, and the way they waddled with their tails sticking out the backs had us giggling often. There was also a frog and two mice (performed by children).

The second act opened at the ball. The ball begins with 6-8 pairs of dancers in tutus, and they are soon joined by four princesses and their dance partners. The dance master organizes the dancers and the ball gets underway. The stepmother and stepsisters arrive and try to dance with the others. They are much less coordinated, however, and get in everyone’s way. Each sister dances a solo piece. The skinny sister tries to woo the dance master, which was fun to watch and again we giggled. The fat sister’s dance was the funniest, though. As she is dancing, a waiter appears with cakes on a stand. The sister gets distracted by the cakes and follows the waiter. The stepmother stops her; only for another waiter for appear. The fat sister dances after the waiter off the stage. There is a crash and a bang, and the sister reappears with a cake in her hand.

The Prince arrives then, wearing a glorious white outfit that made him stand out against the jewel tones of the other ballet dancers. The Prince dances with each princess and each stepsister but is unimpressed. He falls in love with Cinderella the minute she appears and they dance together. We have to say that the Prince’s dancing was impressive. His leaps were so high! He was so graceful and it looked like he was floating (and he was only the understudy!). After watching the Prince and Cinderella dance alone, and then together, we have to say the Prince stood out on his own, but when in the pair, Cinderella took center stage. After many more dances, too many in our opinion because it began to get a little tiresome, the fairy Godmother reappears and warns Cinderella that the magic will soon end. As the clock strikes midnight, Cinderella returns to her rags and her escorts return to animals. She flees the ball leaving behind one of the sparkling shoes.

The final act opens with the dance master standing on top of a pile of shoes, letting over-eager women try to get the shoe to fit. The shoe does not fit any of the women though and the dance master and the shoe start visiting people’s homes. They arrive at the home where Cinderella is and the stepsisters try the shoe on. Both sisters are unable to force the shoe onto their feet. While the fat sister gets the shoe onto her foot, it is clear that it doesn’t fit. The Stepmother tries the shoe on then, hammering her foot into the shoe and trying to convince the dance master it is hers. He shakes his head and the party goes to leave. Cinderella steps forward and tries the shoe on. It fits and she reveals that she also has the other shoe. Cinderella and the Prince dance together, and everyone leaves the stage. Dancers dressed as stars appear and dance together. The Prince and Cinderella return, Cinderella in more Princess-like clothes, and they dance among the stars. The curtain closes, signaling the end of the story. Frances was a little disappointed with the ending. After the buildup, it just didn’t seem enough for the Cinderella and the Prince to dance among the stars. Lynne commented that it was probably a way to show them moving forward in the future without having the try to organize a wedding scene. Frances isn’t sure how the ending could have been better in truth, but it was just missing a bit of magic.

Final Verdict: If you are a fan of fairy tales, this is definitely one to see.