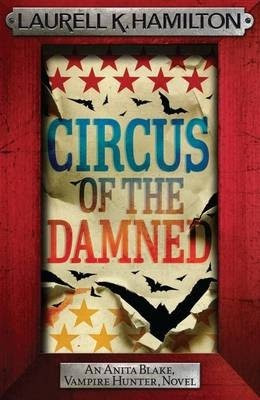 “There was dried chicken blood imbedded under my fingernails. When you raise the dead for a living, you have to spill a little blood” Anita Blake, Circus of the Damned by Laurell K. Hamilton

Circus of the Damned is the third book in the Anita Blake, Vampire Hunter Series. While books one (Guilty Pleasures) and book two (The Laughing Corpse) can be read alone without the reader really needing much idea of what has happened before, book three, Circus of the Damned, brings together plot points that have been building. It’s not one that will really be understood without having read the previous two books. As a result, there will inevitably be some spoilers for the past two books in this review. So, if you haven’t read either of those books, don’t read this review.

At the beginning of Circus of the Damned Anita is called in to consult on a Vampire victim. Anita determines that the victim was killed by numerous Vampires, not just one. As it is unusual for Vampires to hunt together like that, Anita informs the police that a rogue Master Vampire must be leading a pack of Vampires. As a single Vampire bite cannot turn a human into Vampire, Anita gives the okay for the body to be sent to the morgue. When another body turns up, one that was killed a day before the first body Anita inspected, she notices that there is something odd about the body. Will Anita be able to figure out what has happened to these victims before it’s too late?

Yasmeen and Jean-Claude are the least of Anita’s problems in this book. The rogue Master Vampire is hunting Anita. He wants information from her and he will stop at nothing to get it. When Anita receives the first mark of a human servant from the rogue Master Vampire too, an all-out war for control of the city begins. Will Anita live through the battle with two Master Vampires playing tug of war with her?

This book had all of the things that I loved in the first two books of the series (Guilty Pleasures and The Laughing Corpse); Anita was her usual, strong, kick-ass self; Jean-Claude was his usual suave and charming self, and there was lots of violence. That being said, the book fell a little flat for me. I really wanted to like and it and I still do, but there are things in this book that I just don’t like. I think the main problem is that there’s nothing new in this book. It’s more of the same, i.e., a Master Vampire wants to possess Anita. Each time, the Master Vampire gets older and more powerful. The first time, it was believable, but a second time? Plus, there are all the other Master Vampires who are the main antagonist who attack Anita. I’m starting to wonder why all these old Master Vampires are obsessed with Anita. I can see Hamilton’s thought process because Anita has become involved with the Vampire community and she is used as a pawn to get power or leverage. I would just like some variety! Maybe if some other supernatural being was after her: a lycanthrope or a witch or a ghoul. Anything, just not another insanely powerful Vampire!

I do like how everything came together in this book. However, the book built up the plot points from the previous books and intertwined them with everything that happens in this book to get the reader ready for an epic ending…that didn’t quite work. On the one hand, things about the ending were epic; from mental battles between Vampires, werewolves, a lamia, and Anita getting really involved in the fight and showing a real violent streak. On the other hand, the battle was over far too quickly. There was so much going on and it was crammed into such a small amount of words. It made it hard to follow everything that was happening. I really liked the twist at the end of the book though –I won’t mention it here because it would spoil it. Let’s just say that Anita has the last laugh—doesn’t she always!

Like I mentioned earlier, Anita was her usual strong and gung-ho self. There are some scenes in this book that really showed her strength of character and her survival instincts. There is one scene where she is trapped below ground in some caves and is being chased by humans and supernatural beings. The only way out is a very narrow crevice; a crevice that is too narrow for a human to fit through unharmed. I really admired Anita in this scene and others in the book. At the same time, Anita’s “f*** you” attitude did start to grate on me a little. I hate to say it because I think there is a distinct lack of strong female characters in young adult, fantasy fiction. That being said, sometimes this is taken too far and Anita is stubborn for the sake of being stubborn. This usually ends up making things worse and puts her life at risk for something so silly.

Hamilton introduces another love interest for Anita in this book (aside from Jean-Claude and the rest of the Vampires (male and female alike) who seem to want her. The difference is that Anita actually likes Richard, although she can’t fathom how he has gotten tied up in the world of Vampires. I like how Anita and Richard’s flirting starts, and I love how Anita doesn’t let it interfere with her job or what’s really important. She has her priorities straight.

Overall, this book fell a little flat for me because there was nothing new. I am going to read the next book in the series, The Lunatic Café, because I am interested to see how the twist at the end of the book impacts Anita. I also hope that some of the new characters will reappear.

For other books in the series see Guilty Pleasures (Book 1), The Laughing Corpse (Book 2), The Lunatic Cafe (Book 4)