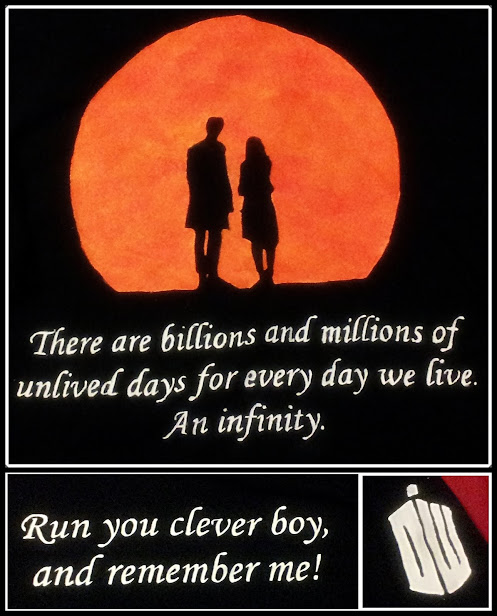 Text on Shirt:
Front: There are billions and millions of unlived days for every day we live. An infinity. (The Doctor and Clara backlit by a star in the The Rings of Akhaten episode)
Sleeve: (Doctor Who symbol)
Back: Run you clever boy, and remember me!

I will be the first to admit that I really like Doctor Who and that I really like the new character of Clara. When I was watching her first real adventure with the Doctor in The Rings of Akhaten, there is a moment when the two are backlit by a star. As soon as I saw that moment I knew I had to turn it into a shirt. Not only would it be easy, to me it was the moment I knew I was looking forward to seeing more of the Doctor’s adventures with this new companion. When in a moment of peril and need, she had stepped forward to save the day, even if it cost her some of her most precious possessions. 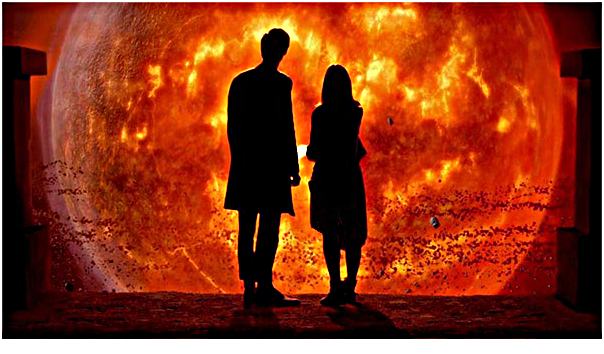 As for the quote it took me a little longer. I wanted something from that episode, but it needed to be correct. So when I watched the episode again to grab a screenshot to turn into the stencil, I listened carefully. There is an amazing moment where Clara steps in to save the Doctor, by holding out a leaf to the star that is devouring the Doctor’s experiences. The leaf was the symbol of how everything needed to be perfect in order for her parents to have met, and when her mother died, the leaf went to Clara to remember her by. She has called it “the most important leaf in human history.” As she is offering the leaf to the star, she speaks the lines from my t-shirt; they are talking about the leaf representing all the different ways things could have turned out. It saves the day because there is an infinite number of ways things could have happened.

To me this quote is a bit complex, but I love it. In my mind, Clara is implying that for every day and for every choice we make, there are places where all the different outcomes exist. So when people you love are taken from you, there is another place where they exist still. Times where things do not happen the way you want them to, somewhere else they do. So maybe somewhere out there is a place where you are the Doctor, or his companion. There are so many futures in front of all of us that we cannot hold onto the woes of the past. Or something like that.

As for the back of the t-shirt, I knew I had to include Clara’s catch phrase. However, I chose the version from The Name of the Doctor. In previous versions, the quote was, “Run you clever boy and remember…” but it is the fact that it is Clara he needs to remember. I don’t usually like mixing things, and would have preferred to stay in one episode, but I felt this all fit together nicely.

As far as the stencil goes this was one of the easier ones to design. I only needed to alter a few things in the picture to make the stencil. However, all the words took a while to cut out. I had also forgotten how difficult the white paint is to work with. It sinks into the fabric really quickly and seeps under the stencils, and it created a lot of difficulties for me on the sleeve. However, I was able to fix things with some work, and some black paint! I was unsure how the star would work, so it was just a big experiment. I created the base color by mixing several paints. Then once that was set I added the highlights and lowlights in yellow and red, and then went over that in a bright orange. You might not be able to see it in the photo, but you can see the different areas in person. As with my last stencil, I recorded the whole process and turned it into a video that you can watch below.

Overall, I am very happy with how this turned out. The star in the front is my favorite picture out of all my stencils. However, the letters and especially the Doctor Who symbol could have been a lot neater, but they are recognizable and legible. I really enjoyed the process of mixing shades with a sponge for the star, and can’t wait to try new techniques with my other stencils. Best part was that I was able to wear the t-shirt to The Doctor Who Proms, and several people complimented it!

Final Verdict: While it might not be recognizable to everyone, I love it!