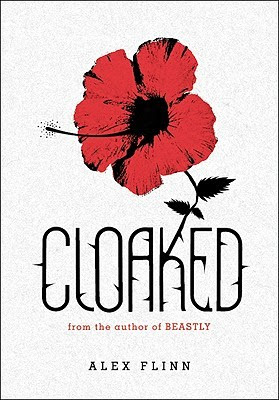 “He bursts into tears, and not some manlike tears either, where you pretend you’re brushing something off your face and, incidentally, wipe a tear. Nope. He starts bawling like a kid who spilled his Slushie…”
Cloaked by Alex Flinn

I picked up Cloaked by Alex Flinn at the library last week. It caught my eye because I enjoy fairy tales and it’s written by the author of Beastly. Cloaked follows the story of Johnny, a shoe maker. He works at a hotel and lucky for him a Princess from Aloria comes to stay. The Princess seeks his help to find the Royal of Prince of Aloria, heir to the throne. There’s one problem, the prince is currently a frog Prince now. Reluctantly, Johnny leaves to search for the frog and ends up battling witches, giants, and even the frog himself, doing a multitude of favours for information, and the odd small time crime along the way. All in exchange for the Princess’ hand in marriage. Will Johnny find the frog? Will he marry the Princess? Will he even survive?

Overall, I enjoyed Cloaked. Flinn weaves together many fairy tales to make one novel in a clever manner. There are some that I know of: The Elves and the Shoe Maker, The Frog Prince, and The Six Swans. There were more that I didn’t know though: The Valiant Tailor, The Salad, The Fisherman and his Wife and The Golden Bird. I also found all the transformed people fascinating. The animals that Johnny meets and tries to extract information from all have interesting stories. Plus, they all want Jonny to do strange things in exchange for information. I enjoyed these side plots more than the hunt for the frog Prince actually. I also found all the magic intriguing. The magic ranges from spelled rings, a magic cloak, and an ear piece that lets you talk to animals, and many more.

The problem was my enjoyment of the book declined as I read it. I started off reading quickly and picking the book up often, but that quickly turned to picking the book up just so I could finish the story. If I’d have put this book down for too long once I passed the halfway point I wouldn’t have picked it up again. The beginning was much more interesting.

The plot also became more and more predictable. I didn’t like that. I’m not talking about the fairy tale parts. I knew that I would be able to predict certain aspects of the story because I am familiar with most of the fairy tales used. I’m talking about the romance in particular, although the predictability crops up elsewhere in the book, too. In places it was painfully obvious and I actually groaned in frustration. These cringe-worthy bits happened more than once and I almost put the book down. This could have been written much more subtly.

Also, I came to dislike the Prince and the Princess as I neared the last third of the book. Johnny kept saying how sweet and honest the Princess was, but I thought she and the Prince were shallow. The Princess comments on Johnny’s looks being average and the Prince comments many, many times on the girl who kisses him. He says things like, “my dear leetle mongoose,” and “my tiny newt,” and “lettle wombat,” I think they need the witch to curse them into a beast until they learn that beauty is on the inside. Johnny is far more of a hero than his friend Ryan, who the Princess takes a fancy to, but Ryan’s better looking. Sigh. This doesn’t teach children anything. In fact, the book almost puts a barrier up between beautiful people and average looking people.

Finally, I found the witch lacked a bit of magic. She was okay, but not the evil witch I was hoping for. She doesn’t really put up enough of a fight and I never once thought she might win. She wasn’t a good evil element in the book.

Final Verdict: If you like fairy tales, I’d read it. It’s a quick read, but be warned you’ll need to grit your teeth and bare it through the predictable bits.