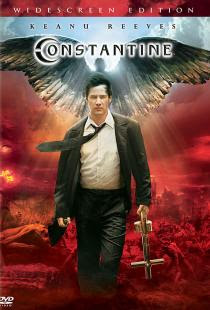 “God’s a kid with an ant farm, lady. He’s not planning anything.”
John Constantine in Constantine

I didn’t realise that Constantine was based on any written work prior to watching the movie. It was only afterwards that I found out Constantine is based on Hellblazer by Vertigo Comics. The movie took plot points from both the Dangerous Habits and Original Sins story arcs, for those who are interested in reading the comics. I will admit that I’m not a fan of reading comics myself, so I haven’t read them.

Constantine tells the story of John Constantine (played by Keanu Reeves). Constantine has always been able to see half-breeds—angels and demons that are part human—whose purpose is to influence humans to be good or evil in an effort to help God or Lucifer  ‘win’ more souls in their war. At the beginning of the movie, Constantine exercises a full-fledged solider demon that is trying to use a young girl as a doorway out of hell. Constantine visits Gabriel (an angel half-breed) and asks Gabriel to prolong his life (he has late stage lung cancer) so he can stop the demons. Gabriel declines, and chides him for trying to buy his way into heaven through a selfish vendetta. Constantine is unsatisfied with the answer and decides to ask Papa Midnite, a retired witch doctor, for help. Papa Midnite also declines as he refuses to upset the balance between good and evil.

In the meantime, Angela asks Constantine to help her find out who killed her twin sister, Isabel. While the evidence suggests Isabel committed suicide, Angela is convinced someone made her do it because Isabel was a devout Catholic. Constantine refuses at first, until Angela is attacked by demons and he realises that Angela is a psychic. Can Constantine unravel the mystery surrounding Isabel’s death, and protect Angela at the same time? Also, will Constantine be able to figure out how full-fledged demons are breaking out of hell and stop it before it’s too late?

Constantine is one of my favourite movies. I’ve watched it so many times that I’ve lost count. Although the movie comes under the horror genre, I don’t think the movie is scary. It’s more of a thriller. In fact, the director has said that Constantine was toned down to fit a PG 13 (12A) rating.

I love the little details in this movie. The things Constantine uses to fight demons are brilliant. He has a key chain of circular symbols and the demons react to certain ones. He also has holy water, gold bullets used in a cross shaped gun, a screech beetle, and loads of other weapons. I also love how Constantine enters and leaves hell; again, it’s all in the details. The need for water, using cats’ eyes as a portal and time slowing down, amongst others, are all brilliant. Then there’s hell itself. It’s exactly as I would picture it—a firey torture pit. I love how Constantine steams when he returns from hell because it’s so hot there.

I also love the time and effort that went into the effects for the demons. The demons look different depending on which type of demon they were. Half-breeds look human, but Constantine can distinguish them by their eyes. Some half-breeds also look more like demons to Constantine. Then there are the full-fledged demons, which are pretty creepy to look at. Lucifer (played by Peter Stormare) is my favourite character in the entire movie. He’s only on-screen for a short time but he’s brilliant. One moment he’s clapping his hands giddily and the next he’s sniffing Constantine like he’s dinner. I love the styling of Lucifer too; a brilliant white suit with black tar dripping from his feet and strange eyes.

Constantine’s attitude throughout is brilliant. He is unusually calm and unemotional for the majority of the movie, but that works well for the character. I find his attitude towards God and Lucifer, and his colourful turns of phrases amusing to watch, especially as Angela is a devout Catholic. I really love Constantine’s general bad attitude. I mean, he finds time to flip the Lucifer the bird! I did like the few scenes where Constantine calm facade disappears. I don’t think it’s because his calm facade is an act as in many books, I think he genuinely didn’t have care about anything at the start of the film. It’s nice because it makes Constantine more believable.

I thought Angela (played by Rachel Weisz) was okay. The psychic part of her character is fascinating, especially when she enters hell for the first time after shutting herself off from her power completely as a child. There are times where she does frustrate me through. She generally doesn’t listen to Constantine and this means she gets herself into serious trouble. I did like that she was a strong woman who felt capable of looking after herself, but we are talking about fighting demons.

This is one of very few movies where the romance doesn’t play a significant role. There is clearly chemistry between Constantine and Angela, but they clearly dislike things about each other. Instead, the focus is on the demon fighting, which I love.

Finally, I’d just like to mention Gabriel (played by Tilda Swinton). Gabriel was made to look incredibly androgynous with short hair and masculine clothes.  The way Swinton acted the character complimented this nicely. I love that Gabriel’s gentle voice contrasted with Gabriel’s ability to lift Constantine off the floor without breaking a sweat. I looked forward to the scenes with Gabriel in, and I wish there had been a few more.

Final Verdict: If you are a fan of movies where the main character kicks some demon butt, check this movie out!