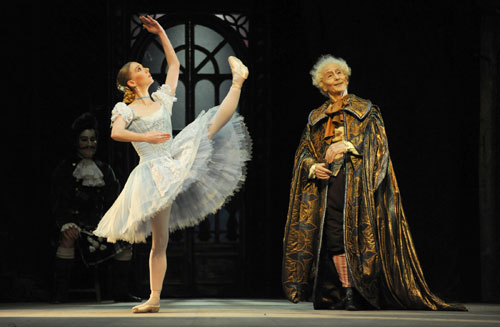 It had been a while since we have been to the ballet, and we were both looking forward to this one. Lynne was especially excited, as she had always wanted to see this ballet (as well as the next one, Giselle). Frances was unfamiliar with the ballet and so was intrigued to see if she would follow it. When looking around the theatre this time though, we were surprised by that lack of children. Usually there are a couple of young dance troupes around, and parents treating their kids to a day out. This time though, it is so close to the end of the year that the few children we saw were too young to be attending school (but we still heard them at least twice during the show). In general the theatre felt emptier than usual.

The story of Coppélia follows the romance of two villagers, Franz and Swanilda. The ballet starts during a festival for the arrival of a new town bell, and it is said that anyone who marries when it arrives will receive some money. Franz and Swanilda have been sweethearts, but Franz has a wandering eye. He is fascinated by Coppélia, the daughter of the magician/inventor Dr. Coppelius. Coppélia, however, only sits on her balcony reading, and only once acknowledges someone when she blows a kiss to Franz. The villagers try to reconcile Franz and Swanilda, and use an old wives tale that if you can hear an ear of wheat rattle, your lover will be true to you. Swanilda doesn’t hear a rattle, but Franz does and convinces Swanilda that she does too, and the two are reconciled. Later that night, Dr. Coppelius leaves his house to go to the pub, and is accosted by some youths and loses his house key. Swanilda and her friends find it and use it to break in and look for Coppélia. At the same time Franz arrives with a ladder to try and talk with Coppélia. Then to end the act, Dr. Coppelius returns home.

The second act starts inside Dr. Coppelius’ house, just as the girls enter. They wander around the doctor’s lab and scare themselves. However, they find that he has many life-sized dolls, and when they find Coppélia, they realize she is another doll and not a real girl at all. However, then the doctor returns and chases all but Swanilda out of the house. Swanilda has hidden behind the curtain where Coppélia is. Just then Franz comes in through the window and the doctor chases him around the workshop. The doctor then pretends to forgive Franz and offers him a drink, but he has slipped a sleeping draft into it. Once asleep, the doctor uses his magic to try and transfer Franz’s life into Coppélia. However, the doll, Coppélia, which he wheels onto stage, is actually Swanilda in Coppélia’s dress. She tricks the doctor into thinking his magic has worked. However, once she wakes Franz up she shows both men their mistakes; Franz that Coppélia was a doll, and Dr. Coppelius that his magic didn’t work.

The third act is the arrival of the bell and the celebration for that. Franz and Swanilda are married as well as another couple. The day is only slightly marred by Dr. Coppelius arriving and demanding compensation as Swanilda has ruined his doll, the Duke (who donated the bell) gives the doctor some money, and Swanilda invites the doctor to celebrate with them all, and he accepts.

Overall, we loved the first two acts, especially the second act, but the third act was boring to sit through. The second act was really all about Swanilda, and the dancer did a great job with that. It was more miming than dancing at parts, but it had the audience laughing throughout. When she is pretending to be Coppélia, she is amazing, and the motions really did make her look like a doll coming to life. Although our favourite part of the act was when Dr. Coppelius caught Franz and had him by the ear and was swatting him on the butt. There was at least one hit that we heard in our seat (and it was not made by just clapping a hand)!

One of the first things to strike us about this ballet was the amazing sets. The opening screen, which had “Coppélia” written on it with a painting of a doll and some curtains, was absolutely stunning. The village was brilliant, with several working balconies and buildings. Dr. Coppelius’s workshop actually felt like the inside of a building. There was even a neat effect when one of the girls lit a lamp on stage the lights actually reflected this change. The scenery really made you feel like you were there with the characters.

Franz was our favourite dancer throughout. He was really amazing at his leaps and twirls, and his choreography really let him shine. The only trouble was some lifts in that final act were a little shaky and slow at times. In contrast, Dr. Coppelius was never really allowed to dance, but the dancer did a great job providing humour with his few movements.

The costumes were amazing throughout. Swanilda and the other women’s dresses in the first two acts were awesome. The gauzy skirts just floated in the air, and made the dancing amazing. The townspeople had costumes that reflected the Eastern European influences of the ballet and this provided some wonderful stomping dances as they all wore boots. The one thing we loved in the third act was the dresses on the women’s first dance. The dresses were mostly white and gauzy, but the bottom was subtly tinted pink, and overlaid with gorgeous embroidery.

The trouble with the third act was that it was slow, with no real addition to the story, except to tie up the loose ends. Instead it was a lot of dances that were supposed to represent the different purposes of the bell. Not only were these unclear, several were boring. It was so slow that Francs actually started to drift off several times, much to Lynne’s amusement. The music was so quiet that the dancers’ shoes practically drowned it out (and no they were not wearing boots). The first solo female dance was one of the most painful we have had to sit through. It was slow, didn’t flow, and she never actually did anything. It seemed to be more of a flaw of the choreography than lack of skill on the dancers’ parts, which was a shame.

Final Verdict: Great first two acts, that are fun and funny, but you might want to leave before act three.