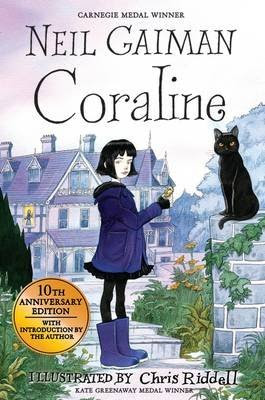 “Because,’ she said, ‘when you’re scared but you still do it anyway, that’s brave.”
Coraline, Coraline by Neil Gaiman

Coraline is a book written for children by Neil Gaiman. The story follows Coraline, a young girl who moves into a flat, which is part of an old mansion in the countryside. Coraline is an only child and her parents don’t pay much attention to her. She is left to entertain herself in the grounds, by visiting the two old actresses and their dogs on the bottom floor flat, or the old man and his mouse circus on the top floor flat. One day Coraline finds a door in the drawing room that opens to a brick wall (it used to lead into the adjoining empty flat). That night she follows a black shape that skitters into the drawing room and finds the door ajar. She opens it to find a passage leading to an alternate World where her other mother and father live. They look exactly like her mother and father, only they have black buttons for eyes. Coraline quickly realizes there is something strange and sinister about her other mother and father, but she is trapped in the alternate World. Will Coraline find her way home, or will she have to stay with her other mother and father forever?

Although Coraline was written as a children’s book, I thoroughly enjoyed it! It’s certainly not just for children in my opinion. It is a very fast read at only 200 pages. It only took me a few days of reading on the one hour train journeys to and from University. It is written simply, yet is engaging. I think this is due to the interesting and sinister plot. It is pretty frightening in places. In particular, the descriptions of the other mother, who gradually becomes less and less like Coraline’s mother, send chills down my spine. The drawings in the 10th Anniversary Edition are so magnificent. They bring the characters alive, and are exactly as Gaiman describes them.

I think that my favourite character in the book was actually the cat. He talks in the alternate World, and he is witty and entertaining. For example, when Coraline asks the cat his name, the following conversation occurs:

The cat is wonderfully clever and witty, yet very cat-like in other places. For example, he has a passion for toying with rats before killing them, plus he puts his ears back and raises his hackles. The other mother was a close second. She is deliciously dark and I love how she gradually becomes scarier. For example, her hair becomes wilder, her teeth sharper, her nails sharper and she becomes altogether less human. I’ve included an image from the 10th Anniversary Edition of the other mother. It really creeps me out! 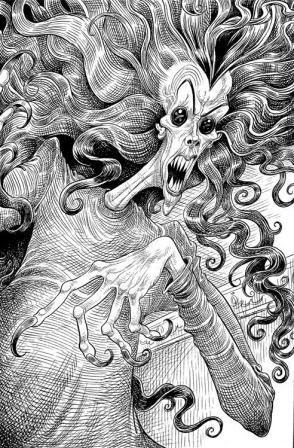