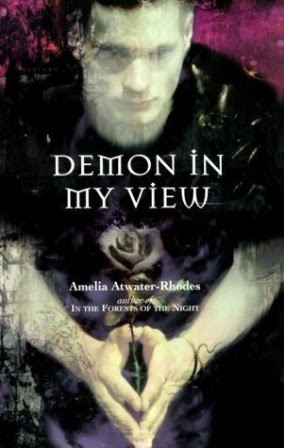 “The night is full of mystery. Even when the moon is brightest, secrets hide everywhere. Then the sun rises and its rays cast so many shadows that the day creates more illusion than all the veiled truth of the night.”
Demon in My View by Amelia Atwater-Rhodes

This book is set sometime after the events of In the Forest of the Night and the main character, Jessica, was mentioned in passing by Risika in the previous book. In this book, we see Jessica as she starts a new school year. But she is unlike any other teenager. She is different, and there is something about her that seems to repel people, she has no friends, and even her adopted mother seems to have almost given up trying to understand her. In response to this, she has developed a sharp and biting sarcastic wit to keep those who try to treat her as a charity case away. But she is also the author of a new book, Tiger, Tiger (pretty much understood to be In the Forest of the Night) but she has used a pseudonym so no one will know it is her. At school she meets two new students that will change her life. One is Caryn, who seems to want to befriend Jessica, but Jessica finds her bothersome, and tries to deter Caryn. The other is Alex, a gorgeous new boy (if you like dark and mysterious), that Jessica realizes looks just like her character Aubrey, a dangerous vampire. Only after running into Alex in strange places, and having Caryn and her mother warn Jessica away from him, does Jessica begin to consider that maybe Alex really is Aubrey. But if that is the case, everything she has written is true, and that would be dangerous to the whole world of vampires. Jessica and Alex/Aubrey start to try to figure out what they feel for each other.  At the same time, the whole vampire world is out for her blood. But Jessica has trouble with the idea that as amazing as the world is for the vampires of her books, she is human, and humans are nothing more than prey.

I think this may be the closest equivalent to Twilight that I have read. There are a lot of similarities, the main one being the slight “Mary Sue” feel to both novels (Mary Sue comes from stories where authors interject themselves into the story as the main character). But Jessica is really strong willed and not willing to be someone who just waits around for a man. The romance and the draw between the characters is similar to the draw between Bella and Edward, but Aubrey and Jessica are much stronger and more dangerous, so you can see the qualities that attract one to the other.

Jessica is a very interesting main character. You identify with her because you see the book mostly from her point of view, but there are some of her traits that are a little abrasive and off putting. She is strong, and cheeky. One of my favorite interactions is when she says without thinking, “Bite me” to Aubrey. He attempts to unsettle her by leaning in and preparing to bite her, but they converse mentally, each teasing the other. Her final comment before he moves away is brilliant: “But if you bite me I’m going to bite back, and do you really want this crowd to see that?” There is another time, where she is fed up of the uncertainty of what is happening, and she needs to get Aubrey to take her seriously, so she slaps him. He has never had a human talk back to him, let alone have the gall to fight back against him. It is her ability to fight his charms, and her reckless nature, that draws Aubrey to Jessica.

It was fun for me to read more about Aubrey. It was nice to see him as something more than a villain. He and Risika have a very dangerous antagonistic relationship in the previous book. In this book, he is the dangerous love interest, and we see that he is not as inhuman as he would like to believe. But it could be hard to call him a “good guy” at the end of the day.

I do love that Atwater-Rhodes keeps the danger in the vampires, even as she makes Aubrey the love interest. Jessica is under no illusion that she is completely safe with him, and she knows the other vampires are out to kill her (or those around her if they cannot get to Jessica). Fala, another of Aubrey’s bloodline, absolutely hates her, but Jessica will not back down, even though it means horrific pain and then death.

My favorite thing with this book is the consequences of choice and the impact of wanting to be a vampire has on being a vampire. In these books, a vampire’s power is based on their strength while they were human, and the trauma they experience when they are transformed. Jessica knows this, and by wanting to be one of the creatures from her book, she knows she cannot be one, as she is unwilling to be a weak vampire. This leaves her and Aubrey in a bit of trouble as there are not many options of what can be done about Jessica, and her novels that are letting the humans see into the vampire world.

The ending of the book is rather awesome. I really love that all the characters are true to themselves, and what they believe. I think this is very true for Jessica, Fala, and also Caryn (a character that it might be tempting to overlook until the end). I wish that Atwater-Rhodes would have continued with these vampires, or at least this line of vampires. I found the next few books a bit disappointing because of the weakness in the vampires.

Final Verdict: Take a bite out of this book. An easy, fast read, with strong characters, and the prefect substitution for Twilight.