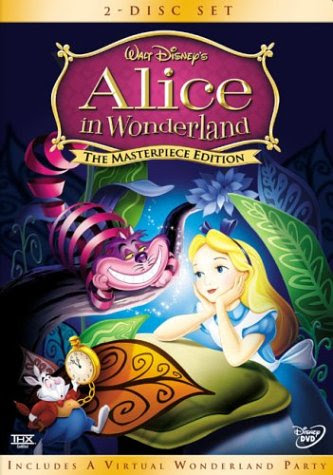 Alice in Wonderland is an adaptation of Lewis Carroll’s Alice’s Adventures in Wonderland. In the movie, Alice is playing with her cat Dinah when she sees a White Rabbit run by while wearing a waistcoat and looking at a pocket watch. She runs after the White Rabbit but the White rabbit is late and won’t stop. Alice follows the White Rabbit into a rabbit hole and falls a long way down into Wonderland. Alice finds herself in a room with numerous locked doors. There is a key for a tiny door but Alice is too big to fit through. A glass bottle labeled “drink me” appears on a glass table. Alice drinks it all and quickly shrinks. Alice can now fit through the door but she’s forgotten the key on the table and she can no longer reach it. After finding cake labelled “eat me” she eats the cake and grows to an enormous size. In frustration she starts to cry. Alice manages to shrink herself again by drinking more of the mysterious liquid but she ends up in the empty bottle. She floats through the keyhole.

After drying off, Alice heads further into Wonderland and the real adventures begin. She meets strange and curious creatures. Alice meets the White Rabbit, who she followed down the rabbit hole because he was wearing a waistcoat and pocket watch; a caterpillar sat on top of a mushroom smoking hookah, who has a desire to know who Alice is even if Alice doesn’t know the answer; a Cheshire Cat, who grins and can appear or disappear at will; the March Hare and the Mad Hatter who don’t make any sense; and the Queen of Hearts who has an obsession with ordering people’s heads to be cut off. It’s not just the creatures that are strange either, it’s Wonderland itself. The location of things change in Wonderland and Alice repeatedly changes height. Nothing makes any sense, not even Alice herself, many of the lessons or songs she recites turn into nonsense. Will Alice make it out of Wonderland? Is Wonderland even real?

You can see the movie trailer below:

This adaptation of Lewis Carroll’s Alice’s Adventures in Wonderland really captures the essence of the book. The movie brings Wonderland and all the characters to life. There are a few additional characters that do not appear in Alice’s Adventures in Wonderland. Instead, these characters are from Through the Looking Glass, the sequel. There’s Tweedledee and Tweedledum, twins who finish each other’s sentences and are really quite peculiar. Then, there’s the Walrus and the Carpenter. I didn’t really like this addition to the movie because it’s quite sad. What the Walrus does really upset me as a child and I still don’t like it now as an adult. Then, there are the talking flowers. I enjoy seeing all of the flowers talk and the song that they sing, All in a Golden Afternoon. The flowers end up being quite mean to Alice though, calling her a weed and chasing her out of the garden.

Some characters from Alice’s Adventures in Wonderland don’t make it into the movie, including the Gryphon and the Mock Turtle, and the Duchess and the pig baby. I didn’t really like these characters in the book so I think taking them out made for a better movie. I also like that the Caucus race didn’t take up much time in the movie. I found these scenes rather dull. The movie had a consistent pace and was more entertaining without these parts.

All of the characters that I loved in the books were well animated in this movie. The Cheshire Cat in particular was brilliant. I loved that he was pink and blue striped and that his stripes disappeared. I thought that Caterpillar scene was quite creepy, creepier than in the book actually. Also, I don’t think his voice was quite right, but I think that’s more to do with how amazing Alan Rickman was at voicing the caterpillar in Tim Burton’s Alice in Wonderland.

The only characters that really didn’t fit what I’d pictured were the Red King and Queen. The King was very short and the Queen was much more butch than I’d envisaged. They also are the only ones who don’t really match the illustrations in Lewis Carroll’s books.

Final Verdict: One of the best adaptations of Alice’s Adventures in Wonderland.