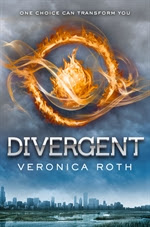 “I feel like someone breathed new air into my lungs. I am not Abnegation. I am not Dauntless. I am Divergent.”
Tris, Divergent by Veronica Roth

Beatrice (Tris) Prior is a sixteen year old girl who lives in the city of Chicago. Chicago isn’t how we imagine Chicago to be, however. The city is split into five factions based on the citizens personality characteristics: Abnegation (the selfless), Amity (the peaceful), Candor (the honest), Dauntless (the brave), and Erudite (the knowledgeable). Tris was born into the Abnegation faction, but when she turns sixteen she is put through a series of aptitude tests that indicate which faction is best suited to her. The problem is that Tris’ test is inconclusive. She shows equal aptitude for Abnegation, Erudite, and Dauntless. She is Divergent. She is warned never to share this information. The faction leaders see Divergent as dangerous and those who are discovered to be divergent are killed. Which faction will Tris choose to devote her life to? Will she be able to hide that she is Divergent from the faction she chooses?

I really enjoyed Divergent. For me, the book is on par with some of my favourites in the dystopian genre including The Hunger Games, The Maze Runner, and Red Rising. The different factions in Divergent are what form the foundation of the dystopian theme. The people who live in the city of Chicago are split into factions based on their personality (e.g., whether they are selfless, peaceful, honest, brave, or knowledgeable). I liked learning about the different factions. They each dressed differently and had little quirks that set them apart from each other. For example, Abnegation wear grey simply clothes and are quiet and reserved. Dauntless, however, wear black clothes and have lots of tattoos and piercings, and they are generally loud and outgoing. I always worry with books that contain jargon (e.g., the names of the factions) that things will become confusing and the reader will get lost in the jargon. However, you could tell which faction the characters were from just by how they looked or acted which meant I wasn’t left scratching my head wondering which faction they were from. The fact that it was easy to picture what each faction would look and act like meant that it easy to emerge yourself into the world. I will admit that you do have to suspend belief a little to believe that these factions could develop in the first place. It just seems odd that Erudite (the knowledgeable) is a separate faction. Surely being knowledgeable is part of the other factions too. For example, the Candor faction produces the lawyers and judges because they can’t lie which seems logical, but are they not also knowledgeable and therefore Divergent? Additionally, the Amnity faction produces the doctors which seems logical, but are they not also knowledgeable and therefore Divergent?

At the beginning of the book, Tris takes an aptitude test that is supposed to identify which faction is best suited to her personality. The aptitude test itself was brilliant. Tris is essentially hooked up to a computer and enters a simulation. She is presented with a series of situations and her decisions rule out each faction until there is only one left. The problem is that Tris shows an aptitude for three of the five factions: Abnegation, Erudite, and Dauntless. Her examiner tells her that she is what’s known as Divergent, meaning she shows equal aptitude for more than one faction. She is warned that she shouldn’t tell anyone that she is Divergent else the faction leaders will have her killed. I liked the idea that Tris is Divergent and I thought that Roth did a good job of showing her aptitude for each of these factions throughout the book. There are moments where she acts very brave, moments where she acts very selfless, and moments where she acts very smart. I did think that the fact Tris is Divergent would be a bigger part of the book though, considering the title is Divergent. The biggest part of the book is actually devoted to Tris’ time working through the initiation into Dauntless (the faction she chosen on the Ceremony Day). Although the trials and tests that she is put through are fast-paced, violent, and keep you gripped to the story line, I do wish there was more about the fact that she is Divergent. There is an undercurrent of threat that if anyone finds out she is Divergent she will be killed, and there are a few moments where she acts in a way that could make people suspicious, but it really isn’t until the last 100 pages where the fact that Tris is Divergent becomes important.

Talking of the last 100 pages, I was a little disappointed with the build-up to the events that happen in the last 100 pages. There seemed to be an awful lot of violence and the explanation for the violence wasn’t that sound. There needed to be a slower build up, with greater unrest. There was just a few newspaper stories here or there to create tension between the factions which suddenly when from simmering anger around 2-3 to a murderous rage at 10. I think there was perhaps a little too much time on the initiation tests that Tris goes through and not enough on the real action in the book. In The Hunger Games trilogy, the unrest in the districts grew over the course of two books which built up a great deal of tension. Plus the reasoning for the unrest in the districts was really clear so when the districts revolt, it made sense. Even the violence of the capitol makes sense because they want to retain power at all costs. The reason for the unrest in Divergent didn’t justify the amount of anger and violence that occurred, for me.

I really liked Tris but I’m not sure that everyone will like her. She’s not your average YA fantasy lead. Tris is hot-tempered, sarcastic, and an adrenalin junkie. She has a fierce self-preservation instinct and she enjoys being a member of the Dauntless, violence and all. What I like about Tris is that she isn’t afraid to admit that she doesn’t feel guilty when someone gets beaten to a pulp if they deserved it or when someone commits suicide after they’ve tried to help kill her. She enjoys winning and she enjoys the numerous fights and trials (physical, emotional, and mental) that she has to go through to be Dauntless. These scenes were some of my favourite parts, particularly the simulations where she has to face her fears. She does have her limits of course. She’s not a crazed psychopath. There are moments where she is brave but in a selfless way though. For example, she takes the place of a fellow Dauntless initiation member and has knives thrown at her head and she puts Four’s life above her own when she has to make a hard decision. Although some people might see her as cold and self-centred on the whole, I think that she’s different and she reads like a real person. Who wouldn’t be glad that someone was beaten up if they tried to kill you? The most interesting aspect of Tris’ character though is watching her accept who she is rather than trying to hide it so she can fit in to one of the predetermined factions. I thought that was a good message for a YA book.

My only complaint about Tris is her complaints about her appearance. Particularly that she is child-like. I was uncomfortable each time she talked about her body as being child-like. I’m not sure why this was part of her character. It just didn’t seem to fit. I found this particularly awkward when the romance between Tris and Four begins. I felt the chemistry between Tris and Four from early on, but Tris’ references to her child-like appearance undermined some of the scenes with the two of them together, especially because he’s two years older than her. As I said, I liked the romance between Tris and Four. It was sweet and cute. I wouldn’t say that I was dying for them to be together and there were moments where things got a little sickly. However, they treated each other like equals and respected each other. A healthy relationship is pretty rare in YA books. There’s usually a love triangle (boring!) or stalker like behaviour (ahem…Edward in Twilight).

I thought that Four was a realistic male character. There are many YA books where the male character is too feminine or too masculine. Four felt like a real person. He is tough and not that sympathetic towards others, but he’s also funny and underneath his steely exterior there’s a vulnerability. I enjoyed getting to know Four. I particularly enjoyed the part where Tris and Four entered his fear landscape and we learn why Four is called Four and what his real name is. I think Four has to be one of the best male characters that I’ve read in a while.

As far as the antagonists go, I wasn’t really impressed. Eric is an obvious antagonist, but he didn’t really do anything to make his character memorable. There were a few moments in the first half of the book where I thought his character would take a more central role, but he didn’t. Then there are a few people who are also going through the initiation process too that pick on Tris. These were good antagonists during the trials and tests, but they never really stepped into the limelight. At least they were more memorable than Eric though. Finally, there’s the person orchestrating everything. I feel ambivalent about this person. They weren’t really present in the story enough to develop into a strong antagonist. To be honest, all of the antagonists felt a little one dimensional and didn’t really reach their full potential.

Last, but not least, some of you may be aware that Divergent is being adapted into a movie which will be released in 2014. You can see the trailer below. I’m unsure of the trailer, to be honest. My main concern is the clear age difference between the book and the movie. In the book, Tris is sixteen and Four is eighteen. In the trailer though, Tris looks older than sixteen and Four looks way older than eighteen! I looked up their actual ages on iMDB. Shailene Woodley who will play Tris was born in ’91 (22 years old). She has a young looking face though, so I think she could pass for eighteen. Theo James who will play Four however, was born in ’84 (29 years old) and I don’t think he can pass twenty! I’m worried that this might make Tris and Four’s relationship really awkward in the movie. What do you think of the trailer?

Final Verdict: If you like a strong-willed female lead that kicks some ass you’ll enjoy this book.