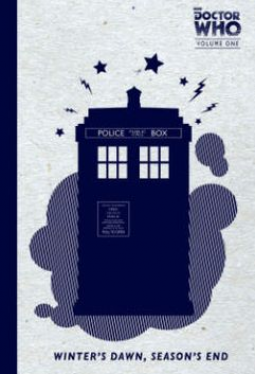 “I reeeeally wouldn’t touch it if I were you. You see, your Nazi mythology got it wrong-along with everything else.”
The Doctor in Doctor Who Series 1: Winter’s Dawn, Season’s End by Tony Lee

Every once in a while I love to read comic books, as they are usually a nice break from 500+ page books. Recently I was in the mood for some comics and was browsing Netgalley. I saw a Doctor Who comic, and I didn’t even stop to read a description before I requested it. It wasn’t until I opened the book that I saw that it was the 11th Doctor with Amy and Rory  (a married couple from modern day England who travel with the Doctor) in the story.

There are two stories within the book, and it is hard to tell if the second follows immediately after the first or happens a bit later. The first story is set mostly in Victorian England, and on Amy and Rory’s anniversary. The Doctor takes them to see the Crystal Palace the night before it first opens, but they have a slight detour on the way. However, it isn’t until the Doctor and his companions arrive at the Crystal Palace for the Great Exhibition, in 1851, that strange things begin to happen. 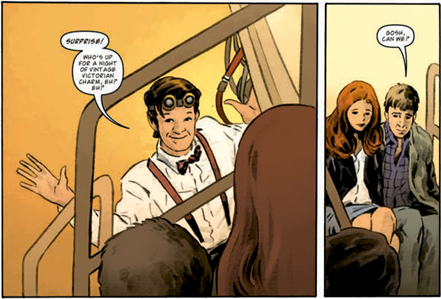 In the second story, Amy decides that the Doctor and Rory have never really had a chance to bond without her around, and this must be why they are not getting along. So she convinces them to spend some time together while she wanders around, but little does she know that the boys try to cheat and skip ahead to the meeting time. However, as sometimes happens with the Tardis, the Doctor and Rory have a little trouble making it back to where they are supposed to be.

The first thing that struck me with these comics is that they are for fans, and not really for people who are unfamiliar with Doctor Who. While it is unnecessary to have seen every episode, some basic understanding of the show and characters is helpful. The second thing that hit me was that I much prefer comics where the artist is free to draw however they want, instead of having to base their drawings on real people. The art was different between the two stories, and I preferred the second, which was more classical cartoon style. The first story was trying for realistic and in the end it was a bit unappealing. Overall, I just found it strange to see well known characters in comic form.

I did like the plot of both stories and the insights into characters I am already familiar with. I thought it was neat that in the first story the Doctor kicks something like in soccer (football to those outside the US), because Matt Smith (the actor portraying this Doctor) originally wanted to be a soccer player before he was injured. However, the first story felt a little too similar to a plot that was used with the 9th Doctor when he and Rose had a Victorian Christmas.

I enjoyed the second story more, just because it was a funnier plot. There were also some great lines from this part. Rory seems to have inspired Ian Fleming to create James Bond, and he is told, “Try not to die for once” which is a great reference to his character being killed frequently in the TV series. However, as the comic ends, you realize that the stories have left us with more questions than they answered.

Final Verdict: A fun short read for the Doctor Who fans, but a bit inaccessible for a casual reader.