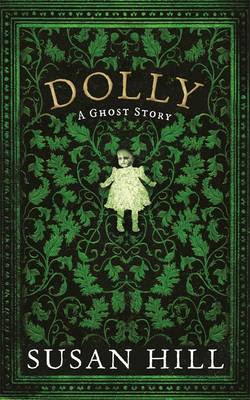 “What he saw on her face when she glanced round was a look so full of malice and evil, so twisted and distorted with dislike and scorn and a sort of laughing hatred, that he wanted to be the one to run, to get away as fast as he could, back to what he now thought of as the safety and shelter of Iyot House.”
Dolly by Susan Hill

I was recently browsing in the local bookstore with my brother when I found a book with a rather intriguing cover. I realized it was a new one from the author of The Woman in Black, Susan Hill. I read the description and thought it sounded like a good story so I wrote down the title to look up later. I was very happy to find that the library had a copy, and I requested it immediately.

The story follows a man called Edward, and his life changing stay at Iyot House with his Aunt. The story starts with a much older Edward returning to Iyot House after the death of his Aunt. He wanders the grounds, only vaguely remembering some of the events almost 40 years before. The story then flashes back to the summer when he was 8 and he stayed at his childless Aunt’s house. She invited his only cousin, Leonora, to stay as well so he would not be alone. The two children are not very similar, and Leonara has a horrible temper. There is one thing she has ever wanted, the one thing her mother has not given her, a very specific dolly. The events of this summer will change the rest of their lives.

The characters were very well done. Edward is a very introspective man and boy. He is easy going, and wants people to just get along. The polar opposite to him is Leonora, and she is terrifying. She is a beautiful, only child, who is used to be spoiled and fawned over. When she doesn’t get her way, she seems to turn into a horrible banshee, with an uncontrollable rage. It is that rage that makes this story terrifying, and ultimately costs the cousins everything.

I had previously read The Woman in Black, after seeing the movie, and liked the book, but did not love it (I actually liked the movie much better). I did like the style that Hill used though, and that is what hooked me immediately with Dolly. Hill has a beautiful and prosaic way of writing. While sometimes the descriptions of things go on for a bit, they are always beautifully written.

The beginning of the story was wonderful, and I found I was halfway through the book in a couple hours. Unfortunately the story fizzles out, and then ends. After I read the last paragraph, I flipped the pages looking for anything more; it just sort of ends, no real conclusion or explanations. I have to say it really ruined things for me. After the first half I was all set to give this a glowing review, but then it just lost its way.

Final Verdict: A fast read, and well written, but ultimately unsatisfying in the end. Take it or leave it.