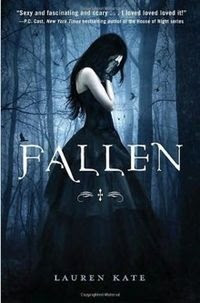 “What if the person you were meant to be with could never be yours?”
Luce, Fallen by Lauren Kate

I have seen Fallen by Lauren Kate many times when I have visited book stores over the past 3-4 years. Each time, the book cover caught my eye and I read the blurb on the back of the book. I always concluded that the blurb sounded boring and appeared to fall solidly in the Twilight kind-of genre, where the main plot is a romance and anything supernatural is a sub-plot at best. Last month, when I visited the library, I caught sight of this book again. I decided that I would give it a whirl, based solely on how great the book cover is.

Fallen tells the story of Lucinda “Luce” Price, a seventeen year old girl who appears to suffer from delusions; she claims to be able to see dark and menacing shadows. As a result, she has been to see therapists and took anti-psychotic drugs for a while. Things take a turn for the worse when she sneaks off with a boy she likes, and he mysteriously dies in a fire. While the Police suspect Luce, there isn’t enough evidence and she is sent to a reform school called Sword and Cross in Savannah, Georgia. While at the school, Luce meets Daniel and Cam, thus creating a love triangle. Luce is instantly and inexplicably drawn to Daniel because she feels certain she has met him before. Daniel is less than friendly to Luce, flipping her off the first time they meet. Luce is persistent though and with the help of Penn, she investigates who Daniel is. Then there is Cam. Cam is very friendly with Luce, and she enjoys the attention she receives from him. He buys her gifts and takes her on two dates; one outside the school gates, which does not end well! All the while, the shadows appear to be getting stronger and more prevalent; they sometimes hurt Luce and then there is the second mysterious fire. Will Luce choose Daniel or Cam? Will Luce figure out who Daniel is? Will Luce survive the menacing shadows that seem to be getting stronger?

I struggled to write the book summary to be honest. There isn’t much that happens outside of the love triangle, so it was hard to write a plot that was longer than a sentence or two. Overall, I did not like Fallen at all. I am surprised because the book scores an average of 4 out of 5 (out of 296 reviews) on Amazon.co.uk. A large number of reviews (114 out of 296) describe the book as “enthralling”, “interesting story”, “intense” and a “thrilling and dark” story. I honestly feel like I read a different book! I think that some of the reviewers for Fallen will agree with me (those who gave the book a 1 (22 out of 296) or 2 (30 out of 296) star. This book was anything but enthralling. I found that the book had a very slow pace, with very few plot points occurring in each chapter to push the story along and it offered nothing new. Everything that happened in the book has been done before in other fantasy fiction, plus the things that did happen were predictable. I wasn’t surprised when anything happened in the book.

The love triangle was the main plot in the story, and I found it frustrating throughout. There was an unbelievable number of cliché’s which left me rolling my eyes or feeling nauseated, plus everything was so melodramatic. For example, “Her heart raced as Daniel stepped toward her, placing both hands on her shoulders. His thumbs fit perfectly along the grooves of her collarbone, and she wanted to close her eyes at the warmth of his touch—but she didn’t. She watched as Daniel bowed his head so his nose was nearly touching hers. She could feel his breath on her face. She could smell a hint of sweetness on his skin…” This kind of writing is continuous throughout the book. Once Luce has met Daniel and Cam her every moment is consumed by them. She weighs up what she likes and dislikes about each one, leans towards one and then the other, and agonizes over what Daniel has said and done. She also continuously seeks out Daniel to the point where he suggests she is stalking him. It really did seem like that, and while Luce does admit it, she continues regardless. It is the amount of obsession and complaining that bothered me. It’s really unhealthy and I don’t think it’s appropriate for young, impressionable readers to admire Luce. Finally, the constant references to Daniel and Cam’s appearance were annoying. I really didn’t need to be constantly reminded how handsome both boys are, in particular the description of Daniel as sculpted (e.g., sculpted shoulders) and or how green and alluring Cam’s green eyes were.

The paranormal aspect of the book played a very small part. I can’t say too much here without giving anything away. Essentially, I was disappointed because it confirmed that this book is essentially just another high school (or in this case reform school) romance where a paranormal element is added but not really explored (just like in Twilight). I understand that this book is a four book series and so book one is essentially establishing the romance and the next three books will explore it. However, considering book one should still be a story in its own right, one that’s interesting, I feel like it completely failed. I’d rather have jumped right in at the end and read the story from there. Also, I doubt the author’s style of writing or the predominant focus on the romance will change enough for me to like the series. I am convinced of this because once Luce discovers what Daniel really is near the end, the book jumps straight into a battle without much explanation. The reader misses what happens during this battle (and this would probably have been the only interesting part of the book had it been included) as Luce and Penn get to safety.

Final Verdict: I would not recommend this book unless you are a fan of Twilight. If however, like me, you really don’t like Twilight, avoid this book because I think it is worse.