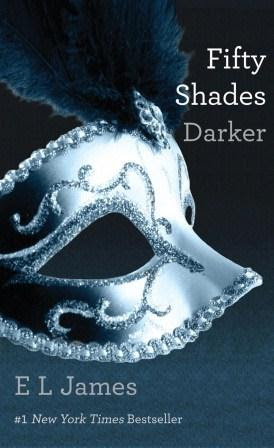 ‘“Don’t leave me,” he whispers.
“Oh, for crying out loud—no! I am not going to go!” I shout and it’s cathartic. There, I’ve said it. I am not leaving.
“Really?” His eyes widen.
“What can I do to make you understand I will not run? What can I say?”
He gazes at me, revealing his fear and anguish again. He swallows. “There is one thing you can do.”
“What?” I snap.
“Marry me,” he whispers.’
Christian Grey, Fifty Shades Darker, E.L. James

Fifty Shades Darker by E.L. James picks up where Fifty Shades of Grey left off. At the end of Fifty Shades of Grey, Ana runs from Christian’s red room of pain, after she asks him to unleash his worst punishment on her. Although she asked for it, the pain is too much for her and the depth of Christian’s need to cause pain upsets her. Ana leaves Christian and when Fifty Shades Darker picks up again, Ana and Christian have spent five days apart. Ana is extremely upset and goes through those five days in a kind of trance, not eating or sleeping and avoiding everyone. Sound familiar? This is very similar to how Bella reacted when Edward left in New Moon (albeit, Ana left Christian in this story). At least this doesn’t go on very long in Fifty Shades of Grey. Basically, Christian contacts Ana and agrees to be “vanilla,” (a term used in the book to refer to a regular, “hearts and flowers” kind of romance) so long as there’s room for some “kinky fuckery” also.

There are annoying things though. Both Christian and Ana are obsessed with worrying that the other person will leave them. They are constantly reassuring each other that they are staying. Reading about a couple with this level of insecurity became more and more excruciating, with them each reaffirming their commitment to each other again and again. I mean, Christian proposes to Ana because he thinks that only when she is his wife, will she truly be his forever. Also, Ana became obsessed with touching Christian on the chest. He doesn’t like this because he was abused as a child, but she takes it personally and continues to persist. I wanted to physically shake Ana at one point and tell her to leave the poor man alone! Also, Ana is fairly inconsistent in her liking for “kinky fuckery.” Throughout book one she seems to like it, and then she leaves Christian when it becomes too much and she thinks he is a sadist. Then, when he agrees to have a vanilla lifestyle without any “kinky fuckery”, she wants it. What?! Give the poor guy a break and stop sending mixed signals already. This constant back and forth got old really quickly.

Everything in between these subplots was pretty much a repeat of Fifty Shades of Grey though. That meant the constant sex became boring very quickly and I actually skim read those scenes. On the whole, the book was more interesting than Fifty Shades of Grey. I don’t think that the subplots (outside of the sex) were strong enough to make this book great. It was okay, but I wouldn’t read it again.

Final Verdict: If you want to read about sex, own it and read the Fifty Shades trilogy. There really isn’t any other reason.

One thought on “Fifty Shades Darker”