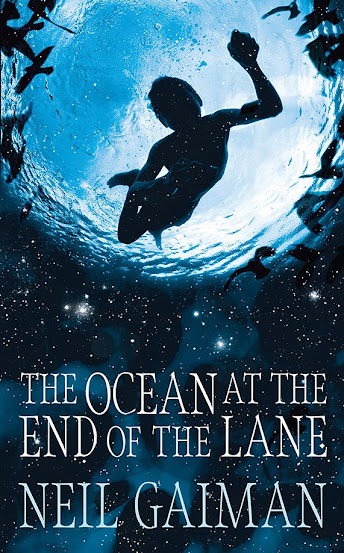 “Adults follow paths. Children explore. Adults are content to walk the same way, hundreds of times, or thousands; perhaps it never occurs to adults to step off the paths, to creep beneath rhododendrons, to find the spaces between fences. I was a child, which meant that I knew a dozen different ways of getting out of our property and into the lane, ways that would not involve walking down our drive.”
The Ocean at the End of the Lane by Neil Gaiman

When Frances visited Bath earlier this year, she stumbled across an advert for the first public event for The Ocean at the End of the Lane by Neil Gaiman. Within seconds, she had booked tickets for the event without checking with Lynne first (it was obvious that the answer would be yes!). The time flew by and suddenly, the event was only a few days away.

We arrived in Bath early, which was good considering that the queue was already forming when we arrived at 5.30pm, two hours before the doors were scheduled to open. We were pretty near the front though so we knew we would get seats near to the front, as it was an open seating event. We took some videos while waiting in the queue; an introduction by Lynne, and a video on Lynne and Frances’ first memories of Gaiman’s work.

We were lucky once the doors opened because we overheard that there were books on sale inside the auditorium. We raced inside and scored two front row seats, almost opposite Gaiman’s chair. The event was brilliant! Gaiman is so charismatic that he had the audience laughing along with him throughout. He has a way with words when he is trying to explain something and his thoughts are always really intelligent, provoking the audience to think.

Rather than go over everything that was said, we actually recorded the event so you can listen to everything he says. The first 30-35 minutes is the interview where Gaiman is asked questions about his new book. We weren’t that impressed with the interviewer and Gaiman really lead the interview. Honestly, he could easily have just sat and chatted to the audience by himself.

The rest of the recording (from 36 minutes onwards) is Gaiman answering the audience’s questions. While, we don’t usually like the questions portion of author events, Gaiman announced that questions should be short and to the point and comments about the individual person should be left until the end of the event. This meant that the questions and answers were actually really interesting and we learned new information about Gaiman’s other books/ TV productions.

You can see the podcast below (broken into two parts). Plus, we also recorded the questions from the audience afterwards. This is the 3rd, 4th and 5th parts on YouTube. If you’d like to listen to these parts, click this link to go directly to YouTube: http://www.youtube.com/watch?v=-Mq1d22fCcU

Alternatively, there are two videos of Gaiman reading excerpts from The Ocean at the End of the Lane if you just want to see him as he reads.

Finally, while waiting in line for Neil Gaiman to sign our copies of The Ocean at the End of the Lane, Frances noticed the image on the side of the book jacket. While signing and personalising Frances’ copy of the book, she asked Gaiman whether it was a family photograph. He laughed and said yes. It was a photograph of him as a child that his sister sent to him after the book had been written. He said that there is a scene in the book where the 7-year old boy climbs down a drain pipe just like that. You can see the photograph below:

Final Verdict: If you are a fan of Neil Gaiman, seeing him live is an absolute must!