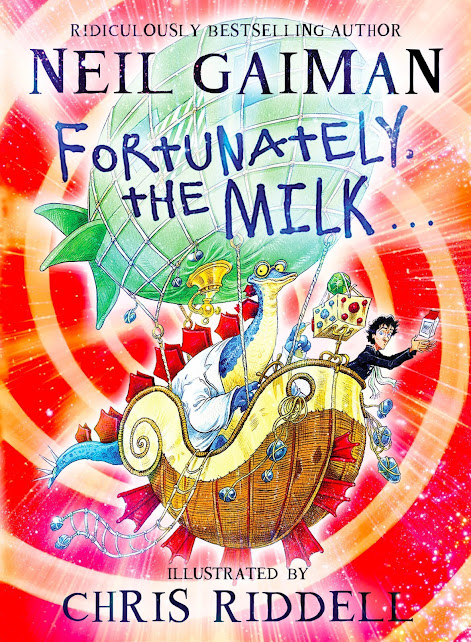 “‘And then something odd happened.’
‘That wasn’t odd?’ I asked.
‘Well, something odder…’”
Fortunately, the Milk by Neil Gaiman

When France and I attended the first book event for The Ocean at the End of the Lane, Neil Gaiman mentioned a children’s book that he had coming out later in the year, Fortunately, the Milk. I loved the sound of the story, so I super excited when Frances texted me to tell me it was on NetGalley. As soon as I was granted access to the story, I read it in one sitting.

The story starts as a dad is taking care of his two kids while the mother is off at a conference, and the dad has forgotten to get milk for breakfast. To the two kids, it seems to take forever for their dad to return with the milk, and when he finally returns they demand to know where he has been. What follows is a fantastical adventure that leaps through time and meets a crazy assortment of characters. In the end, will the children believe their father, or was it all just a crazy story he made up? 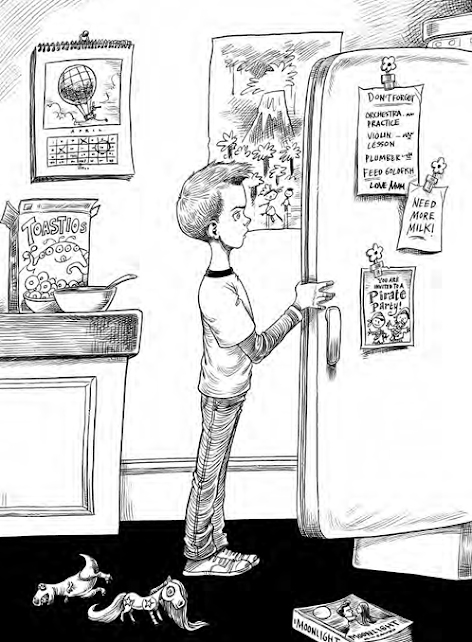 I realized about halfway through the story that I have listened to so many of Neil Gaiman’s books as audio books read by Neil that I could hear his voice in my head. This was helped by the fact that it felt like a Neil Gaiman story, and to me there were connections to some of his other work (such as his work with Doctor Who and The Graveyard Book). The story had everything you would expect from one of his stories; it is fantastical and strange, with some great twists. As with many of the other Neil Gaiman stories I have read, the conversations were wonderful. The quote at the top was one of my favorite exchanges between the Dad and son. There were also some hints of Doctor Who and specifically the episode that Gaiman wrote, The Doctor’s Wife. There is a quote about, “You’ll let the space-time continuum in.” However, my favorite was, “We have spoons. Spoons are excellent. Sort of like forks, only not as stabby.”

One thing that I think was added, because it was a children’s book, was the repeating of the phrase “Fortunately, the milk.” This was included many times, and several different ways. It could have been annoying, but instead I had so much fun looking for all of these throughout the story. I was honestly looking forward to each utterance.

The artwork really brought the story to life, and not only complimented the words but actually improved the story. I loved that it reminded me of many of the books I read when I was younger. There were also some great little touches that made the art so much fun to look at (including some great clues that you won’t realize until later). My favorite part was that the Dad looked just like Neil Gaiman, it really made me believe that this was a story that Neil would have told his own children. Also look for some great cultural references in the art, specifically if you are familiar with The Twilight Series, I won’t give you any more hints than that! 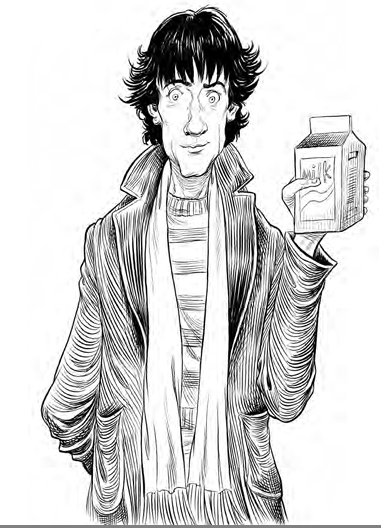 Honestly, I loved this story, and want to own it. I think I may also get a copy for my godson. It is a great story for children or adults who don’t take themselves too seriously!

Final Verdict: A fun story that can be enjoyed by children from 2-92 (or older), and I cannot wait to buy my own copy!