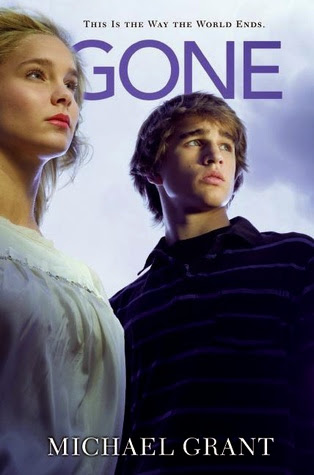 “Sam had a DVD in his hand. He said, ‘Yesterday I sent Edilio to the power plant to get two things. First, a cache of automatic weapons from the guardhouse.’
‘Machine guns?’
‘Yeah. Not just for us to have, but to make sure the other side doesn’t get them.’
‘Now we have an arms race,’ Astrid said.
Her tone seemed to irritate Sam. ‘You want me to leave them for Caine?’
‘I wasn’t criticizing, just… you know. Ninth graders with machine guns; it’s hard to make that a happy story.’
Sam relented. He even grinned. ‘Yeah. The phrase ‘ninth graders with machine guns’ isn’t exactly followed by ‘have a nice day’.’”
Gone by Michael Grant

Gone is the first book in a six-book series. At the beginning of Gone, everyone aged fifteen or over mysteriously disappears. Literally: “One minute the teacher was talking about the Civil War. And the next minute he was gone. There. Gone. No ‘poof.’ No flash of light. No explosion.” If that wasn’t bad enough, Perdido Beach is surrounded by an invisible barrier, and the inhabitants inside the barrier are developing supernatural powers. Animals are mutating into strange creatures, and the teens are developing powers that allow them to do the impossible. Who will take charge when there are no adults? Factions form quickly and suddenly the age of innocence is over. Will the teens be able to put aside their differences and figure out what happened before they disappear on their fifteenth birthdays?

Overall, I enjoyed reading Gone. I particularly think everyone (regardless of gender) will enjoy reading this book. The majority of the book is filled with action which makes the book a page-turner, although there are a few places that are slower. There is quite a lot of violence in Gone, so I think that this book is more suitable for older teens and adults.

While I enjoyed Gone, I think that itdid have some pacing issues. Considering how large the book is, good editing would have alleviated this issue. The opening couple of chapters of Gone are really great. I was hooked immediately. One minute the main character, Sam, is sitting in class and the next his teacher has vanished into thin air. The teens aren’t sure, at first, whether it’s an elaborate practical joke, but when they realize that everyone aged fifteen or over has disappeared, all hell breaks loose. Grant did a great job of highlighting the realistic and awful consequences of all the adults disappearing. Who will take care of the babies/young children stranded in the now empty houses? Who will heal the injured children? How long will the food last? I found it hard to imagine the characters as being 13 or 14 years old. I kept jumping to older teenagers in my head because of the awful things that happen and the grown-up decisions that they have to make.

I lost interest once the novelty of the opening chapters wore off. There just wasn’t enough action between the end of the first few chapters and when the children begin to use their powers. The children begin to use their powers quite some way into the book, although there are hints before that. There was just too much time walking around for a variety of reasons: because Sam wanted to avoid taking the role of ‘leader’ and establishing some order, because Sam and his friends were avoiding the bullies who were taking over in Sam’s absence, or because Sam and Astrid were looking for Pete, Astrid’s younger and autistic brother. There were also quite a few scenes/chapters that were unnecessary, other than to reiterate how terrible things are because there are no adults. For example, the story returned to a boy who was running the McDonalds in order to feed the children, and a girl who was looking after all the babies and toddlers at the day care. I think, perhaps, one scene on each of these early on in the book would have been enough. To return multiple times slowed the plot and these scenes weren’t interesting.

The only reason that I kept reading was because I found Lana’s story really fascinating. She is kind of the second main protagonist. When everyone aged 15 and over disappears, Lana’s grandfather is driving. When he disappears, the car goes over the side of a cliff, and Lana is severely wounded and will die without medical attention. Many of her bones are broken, so she cannot move to find help, and she’s in the middle of nowhere. The buzzards circle overhead, and when a mountain lion appears, she is only saved by her dog who is badly injured by the mountain lion in the process. Lana discovers that she has the power to heal when she lays her hands on her dog and his wounds slowly heal. She sets to work healing herself and then tries to find help. Along the way, Lana runs into several mutated animals, including a talking coyote. I really admired Lana’s spirit and the fact that she didn’t give up. I also really liked the creepy talking coyote. Grant did a good job of making the dialogue sound animalistic and reminding the reader of the gravelly and scratchy voice of the coyote.

I’m glad that I kept reading, and I hope that other people do too, because once Sam acknowledges he is capable of producing scalding light from his hands, and Lana realises she can heal, the plot starts moving forward really quickly. I enjoyed quite a few aspects of the book once the powers appear. For example, I enjoyed learning what powers the other children had, the way Grant referred to the different levels of powers as bars of signal on a mobile was modern and something that children would come up with, and the struggle for power between Sam and Caine, although it took quite a while to actually start. Although, I never liked Caine, Diana, or Drake because they did some really despicable things, I thought they made good antagonists. Each antagonist had something unique about them, whether that was manipulative tendencies (e.g., Diana) or pure psychopathy (e.g., Drake), and that made them interesting individually. I do wish that there had been something redeemable about Caine or Diana though. I think Drake is a lost cause, but Caine and Diana could have been more interesting characters if they weren’t just “bullies”.

Aside from the bullies, some of the other characters were a tad one-dimensional. I didn’t like Quinn, Sam’s best friend, because he was jealous of Sam’s bravery throughout the entire book. His character grew a little bit, but not much. Quinn pretty much sulked during the entire book. I think Gone would actually have been better off without Quinn in the story. There were times where he kind of disappeared and then, suddenly, he’d be back. Astrid is a smart and strong female character. I liked Astrid on the whole because she was smart, but I think she could have been more involved in the action. She kind of let the boys deal with everything, albeit she did steer them in the right direction when they planned out what to do. I thought that her relationship with Sam was sweet, but a tad over-the-top romantic in places. They are only 13 or 14 years old after all. Sam as the main protagonist was okay. He did infuriate me towards the beginning because he wouldn’t step up and organize the other children, which was partly why the other children accepted Caine so quickly. He just complained that he didn’t want to be a hero. Eventually, when he does step up, things become more interesting plot-wise, but it takes three quarters of the book for that to happen. That’s a lot of reluctance!

I enjoyed trying to figure out what had happened to all the adults aged 15 and older, and where the invisible barrier had come from. Sam and his friends find part of the answer, but that clearly doesn’t explain everything. For example, when Caine’s photographs the disappearance of a child on his birthday (cruel but ingenious), what they find raises more questions than answers. I’m also not sure how what Sam and his friends discover fits in with what Caine and his friends photograph. Plus, there is the “Darkness” down in the mines which seems to be instructing the coyotes and has powers (e.g., turning a hand into a whip). I’m not sure that these questions are really answered in Gone. Surprisingly, I wasn’t particularly upset with the lack of answers. I think that’s partly because Grant gives the reader enough to think about and I enjoy trying to figure out the answers myself. I also think that’s partly because I wasn’t so hooked on reading the book that I was desperate to find out the answers. I haven’t started reading the next book in the series, Hunger, yet. I will do, but I’m not in a rush. I think that’s due to the pacing issues where I only started turning the pages quickly towards the latter third of the book, and then it might have been a little too late to hook me enough to order to next book immediately.

Final Verdict: An interesting sci-fi book that will appeal to teenagers/adults and men/women alike.