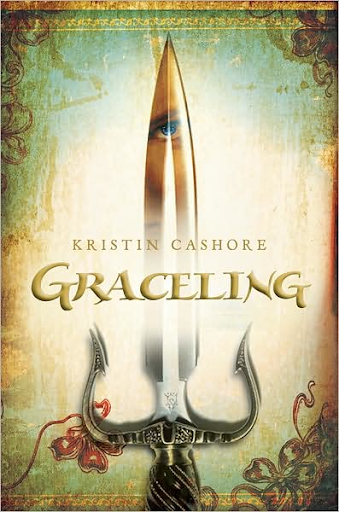 “Normal. She wasn’t normal. A girl Graced with killing, a royal thug? A girl who didn’t want the husbands Randa pushed on her, perfectly handsome and thoughtful men, a girl who panicked at the thought of a baby at her breast, or clinging to her ankles.”
Graceling, Kristin Cashore

Practically since this book came out people have been telling me that I need to read this book. I picked it up about a dozen times before deciding that I just didn’t have the time to invest in it, even though I liked the sound of the plot. Right before Christmas, I was browsing the books my library has in their e-library and saw the book. I needed something for my long plane rides so I thought I would give it a chance. However, it took me three more trips to the library (in two countries) before I finally finished the book.

This is going to be a much shorter summary than normal as there are some very big reveals that happen about 1/3 of the way into the book that guide the remainder plot, and I don’t want to ruin that for anyone. There is so much more to this story, but it is really hard to write a review for the entire book and not give away some neat plot bits.

The story follows and 18 year old named Katsa, who is Graced in killing. She comes from a land where people can be “Graced”, or have a special gift. These people are identifiable by their mismatch colored eyes (Katsa’s are blue and green). While the country where the Graced person lives and the type of Grace they have impact their standing in the world, Katsa’s place is clear. She killed a man with her bare hands when she was 8, and is now the enforcer for her uncle (with jobs ranging from intimidation to murder), the King. In order to fight back against the harm she must do for her King, she starts the Council, a secret group that spans all the seven kingdoms and helps all citizens. It is through her work for the Council that she rescues Grandfather Tealeaf (from Lienid), the father of a King, and a sweet old man that shouldn’t have any enemies. During the rescue, she stumbles across a man from Lienid Graced with fighting, and she lets him survive. When she returns to court, she finds that a Lienid prince (Po), who is Graced in fighting, is visiting. For the first time in her life Katsa meets someone who can almost keep up with her, and through their practice fighting they begin to grow closer. They both have to figure out who was behind the kidnapping of Grandfather Tealeaf. How can Katsa deal with being both a monster and a hero, and should they really trust each other?

In all honesty, I have mixed feelings about this book. Some parts of it are very well done, but then there are several parts where I feel there are new author problems. I want to love this book, I really do, but I can’t unconditionally love it.

I’ll start with two of my favorite things right away; Katsa and Po. I loved Katsa in the first half of the book, and in moments in the second half. She is very different from many of the females in YA literature. The only other female character that may come close is Katniss from The Hunger Games. The quote I have used for this book is from Katsa about herself. It was neat to find a heroine who is sure of herself, who knows she does not want kids or a husband, and sticks to it! While she is rather fantastical in the sense that she is basically unbeatable in a fight and rather immune to pain, there is still so much a reader can relate to. It may just be that I really identified with some of the things she says, but I really liked her. She stands up for what she believes and fights for it, but she is flawed. She still has fears and insecurities, and she is not perfect (and she would be the first to tell you this). Like Katniss she is aware of the draw she has, and the friends that align themselves around her (mostly without her realizing it). Unfortunately for me she changes a bit in the second half. It is not all bad, but it was strange to go from someone who never cries, to some who seems to be constantly crying (but at least she is still fighting even if she is crying).

The one thing that really surprised me was Po. I did not think I would like him. I just assumed he was going to be a boring love interest that was there to mostly appeal to the Tween audience. Instead, he is a very complex and interesting character, and honestly pretty perfect for Katsa. He is everything that Katsa is not – charming, smooth, constantly smiling, and very outwardly intelligent. But he is also a good person, and doesn’t let Katsa forget that she is a good person. Po isn’t always what he appears, and he will usually tell Katsa that whenever she starts to think she is in any way inferior to him. In fact, my favorite quote of the book is from him to Katsa: “True. But you’re better than I am, Katsa. And it doesn’t humiliate me…It humbles me. But it doesn’t humiliate me.” This is something that I think Cashore has captured perfectly; a strong woman doesn’t need to intimidate or humiliate the men. I think this shows why Po is a great guy; he understands his limitations and is not embarrassed by them. And the eloquence and bravery to say it really sums him up.

Now to talk about the part I was not so fond of. Overall, the story is interesting, but there are times where it just didn’t work. Things either happened too fast, or too much time was spent on rather unimportant things. In general, it just felt a bit like new author issues. For me the biggest issue was the changes in Katsa. She went from someone I really like to someone I kind of wanted to shake. While I would expect her to change because of what she has been through, it felt a bit overboard at times. But luckily she is still an interesting character and hero.

I think the worst part of the book is the last 40 or so pages. I understand that while the actual climax that happens just before this part is rather abrupt, and there are things that need to be addressed, it was not well done. The last bit was super slow, and did not seem to fit with most of the rest of the story. In fact, I am not really sure why Cashore included most of it. While there was a sort of interesting idea it was badly handled, and felt too much like a deadline hit before this part was finished being edited. The epilogue that follows works, but it is those pages before that just really brought down the whole end of the book (and really taints my memory of the rest of the novel). Even my brother who read the book right after me agreed that this bit is just “blah.”

Final Verdict: A good book with a fascinating premise, but not without its faults (and you may want to skip from the climax to the epilogue).