As seen in Stratford-Upon-Avon, England
Written by William Shakespeare
28 March 2013 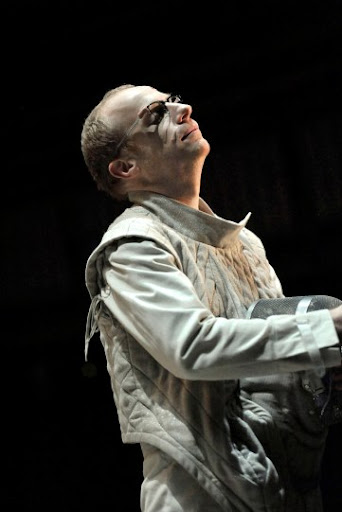 “There are more things in heaven and earth, Horatio,
Than are dreamt of in your philosophy.”
Hamlet, Hamlet by William Shakespeare

While Hamlet may be Shakespeare’s most famous play, and the one most people think of when you talk about the Bard, it is one that I am not as familiar with. Or so I thought. I didn’t realize until after seeing the play that I have a set way I picture this play happening, and I was not as open to changes as I thought.

For those of you who are unfamiliar with the play, there is a summary below. For those who are familiar, just skip ahead. The play is set in Denmark, two months after the previous King suddenly died, and his brother has just married the old King’s widow. The son of the King, Hamlet, is unable to move on, and is very sullen and unhappy at his mother’s new marriage. A couple of men on watch see the ghost of the old King, and decided to tell Hamlet. The ghost takes Hamlet aside and says that the old King was murdered by his brother, and Hamlet needs to get revenge on his uncle (but not to harm his mother). Hamlet decides to do this by pretending to be crazy. The court tries to figure out why Hamlet is acting so strange, and the uncle’s advisor believes it is love for his daughter, Ophelia, that is causing it. Yet Hamlet cruelly rejects Ophelia, and even some of his life-long friends (who were summoned by the uncle to figure out what is wrong). When a troupe of players arrives, Hamlet has them perform a play with a scene that matches what the ghost says happened, and the uncle reacts badly. When Hamlet’s mother tries to figure out what is wrong with Hamlet, Hamlet kills Ophelia’s father who is listening in. Hamlet is then sent to England (where the uncle has told them to behead Hamlet), but instead escapes and makes his way back. In the mean time Laertes, Ophelia’s brother, returns home to seek revenge for his father, and Ophelia commits suicide. Hamlet arrives at the same time as Ophelia’s funeral and mourns her, but angers Laertes. The uncle and Laertes come up with a plot to challenge Hamlet to a duel with a poisoned cup and a blade dipped in poison to make sure that Hamlet dies. During the duel, the Queen drinks the poison, and Hamlet and Laertes are both cut by the poisoned blade. Laertes admits the uncle’s role in this, and Hamlet cuts his uncle with the blade and then makes him drink the poison. The play ends with Hamlet’s death.

Overall, my general feeling was slight disappointment. I was really hoping for a more classic presentation of the play, but it was in modern dress. There was also an emphasis on fencing and fencing outfits, which I found interesting most of the time, I was really hoping for more realistic fights (especially as I trained in stage combat for about 4 years).

I think the most jarring thing for me was the man who played Hamlet. I have previously seen him play Prospero in The Tempest, so he was older than I was expecting for Hamlet. They did try to make him look a bit younger with his suit and glasses, but the bald patch in the back of his head kept breaking the illusion. More than his appearance was the way he played the character. His Hamlet was very melodramatic. He was able to really bring out the crazy side of Hamlet’s actions, and even had some genuinely funny moments. But for me he was way too over the top on the brooding scenes. He never quite got the dark brooding side of Hamlet that I love so much. Hamlet should be basically a modern day emo, in my opinion. This was really obvious in the scene where he first talks with his father’s ghost; in that scene he was crying into his father’s lap, which just felt so weird to see a 30 year old man do.

While Hamlet never measured up to what I wanted, many of the other actors did a great job. My favorite in the play is always Horatio, and this actor did an amazing job. I have seen him as King John in King John. I thought he was perfect for Horatio, although I think he could have done a great Hamlet, too. He was at times flummoxed by Hamlet, and yet there for his friend until the end. He was contemplative and yet had a presence on the stage.

The other person that stood out was the woman playing Ophelia, who was the Bastard in King John. She was amazing as the Ophelia in her crazy phase. She had a great voice and kept all eyes on her as you waited to see what she would do next. The one thing that did bother me, and I am not sure if this is her choice or the director’s choice, but this is the second time I have seen her sexually assaulted on stage. When Hamlet is spurning her and telling her to “get to a nunnery” he actually strips her down to her underclothes, and then spreads mud across her face. In King John, she was almost raped by King John (which has no basis in the actual story). It was again uncomfortable to watch. In Hamlet, there was slightly more cause in the text for the scene, but it still felt unnecessary.

There were some other parts that I liked. It was great to hear some of the most recognizable speeches in person. There was also more humor in this version than I am used to in Hamlet. The players were particularly interesting, from a lewd joke with a baguette and a “woman” with a full beard! The appearances of the King’s ghost were also interesting.

In the end, this performance didn’t enthrall me. It felt long, and I was ready for it to be done. The play was kind of summed up for me after the last dialogue, when an alarm and the sprinklers went on. No one in the audience knew if this was supposed to happen or not, and then the lights came up and the actors gathered on stage. It was that moment of bewilderment, where the audience was all looking at each other wondering what it meant, that summed up the play.

Final Verdict: One of the Bard’s most well known plays that everyone should see once, but you may be better off watching a video of a different staging.