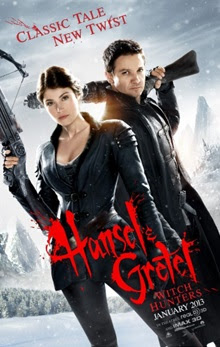 “Me and my sister… we have a past. We almost died at the hands of a witch. But that past made us stronger. We’d gotten a taste of blood. Witch blood. And we haven’t stopped since.”
Hansel in Hansel & Gretel

When I first saw the trailer for this movie at the cinema I was really excited. I believe this is the first time the Grimm brother’s Hansel & Gretel has been adapted into a film. I like how Hansel & Gretel: Witch Hunters starts similar to the Grimm brothers’ Hansel and Gretel, but the rest of the movie is an entirely new take on Hansel and Gretel with a pretty modern twist. One of the lines used to advertise the movie was, “classic tale, new twist”. I really think that sums up the movie.

Essentially, the movie begins with Hansel and Gretel’s farther taking them to the woods and leaving them there. The children wander the woods and stumble across a house made of candy. The children enter the house and are trapped there by a witch. The witch keeps Gretel as a slave and tries to fatten Hansel up. While the witch is distracted, Gretel helps Hansel escape and they burn the witch. The movie jumps forward to Hansel and Gretel as adults. They hunt witches, all witches. Hansel says, “Some people will say that not all witches are evil, that their powers could be used for good. I say burn them all!” When Hansel and Gretel are called to a small town where eleven children have been kidnapped by witches, they face a grand evil witch named Muriel who will not be easily beaten. Will Hansel and Gretel be able to stop the grand evil witch or will this be the last witch they fight?

I really liked how the witches were portrayed in the movie. Many modern stories about witches depict them as normal looking or even beautiful. Yet, the witches in Hansel & Gretel: Witch Hunters were more traditional in appearance. The kind of witches you see on Halloween, with a hooked nose and warts, only more extreme. I also found that the reason behind their appearance was interesting. Hansel explains that evil witches are slowly rotting because they use evil magic. I liked that this explanation was included. I actually wanted to see more of what the witches could do. It seemed that all the witches could ride brooms and some of the witches appeared to have other abilities. There wasn’t a great deal of time focused on any of the witches apart from the grand evil witch. Her magic was interesting, and the special effect where the grand evil witch’s disguise disappeared to reveal her true appearance was very well done.

I liked the brother-sister relationship between Hansel and Gretel. I think it would have been easy for the actors to overact the relationship. The balance was just right between the interactions showing sibling banter and the actions showing that they cared about each other. Gretel was my favorite out of the two because she was kick-ass. I really liked that she stood up for herself during a time where woman didn’t have as many rights, and she fought as well as Hansel. I particularly enjoyed the scene where she head-butts the sheriff of a small town. Also, Gretel isn’t a damsel in distress and Hansel doesn’t treat her that way. He leaves her alone at times to fight because he knows she can look after herself.

I did find that the plot was pretty predictable, which let the movie down. The movie would have been really great if the plot had been better because it had all the right elements. As a result, the movie is enjoyable but it’s not a show stopper. I will probably watch it again, but it won’t become one of my favorites and I won’t be buying the movie.

I didn’t see the point to some of the characters. It felt like the characters were included just so that Hansel and Gretel weren’t the only characters for 80% of the movie. For example, the young boy who idolizes Hansel and Gretel didn’t seem necessary. He didn’t really help that much and he could have easily been removed from the movie without any detriment to the plot. Then there was Mina. I think she had more of a purpose in the movie, but again, she felt like a character brought in to accomplish a few things and then wasn’t necessary anymore.

I also found the romance that occurred for Hansel happened rather suddenly, and the scene was a little awkward to watch. There also seemed to be some sort of romance between Gretel and Edward, a troll! I’m not sure if I interpreted it incorrectly so I’d be glad to hear whether you thought the same as well.

Final Verdict: Overall, a nice take on the Grimm brothers’ Hansel & Gretel, but not a movie you’ll want to re-watch again and again.