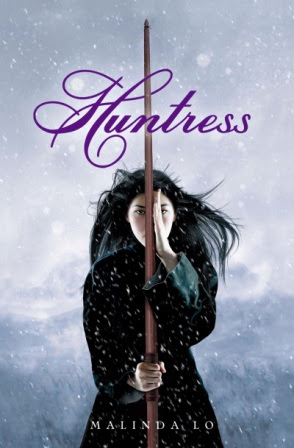 “I have been a student here for almost six years. Not the best student, but I have paid attention. And the one thing that has always made sense to me is the teaching that every individual has the right to make choices about their lives. Every minute of every day, we make choices. Why would you take that away from me now?”
Kaede in Huntress by Malinda Lo

When I found out that Malinda Lo would be releasing a second book, and that it would be revisiting the same world as Ash, I could not get a pre-order fast enough. Then to make it even better, Lo released the first 20 pages on her blog early, and the wait seemed even longer. But in the end it was worth the wait, even if Ash is still my favorite of Lo’s books.

The novel is set centuries before Ash. It has been a very rough several years prior to the start of the novel, there have been poor harvest, and this year, summer has not come. This means the country is close to revolt and the people are starving. At this time of crisis, a mysterious invitation arrives to the King, an invitation from the Fairy Queen for a meeting at Midsummer. The King and his advisor travel to the Academy of the Sages to have the message decoded. While there, they ask the sages to consult their stones to see who is to go from the Sages, and it says one of their most gifted students, Taisin. She in turn has a vision of the King’s Advisor’s daughter, another student at the Academy, and knows that Kaede is meant to come as well. But in her vision, Taisin realizes she will be in love with Kaede at some point in the future and will at that point have to watch Kaede leave her behind. This is a terrifying possibility to Taisin as she will be a Sage, and part of her vow is to be celibate. Taisin, Kaede, the King’s only son, and 3 guards set off on the dangerous journey to the Fairy Queen’s court. They have to find their way through the ravaged country, into the woods that are uncharted and have malevolent beings in them, all to arrive at a meeting they know nothing about. Who will survive and make it to the meeting? And what will Taisin and Kaede do as the journey forces them closer? Will Taisin give up her dreams of being a sage?

There are hints of the connection between Huntress and Ash, but they are completely different books, and really cultures. While Ash is a retelling of Cinderella and more of a fairytale, Huntress is more of an epic journey story. It is not really until the last 25% of the book that you get the clear connections between the two and the name of the book. But I think this actually worked in Lo’s favor.

One of the best aspects of the story is Lo’s world building ability. Between the in depth descriptions of the land and the map at the beginning of the book, you get a real sense of the world. And through the characters, and their interactions, we are able to get a glimpse of different customs and traditions. It is also interesting to see the humans attempt to navigate the relations with the fairies, where they are not sure if the rules of their courts are similar enough.

The main strength of the story though is the two main characters. I find that there are bits of both of them that I can relate to. With Taisin, we see her try to navigate her current feelings and the feelings she has learned about in her vision. She is from a poor family, and has only been accepted at the Academy as she was particularly gifted. Her one goal since she was little was to be a sage, and she has never considered being anything else, until this journey. I think Lo handle’s Taisin’s fear of her feelings and the way she tries not to fall in love very well. Taisin also has to deal with the problem of being only a student, but the one that everyone turns to for advice on dealing with the Xi (the main fairy race) and the rest of the otherworldly things.

I think my favorite of the two characters is Kaede. She is the daughter of the King’s Adviser, and has grown up in luxury and a friend of royalty. Her father wants her to marry a Lord to help his position in court, as well as attempting to stop some of the possible rebellions. But Kaede knows that she could never love a man, and knows that being the wife of a Lord, and the responsibilities that go with it (such as being pregnant within the first year) are not what she wants. She fights back when it looks like she has no choice about attempting this journey, and ultimately joins the expedition. She is confused as to why Taisin seems to try and stay aloof, but watches her frequently. Kaede also has to deal with the fact that she has no real set job in the group, she is not a guard, she is not a Sage, and she is not a member of the royal family. But ultimately she will be the most important person on the journey. It is easy to identify with her easy nature, but also her restlessness. She does not know what she wants in the future, or what she can do, but she finds physical activities help her quiet her mind. So on the journey she learns to shoot a bow, and she learns at the academy how to throw knives. I feel a good portion of the story is Kaede finding herself, and her purpose.

The fairy court and the otherworldly elements are well handled. They are not the nice fairies of modern children’s tales, but the more dangerous ones of old stories. There are dangerous creatures that replace children, the strange bodies that people find in the woods, ghosts that whisper and call to the group. The most full explored are the Xi, the most human in appearance, who attempt to rule in the Fairy land. The Xi are dazzling and so different from the humans, and there is a dangerous edge to some of the interactions between the two groups. It is the Fairy Queen of the Xi who provides the ultimate challenge to the weary humans, something they may not survive.

Overall, I really enjoyed the book, but there are some things I am not as fond of. I feel like there is less substance to the book. Sitting here writing this, I know I read all the pages, but I have trouble thinking of that many distinct things that happened. Also, the ending was a little upsetting to me, it fits but it is not my favorite. I think these few drawbacks are countered by the characters though.

For those who agree that the ending is a bit open or unsettling, there is a short continuation of the story. Lo published a short story called The Fox in an online magazine. It picks up the story a year or so after Huntress ends. It is a nice glimpse at what followed. It was after reading this and tweeting about it that I got my first reply from Lo. My suggestion is to read this short story, and listen to the Placebo song, Protect me from what I Want, which is what my iPod randomly selected, and it fits perfectly.

Final Verdict: A good read, a good journey, and a good romance. Not for everyone, but engaging!