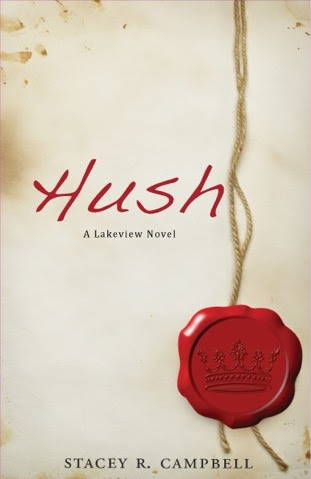 “Following the tragic demise of one of Europe’s most beloved royal families, Max has stumbled upon information he thinks may lead to a lost royal heir, and now he is on a quest halfway around the world to see if he’s right.”
Hush by Stacey R. Campbell

I have had the opportunity to read Hush, thanks to NetGalley. The book has not yet been released, so the copy I have read is an advance reader copy. I didn’t really enjoy this book unfortunately. The quote above pretty much provides the entire summary you need for this book. I’ve tried to write a more detailed version but there really isn’t that much that happens: When the royal boat suspiciously blows up, killing the entire royal family of Tamera, the country is at a loss. The country loved their royal family and no one wants Lord Byron, the closest living relative, to take the throne. Max, a student at Aberdeen University, UK, stumbles across photographs of his recently deceased aunt with the Tamera Royal Princess, Olivia, as a child. He also uncovers evidence that suggests Olivia gave birth to an illegitimate child named Blakely, who would now be heir to the royal throne. Max pursues the lead half-way around the world to a boarding school named Lakeview to determine whether his suspicions are true. Is Blakely the daughter of Olivia and heir to the Tamera throne? Will Max be able to complete his investigation without his personal feelings getting in the way? What will Lord Byron do if he finds out that there is an heir to the throne that precedes him in line for succession?

The pace of this book was really slow. Other than the main plot, not much else happened. Plus, the main plot wasn’t really that intriguing. While Max only has a lead to the whereabouts of Olivia’s daughter, Blakely, and he is uncertain whether any of the information is true, the reader knows this for sure from the prologue. There weren’t really any leads to uncover for the reader so it was painful waiting for Max to uncover the truth. As a result, the majority of the book ends up being Max trying to get to know Blakely, which progresses slowly. There was just too much detail, e.g., even text messages between Max and Blakely were included and these were about really mundane events. I’ll give the author credit because I think more text messages need to be included in books considering how often young adults communicate in this manner. However, I don’t think they were used effectively. It ended up being rather like the diary of an average pair of students getting to know one another. It’s rather dull. I think that if there had been action interspersed with the development of Max and Blakely’s friendship the story line might have been marginally better. I think the mystery surrounding Blakely was meant to provide that action but the chapters where the focus shifted to this weren’t any more interesting. For example, the chapters where Max’s professor is doing some investigation in Aberdeen or where a reporter tries to scoop Max are long-winded and I ended up skim reading.

Asides from not much happening, what did happen was predictable. I’ve already mentioned that the reader knew from the beginning that Blakely was the daughter of Princess Olivia so when Max figured this out it wasn’t surprising. There weren’t any real twists and turns. Even when a character was adamant that they would not have feelings for another, it was obvious the character would give in. Nothing caught me off guard or surprised me.

The pace did pick up a little towards the ending as people started to learn about Blakely, but it was a little too late by that point. Plus, there is one character that comes into the end of the book that is recommended for a particular task. The problem is that he is so easily foiled by two young students just because they are well built from playing rugby! I can’t explain in more detail without ruining a plot point. I think when you read it you will know what I am talking about.

I felt that the characters fell flat. There was no depth to them. I felt like nothing interesting had ever happened to them before, other than what was mentioned in the book. I also didn’t have any expectations of anything interesting happening after the book finished. The characters seemed to have lived happy, normal lives. The point of view also jumped around quite a lot at unexpected moments which I felt impacted my ability to connect to the characters. In addition to the individual characters falling flat, I felt the romance lacked chemistry. I didn’t root for Max and Blakely to get together and I didn’t care if they broke up or stayed together. The romance was rather overly romantic in places so I ended up rolling my eyes or cringing. Plus, the moment where Blakely finds out Max came to Lakeview to investigate whether she was the princess is a rather clichéd reaction.

Final Verdict: A chore to read.