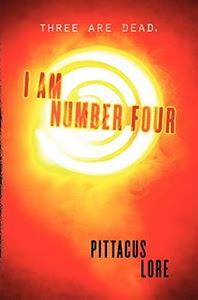 “There were NINE of us who escaped…
Number ONE was killed in Malaysia.
Number TWO was murdered in England.
Number THREE was hunted down in Kenya.
Before they come for the others, they’ll come for me…
I AM NUMBER FOUR.”
John Smith, I am Number Four by Pittacus Lore

John Smith is an alien from a planet called Lorien. He was one of nine Garde who escaped the planet when it came under attack. The Mogadorians are hunting down the nine Garde and killing them one-by-one. The first three are already dead. The Garde have to be killed in a certain order because of a protection charm, and John is number four, making him next. To stay hidden John moves from small to small town, changing his identity each time. He always keeps a low profile and never makes attachments to people. When John moves to a town in Ohio, he makes a real friend and gets a girlfriend. John doesn’t want to run anymore. Can John keep a low profile and avoid detection or will he be forced to leave the town and people that he has come to love?

It’s taken me a while to read I am Number Four because I’m not a huge fan of sci-fi and the book has aliens in it. Actually, I didn’t find the sci-fi element overwhelming, and I thought the Legacies (powers that John has) brought a strong fantasy element to the book. So, overall, I enjoyed this book. I don’t think it’s a show stopper and I probably wouldn’t read it again anytime soon, but if you’re looking for a book to borrow from a library and there’s nothing else, it’s worth a read. It’s kind of an easy read where you don’t need to think very much. If you do, problems crop up in the story’s plot, but I’ll talk about that a little bit later in the review.

There are also fairly large holes in the smaller plot points too. For example, Sarah is John’s girlfriend in the book, and her ex-boyfriend, Mark is a bully. He bullies John by stealing his phone, fighting etc… Near the end of the book, John finds Mark at his house with Henri (John’s Cepan/mentor who came with him from Lorien). Mark seems to know what John is and he joins them in the final battle. I’m really not sure how Mark came into the last third of the book. I don’t know how Mark knows what is going on and why he would want to be involved in John’s fight for survival when Mark dislikes John. There are so many questions surrounding this character, and I don’t think there’s any mystery background story to Mark, I think it’s just an oversight of the book. This is just one example of the holes in the plot; there are a few!

Throughout I am Number Four the reader learns about what happened to Lorien and the Lorien people through flashbacks that John has. I found the flashbacks interesting because some of them are John’s memories from a really young age that no human child would be able to access, and others are about the invasion itself. The flashbacks about the invasion were interesting to read and they brought some action to the story. I do wish that there was a little more action in these flashbacks because I think there was more potential to bring the battle to life. I also think that there were too many flashbacks about the same thing. John had multiple flashbacks to the invasion and each time he learned a little more. While I think this is interesting, it became a little repetitive. Also, some of the flashbacks were a little long-winded for such a small revelation. These flashbacks did break up the pace of the book because the reader would go from Alex training a new Legacy to a long flashback and then back again. For example, at one point, Henri is helping Alex expand one of his Legacies, Alex is trying to relax and he has a long flashback, when the reader returns to the present the Legacy is expanded already.

I found that the first few scenes where John received his first legacy exciting. I liked the danger that getting a legacy at school caused. It kind of fizzled out from there though. The first legacy that John gets is useful but it’s more defensive than offensive, and he gets control really quickly. Yet, this power is highly coveted! I had high hopes that the other two legacies that John developed would be more offensive because other members of the Garde do have offensive powers. While one legacy was kind of offensive, this legacy is developed by all of the Garde, the other legacy wasn’t offensive at all. I think that more could have been done with John’s first legacy or generally just more scenes where training happened, just to increase the pace of the book.

I found the romance between John and Sarah very unrealistic. There was just such a sudden and strong connection between the two of them. Sarah hadn’t long been broken up from Mark and yet she was determined to have John. John was besotted with her from the minute he sees her at school. There just isn’t any build up to the relationship, it just suddenly is there. It doesn’t make the reader invested because the reader hasn’t wanted the relationship to happen. Plus, the relationship was too smooth sailing throughout. I mean, even when Sarah finds out that John is an alien, she just accepts it. I know that the reason for her finding out is fairly big evidence, but still. You think someone might be a little freaked out that aliens exist and her boyfriend is one; they haven’t been dating long!

I also found that the romance was a bit soppy in places and over-the-top. John just didn’t have a very strong male voice. He was too connected to his emotions. For example, at one point he thinks: I’ve never felt this way about anyone before. Like I’m floating on air when we’re together, and I dread the times when we’re apart, like now, despite having just spent the last couple of hours with her. Sarah gives some purpose to our running and hiding, a reason that transcends mere survival. A reason to win. And to know that I may be putting her life in danger by being with her – well, it terrifies me. I think John is a character that reflects what women want in a man, rather than a man per se. It makes the story less believable. I also found John’s character was rather immature. Despite John and Henri being in imminent danger, John refuses to leave Paradise, Ohio because he has a girlfriend and a friend. His refusal to leave puts everyone in danger and he isn’t even sorry for it. It’s pretty selfish and doesn’t make John very likeable. It would have been better for John and Henri to be ambushed as they leave or something.

The battle at the end was less than impressive. I kept waiting for John to do something amazing and it never happened. It was rather frustrating to read actually because the whole book built John up, and Henri says, “When you have lost hope, you have lost everything. And when you think all is lost, when all is dire and bleak, there is always hope,” a few times. I really didn’t feel any hope throughout in the battle. Nobody on the good guy side did anything that was impressive, except maybe Bernie Kosar (John’s dog). I also found that by comparison to other characters involved in the battle, John fell flat. I wanted to know what they were up to rather than have John complain about how he couldn’t do anything. Anyway, I won’t say anymore because I don’t want to spoil what happens.

I’m going to watch the movie adaptation of I am Number Four next, so here’s hoping it’s an improvement. I have heard good things so I am hopeful.

Final Verdict: A book to read mindlessly. Thinking only means you see the large plot holes and the lack of depth in the characters.