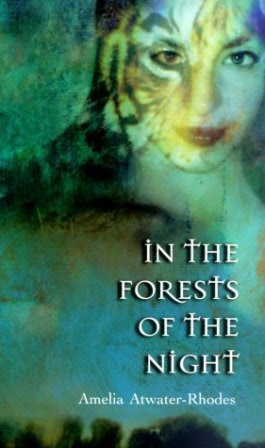 “Love is the strongest emotion any creature can feel except for hate, but hate can’t hurt you. Love, and trust, and friendship, and all the other emotions humans value so much, are the only emotions that can bring pain. Only love can break a heart into so many pieces.”
Risika, In the Forest of the Night by Amelia Atwater-Rhodes

This is going to be another novel that is very difficult to talk about fairly. I first read this book right after it came out, and I have to say it changed me. I won’t pretend it is really well written or extremely novel, it just happened to come out while I was a preteen and hit right when I needed it. This was the first real vampire novel I had ever read and from it I started to devour anything with vampires, werewolves, and anything vaguely occult. This is the book that helped me discover Anne Rice after I read a review calling Atwater-Rhodes a young adult version of Ann Rice.

One of the most striking things about this novel is that Atwater-Rhodes wrote it when she was 13 and had it published before she was 15 (it was supposed to be published on her 14th birthday). Knowing this, while I read the book at 13, made me realize that it was possible for me to write as well. It was then that I really began to do creative writing. While I have yet to finish my own novel, I do owe a lot to this novel.

While it is a fast read and not very long, there is a lot packed into it. The story is about the life of a vampire named Risika, and is told in two story arcs. There is the present day story that follows Risika as she settles into life, but is interrupted by the one person from her past that she cannot stand, a vampire named Aubrey. There is a history between the two that means they cannot tolerate each other, and Risika has already lost a fight to Aubrey once, but to back down would mean showing weakness. The vampires cannot show weakness, it means you are prey, but neither is willing to just attack so they have to resort to a strange dance and taunts. The other story arc tells the story of Rachel, the young girl from the late 1600’s in Massachusetts, who would be turned into Risika. Rachel and her twin brother are close and live happily with their father, step-mother and younger sister. Her brother begins to believe that he has a power to control things, and losses control and burns their younger sister. He then starts to become distant to Rachel, just as a strange visitor stops by the house and gives her a black rose, which she pricks her finger upon. With one drop of blood Rachel has unknowingly condemned herself to a fate she did not even know existed. How will she become Risika? And will Risika be able to finally stand up to Aubrey or will she die for real this time?

One of the things I really love about this book and the others set in this world, is that the vampires are still dangerous. They are sympathetic and Atwater-Rhodes often sets the story from their point of view, but most of them (besides a few in the later books) drink human blood, and still kill people. One of the themes that Risika has to deal with is that she used to be human, but she is not human anymore and there is no good thinking as a human. It is hard on her to realize that humanity is a weakness in vampires, and a weakness can mean death or subjugation, a fate she is not willing to live with. The Risika that we see at the end of the book is a very different creature than Rachel, and this is a fascinating thing that is often overlooked in many of the modern vampire tales. Aubrey, on the other hand, is a great vampire, he is attractive, but he is not human; he is a hunter and he relishes being the predator. We never see him in conflict with his nature.

Atwater-Rhodes has taken a very unique path in regards to what parts of the vampire legends she uses. Risika talks about the sun, religious icons, silver, and decapitation and explains their ineffectiveness quite frankly. The hunger is still present, but it can be controlled if they feed in smaller amounts regularly, but if they expend too much energy or wait too long, the animal instincts start to reappear and their senses shrink to focus on blood alone! The vampires also grow stronger as they age, and with the strength their reflections fade. Their powers grow mostly with age, but there is also power from having a traumatic transformation. If one is transformed against their will and they struggle to live, they will make the most powerful of the vampires. Those who choose to be transformed and welcome it are reborn weak and if they do not have a stronger protector can easily be killed by vampire hunters or others of their kind. Some vampires are good at picking out strong willed humans that they know will make good vampires, and then turning them.

One of the most interesting aspects of the vampires in this story is their mental abilities. There are different blood lineages of vampires (traced from who turned who), and they are known to have different abilities or personalities or even styles. Risika and Aubrey are of the same lineage, and their line is known for their mental abilities. These can be used to aid their hunting and existence. But it can also be used to fight and control. So when vampires of their caliber do come to blows it is not just a physical fight, but two fights happening at the same time; a mental battle and a physical battle. It is the combination of the two that makes these fights so fascinating.

While it is not a very novel story and not very involved, it is well told. This is a great comfort read and can be read in one day (or a couple of hours really). And it is a nice change from all the romances in vampire fiction!

Final Verdict: Sink your teeth into this right away! An easy and enjoyable read for the rebellious teenager that lives in your heart!

If you like this book, or want more Aubrey, continue with Demon in My View.