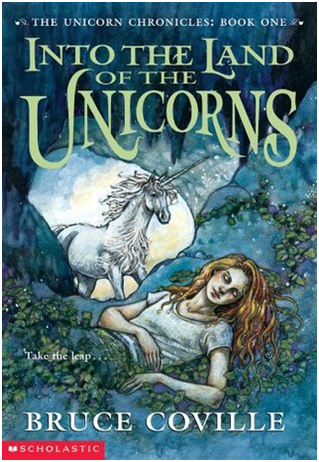 “There’s lots of kinds of chains. You can’t see most of them, the one’s that bind folks together. But people build them, link by link. Sometimes the links are weak, snap like this one did. That’s another funny thing, now that I think of it. Sometimes when you mend a chain, the place where you fix it is strongest of all.”
Into the Land of the Unicorns by Bruce Coville

Like many of my favourite books, Into the Land of the Unicorns by Bruce Coville was a book I borrowed from my dad’s 5th grade classroom library, and it never returned. To this day, the book still lives on my shelf with our last name written on the side like all of his library books. I went through a couple of phases of reading books about unicorns, but The Unicorn Chronicles, of which this is the first book, was my favourite series. When I recently went to borrow an audio-book from the library, I was shocked to see that two more books had been added to the series while I had completed university. So I set out to reacquaint myself with the first two books, and, finally, read the two latest novels in The Unicorn Chronicles.

In Into the Land of the Unicorns, a young girl, named Cara, finds herself magically transported to a new world after following her grandmother’s advice to jump off the roof of a church (with a special amulet) after a strange man started following them. Unfortunately, her wonder at the beautiful new land of Luster is interrupted when she is almost killed and her amulet is taken by a creature called a delver (goblin-like creatures that live underground). She is saved by the Dimblethum (a bearlike person/creature) and the Squijum (a cross between a monkey and a squirrel). However, it is a unicorn, named Lightfoot, who heals her wounds and is able to talk to her. She discovers that Luster is the land of the unicorns, and the message Cara’s grandmother told her to give to the old one, is meant for the unicorn queen. After the Dimblethum recovers Cara’s amulet, they realize it is dangerous. The enemies of the unicorns could use the amulet to open a gate between Luster and Earth and kill all the unicorns. So Cara and her new friends set off to meet the queen of the unicorns, and keep the amulet safe. Unfortunately, both the delvers and the man from Earth are now following them. Can Cara and her friends make it to the queen with the amulet? And what other secrets did her grandmother keep from her?

The book was as good as I remembered it. The audio-book format actually really added to my enjoyment of the story. Unlike most other audio-books, there was a full cast to play all the characters, and they kept the story unabridged (many full cast audio-books are adapted for a full cast, which means parts of the story are lost). It was great to hear voices that matched how I had imagined them and were very easily identifiable. Even better is that Coville himself is the narrator. I love when authors read their own work (like Neil Gaiman often does). Honestly, I would highly recommend this story for anyone with small children, or if you want to try an audio-book, start here!

As for the story itself (plot-wise), it was how I remembered it. I love Cara, as she is young (and she feels her age for once), but she is able to accomplish so much. She clearly worries about her grandmother, and is afraid of the dangers she faces, but she faces them and triumphs. This is the kind of character I still love, as she is a great role-model for young kids.

It felt a bit like coming home to return to Luster. I was amazed at how much of the world I remembered, as I usually pay very little attention to landscapes in stories. Luster feels fantastical, and different from Earth, with such different foliage and geography. Even the food was fun to try and imagine as Cara learned to just try what was handed to her. The best part of Luster is all the different creatures that Cara encounters. With the voices and the descriptions, these creatures really came alive. While the Squijum probably appears cute, I was glad it didn’t speak too much as it was a rather squeaky and annoying voice. I love the Dimblethum and can really understand how Cara came to trust him so much.

The unicorns, of course, are the best creatures in Luster. Like Cara, my favourite is Lightfoot. He is the young unicorn she first meets in Luster, and the rebel of the herd. While the first moments with him are a bit scary, I think most kids will be jealous of Cara being able to have mental conversations with Lightfoot whenever they touch. I loved watching their friendship grow, and, for once, I never had to worry about any romantic feelings coming between their friendship!

I think the one biggest change when reading this novel as an adult is how much better I understand the really complicated relationships are between all the humans. Cara is forced to make some very adult decisions, and I think she chooses well, but I think I better understand now the true weight of those decisions. As a kid, it is sometimes easy to assume the character will do the “right” thing because they don’t understand all the complications involved. I think the way these moments were handled, shows why Coville is such a beloved children’s author.

Final Verdict: A great story for kids, with a strong little girl, some amazing creatures, and a great adventure.