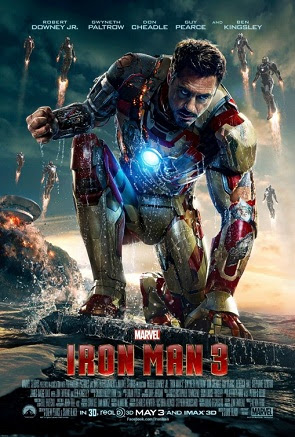 “A wise man once said: we make our own demons. Whatever happened to him I wish I knew, did he conquer them, what was he like, did he have armor like mine… Anyway, bottom line: I said it, because HE said it. So, this all began a long time back, in 1999…”
Tony Stark in Iron Man 3

As soon as this movie had a concrete release date, I realized it coincided with my trip back home to the USA. My mother, realizing the same, announced we would be seeing it while I was home. I was so excited to see this movie, especially after how much I had enjoyed Marvel’s The Avengers. To try and make my experience as real as possible, I avoided watching the trailers and tried to avoid spoilers that were sneaking online.

The movie starts with the quote above from Tony and a flashback to a party at New Year’s Eve party between 1999 and 2000. Then, in the present, there is a new terrorist, The Mandarin, who has been setting off explosions (where no bomb fragments have been found), and he is fond of broadcasting videos about his attempt to educate America through the bombings. Tony is not really interested, until his long time friend and sometimes chauffer/boxing buddy/security, Happy, is caught in one of the blasts and severely injured. How much will Tony have to sacrifice to get revenge on this terrorist? And did his previous actions cause all of this to happen?

So my first thought upon leaving the cinema was, “That was fun, but…” which is still how I feel. It was fun to watch, but there was so much that just didn’t work for me. The main thing I was looking forward to seeing was how the director was going to handle the events from The Avengers. I was excited to see how they would explain the other heroes not coming to Iron Man’s aid…and I am still waiting. There is no way you can tell me that Captain America is just sitting there doing nothing about the Mandarin terrorizing America. But there is no hint where they or SHEILD were throughout the whole movie. When Marvel has worked so hard to place all these separate superhero movies into the same universe, and created a blockbuster movie about bringing them all together, you cannot go backwards and pretend that everyone are back in their own franchises. I might have been able to suspend my belief, except that Black, the director, does reference to the events in New York in other ways (which I like even less). So he was trying to have his cake and eat it too, and I am left unimpressed.

There were things I liked and I will mention them before I get to everything else. First off, Robert Downey Jr. again does a phenomenal job bringing Tony Stark to life. As I mention constantly, it is so hard to tell where RDJ starts and Tony stops, or is it the other way around. In my mind there never could be anyone else for this part (although there is talk that there might not be anything past Avengers 2 for RDJ and Platrow). As with the previous movies with Tony in them, there are amazing one liners and banter. The things that come out of his mouth are just as extravagant as his character. Some of his best lines in this movie come from his interactions with a young boy, who seems very similar to how Tony must have been as a child.

There were two other things that I liked. The first were the tie-ins to the previous Iron Man movies, especially the party at the start of Iron Man 3. My favourite was seeing Yinsen, the man who saved Tony’s life in the cave in the first movie, who mentions in the first movie about meeting Tony at the party shown at the start of Iron Man 3! The second thing I liked were the few moments that Pepper Potts gets to do her thing. She has a couple of great moments of kick-butt-ness, and I loved them. But sadly they were very short and much less than what was hyped about.

However, there were other scenes with Pepper that just felt “blah.” Especially at the beginning of the movie when she meets with Killian, a scientist Tony was awful to at the party in 1999. It feels like she is flirting with him, or trying to make Tony jealous, yet Tony isn’t there. There are other parts where she is just not as in control of things as she has been in the previous three movies she has been in (Iron Man 1, Iron Man 2, and The Avengers), and I didn’t like it.

Pepper was not the only one that was different, or altered. The suits were also different. However, when I say different, I mean they were practically missing for the first ¾ of the movie! The new director for this movie wanted to strip the franchise back to Tony in the cave in the desert, and while that sounds cool on paper, in a superhero movie, it just creates a lot of dead time, and confusion for the fans. Especially with Tony’s fight-plan at the end, this absence of suits is very questionable.

Tied in with the lack of suits is Tony’s new mental problem after the events in New York. He seems to have developed panic attacks (or more likely PTSD). While is sort of understandable, since he did practically die, but it seems out of place. Personally, I would have thought the events he suffered at the beginning of the series in Iron Man 1, where he goes from a rich playboy, to having his heart hooked up to a car battery in a cave in a war torn country, is more traumatic. Yet ignoring that, as PTSD can be triggered different ways, it was just very clumsily handled in the plot. It was used to create tension in important scenes, and then Tony miraculously overcame it.

The last problem I have with this movie, is the villain. I won’t go too much into this in case people haven’t seen the movie yet. For me, by the end of the movie there is still no clear motive for the villain. I am not sure what he was after, it was sort of revenge, sort of money, but there was no real clear driving force. I think the villain could have been so much more threatening if he had had a clear desire or drive. But it did give rise to one of my favourite quotes, and that was by one of the other henchmen, “Don’t shoot! Seriously, I don’t even like working here. They are so weird!”

Final Verdict: An enjoyable summer movie, but ultimately doesn’t live up to the earlier movies.

How it should have Ended (HISHE) does wonderful videos on what should have happened. I think some of this matches exactly what I was saying. Only watch if you have already seen Iron Man 3 or don’t mind spoilers.