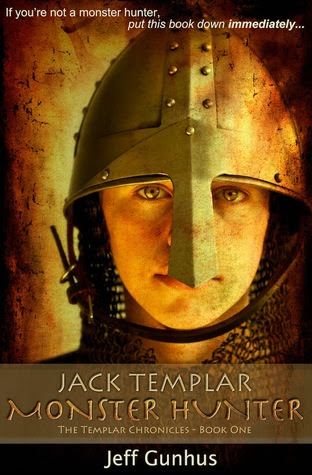 “If you read this book, you will be part of this world and the monsters will come after you too. You will start to see things that no other humans can see. The shadows will move when you walk near them. The creatures of the night will seek you out, testing the doors and windows of your house, looking for a way in.”
Jack Templar: Monster Hunter- Book 1 by Jeff Gunhus

I stumbled across this book when I was looking for books on NetGalley. It was the cover that caught my attention, as the young boy in armor reminded me of a scene from The Two Towers movie. The summary sounded interesting enough so I requested it.

The story is that of Jack, a young boy whose life changes drastically when he turns 14. On the day before his birthday, Jack wakes up to find that he suddenly is faster and more muscular than when he went to sleep. However, throughout the day, strange people comment on the change, and seem very excited about it. He finds out that there are monsters in the world, and they are all coming to kill him on his birthday. Will he survive and those closest to him survive the night?

I have to start with the fact that I absolutely hated! This was where Jack spends a lot of the books talking directly to the reader. I am not usually a fan of this, and the overuse of it, especially at the start, was excruciating for me to make it through. I read out some of the awful lines to Frances, and we both cringed at the style and narration. Most of this appeared at the start in the form of two, long warnings about the dangers of reading this book, and how gruesome the book was going to be. Unfortunately, it does not end after the warnings, instead, throughout the book Jack constantly stops the flow to talk to us. I found these not only annoying, but they interrupted some really good scenes.

I found Jack hard to relate to, and in fact he reminded me of all the kids I couldn’t stand when I was that age. He is very focused on being cool, and is very self important. He feels a bit like a stereotype of a middle school boy, one who is not the cool kid. His friends are not much better, and T-Rex was rather disgusting.

However, the action sequences were really well done. I really enjoyed Jack’s fight with a bully at school. As someone who has trained in martial arts and in stage combat, it was very well done. The movements are well described, and it was easy to imagine what was happening. Then when Jack starts fighting the monsters, it was exciting to read.

One of my favorite things about this book is all the women. There are actually quite a few, and all of them are really strong. There is Jack’s Aunt, who has more to her than meets the eye, and shows that love can overcome a lot. My favorite was Ms. Hester, the school secretary, who has a great car, and a unique view on school rules. Eva is a close second as my favorite, as she is a fighter and extremely fierce. Eva is missing a hand, and when you find out how she lost it you realize just how strong she is!

The book feels it was meant for someone (probably a young boy) who is not usually interested in reading (which looking at the author information at the end confirmed this). If you can get past the first half of the book, where Jack speaks the most to the reader, the book gets much better. I think young readers will like this, and will like the fun of imagining their life is in danger from reading the book. The plot is interesting, but feels like a watered down version of many older fantasy books. Right now I have no interest in reading on in this series.

Final Verdict: An interesting book for a young reluctant reader, but for the more avid reader there are better books out there.