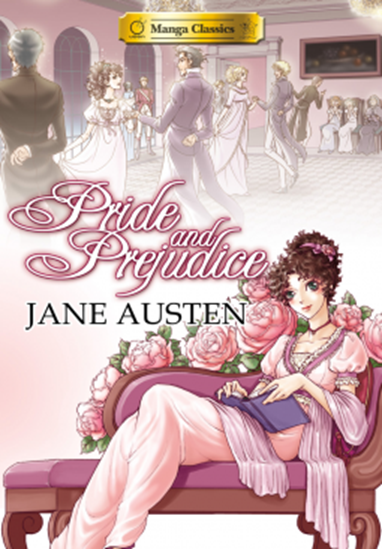 “I could easily forgive his pride, if he had not mortified mine.”
Lizzie Bennett in Pride and Prejudice by Jane Austen

This past year I have been on a bit of a Regency Era kick, specifically to anything that is related to Pride and Prejudice. So when I saw that it was going to be released as a graphic novel in the style of Japanese Manga (a story/art form that I have loved since I was a child) I could not request the book fast enough. 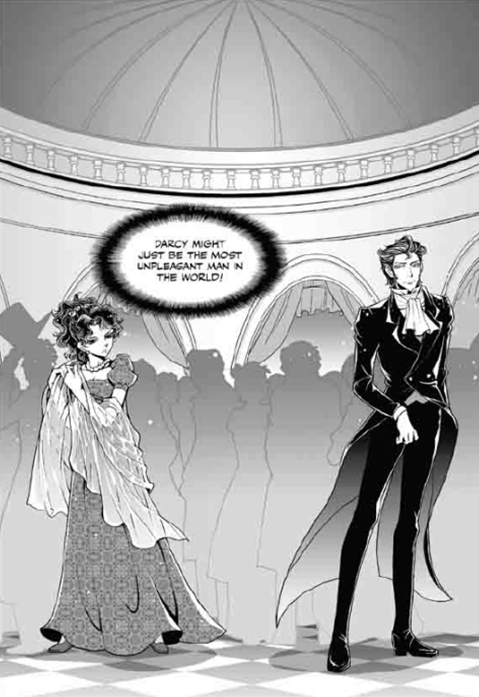 The plot pretty closely follows the plot of Jane Austen’s original Pride and Prejudice. For those that are unfamiliar with the classic the story follows the rough road to love between Elizabeth (Eliza/Lizzzie) Bennett and the wealthier Mr. Darcy. Eliza is the second oldest of five sisters, who must marry well due to the fact that their father’s money is destined for their closest male relative. When a new wealthy neighbor, Mr. Bingley, moves in Mrs. Bennett is determined one of her daughters will convince Mr. Bingley to propose. However, when they first meet Mr. Bingley at a ball he is not alone, he is accompanied by his arrogant sister and the aloof Mr. Darcy, who would be a better catch financially. Jane and Mr. Bingley are instantly smitten with each other, but Eliza and Darcy fight. What follows is many events and social ranking issues that keep Jane and Bingley from each other, and Eliza and Darcy slowly start to change how they feel for each other. In the mix are several unwelcome proposals, unfriendly relatives, several balls, many walks and letters, and a scandal that could ruin the family. However, the book ends with Jane marrying Mr. Bingley, and despite all the odds, the same for Eliza and Darcy. 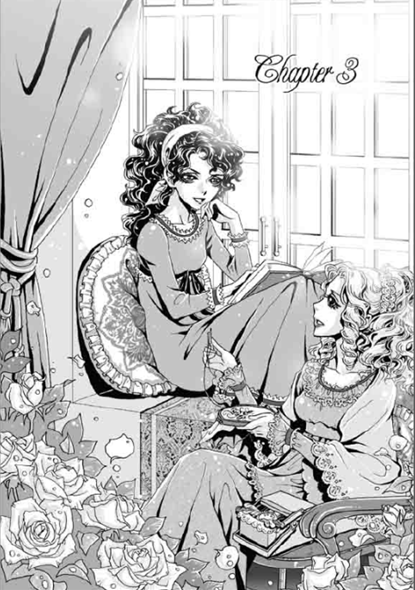 The first thing to talk about is the artwork. It is really pretty (with just a couple of the male characters coming across as a bit creepy), and very much in the style of a shojou (girl’s) manga. This might be the biggest issue for some people, is that this is very much the manga adaptation. There are very stereotypical manga/anime over-reactions, and ways of laying out scenes (such as flowers floating when Darcy asks Lizzie to dance). Also the sticklers for accuracy may not like that some of the clothes, hair, and dialogue are not very regency specific. However, if you just sit back it is a very enjoyable read.

There are some small adjustments to the plot to make it fit in this format. Most of them are excusable, but I really disliked that they made Darcy not a very good dancer. But this was saved a bit by Darcy saving Lizzie from dancing with Mr. Collins (her bumbling cousin that will inherit her father’s money upon his death). There are also bits that are added to the plot that work well, such as Lizzeie being offered money not to marry Darcy, but refusing. There are even homages to other versions, such as when Darcy appears with his wet shirt, very reminiscent of Colin Firth as Darcy. 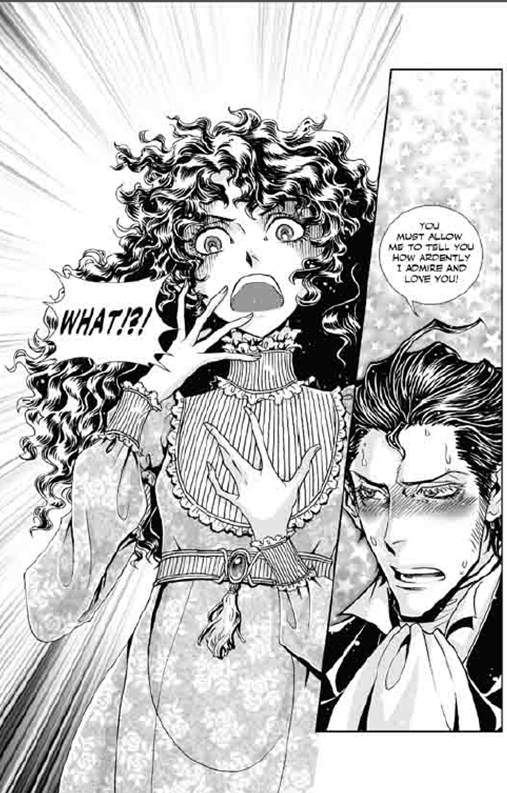 Overall, it is a great introduction to Pride and Prejudice, for anyone that has never been able to sit through the movies or the book. It will also be enjoyable for long time fans of Austen’s works. Just be prepared for the fact that it is unapologetically a manga!