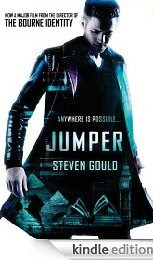 I’d just like to note, before I review Jumper by Steven Gould, that I have read the 2008 version, not the original 1992 version. According to Amazon, this version of the book was rewritten to coincide with the film. Which is strange to me because I did not think the book followed the movie that closely. Elements were in both the book and the movie of course, but the whole plot about terrorists in the book was not in the movie. How strange!

On with the review, Jumper, by Steven Gould, follows the life of Davy. The book starts with Davy jumping (basically teleporting) for the first time as his father abuses him. He finds himself unexplainably in the local library and he decides he isn’t going to return home. He accepts an offer of a lift from a truck driver only to be taken somewhere remote, and the truck driver and two others waiting to try to rape Davy. The scene is graphically written and it upset me a lot and I almost didn’t continue reading. I think it’s important that you are prepared for the level of detail, and it is a very clever way for Davy to jump for the first time. I can’t imagine many situations that would be more stressful for a young boy. Back to the story, so Davy jumps away from the men and ends up back at the library in his local town. Davy heads for New York City next, and ends up getting mugged (he really has a run of back luck!). Davy eventually turns his luck around and meets a woman named Millie, who he begins to date (warning: the sex scenes are described in detail with fairly course language). After managing to track down his mother though, his mother is murdered by terrorists. Davy sets out on a mission to find the terrorists responsible. He ends up in a remote place with an agent who works for the National Security Agency (who wants Davy to work for the Government), the terrorist responsible for his mother’s death, and his father. Will Davy take revenge on all the people who have wronged him?

I enjoyed Jumper, it was a good read. The first half of the book was a bit slow with the main focus being on Davy adapting to his new gift. Davy moves to New York City, only to be mugged and lose his identification as a result, meaning he cannot get work. As a result, he turns to crime in order to get money. Soon, he is living the high life in a fancy apartment, going to fancy restaurants and the theatre. It is at the theatre that he meets Millie, and they begin a relationship. Davy keeps his ability a secret from Millie, but does get a little creepy. For example, he buys an apartment that is two or three doors down from Millie, which he jumps to instead of the airport. When police search his home in New York City, however, he moves into this apartment in Stillwater, living a few doors down from Millie without her knowing. Millie begins to get suspicious of Davy though, especially when she finds out his home in New York City is being searched by police. She breaks up with Davy, who mopes quite a lot. Although, I was enjoying seeing Davy deal with the unpredictability of his new ability to jump, the first half of the book is quite trivial, and nothing much happens.

In the second half of the book, the action picks up. Davy’s mother is murdered by terrorists when she is travelling home. After only recently locating his mother and trying to restore their relationship, this is hard on Davy. Funerals are difficult enough without the National Security Agency showing up and trying to arrest you (because they are suspicious of Davy’s ability). Davy is consumed by hatred for the terrorist who killed his mother and he tries to track him down by jumping from country to country. Each time there is a terrorist attack, Davy jumps onto the plane and jumps the terrorists off the plane, taking them to a remote location in the desert and dropping them into an oasis. This is an interesting and exciting way to capture terrorists. Eventually, Davy finds the man responsible for the murder of his mother. He jumps him to the oasis, where he has also jumped his father and Agent Cox, the man in National Security Agency who has kidnapped Millie in an attempt to force Davy to work for the Government. I felt that the torment that Davy experiences as he tries to decide whether to kill the three men was very realistic. The emotions and urges for revenge that Davy felt were relatable and I also found it difficult to decide whether Davy should exact revenge or whether he should be the better man. I respect Davy for the decision that he made, and I think it shows strength of character.

As I pointed out before, the movie is quite different. There are no terrorists, but Davy is pursued by a man named Roland, played by Samuel L Jackson. Roland doesn’t work for the police, and the reasons behind hunting Davy are much more sinister. Rather than wanting Davy to work for the government, Roland hunts down people with abilities like Davy and kills them. Plus, there is another jumper called Griffin, who doesn’t exist in Jumper. I found this additional character interesting and the fight that occurs between them epic. They jump cars, for example. I think this scene made the movie. I don’t think I preferred the book or the movie, they each had bits that I liked, and bits that I didn’t like.

Final Verdict: There are more books in the series but I’m not planning on reading more about Davy at the moment.