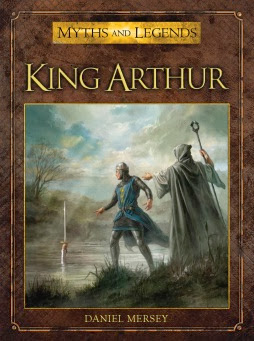 “Nowhere is Arthur’s place in history confirmed and nowhere is it disproved.”
King Arthur by Daniel Mersey

In middle school I stumbled across a book called I am Mordred, by Nancy Springer. It was my first introduction to the world of King Arthur in literature. I grew up with The Sword in the Stone by Disney, but that first taste of the Arthurian literature had me hooked. I have read many tales set in Camelot over the years (although never some of the most famous ones). So when I saw a NetGalley titled King Arthur, I clicked before I even read what the book was.

This book is nice, coffee-table-type book about King Arthur. The author, Daniel Mersey, talks about the history of the stories about King Arthur, the Celtic version of Arthur, and some of the actual history of Arthur.  The author acknowledges that the histories and stories of Arthur would be impossible to condense down completely in this book, so he has focused on just the main points. My favorite part was the last section which had a list of further reading, movies to see, games to play, and places to visit. I will probably be taking advantage of the places to visit at the very least!

For a shorter book, there is a ton of information packed into the story. While I thought I knew a decent amount about the Arthurian tales, there is so much of it that I realized. The progression of the legends was completely new to me, and did help explain some of the discrepancies that exist between versions of Arthur and his knights. As the author mentions, there are really two different Arthurs, “the Dark Ages hero of Wales and the Celtic lands” and the later “chivalrous medieval knight.” The Celtic history was completely new to me, and fascinating, even if I could have used a pronunciation guide for almost all the names. However, as much as I loved all the information, I found it a bit jumbled up and hard to follow. I think maybe a slightly different format would have helped make the information more accessible.

One of the nice features that makes this a good book for the coffee table are the pictures. There was a nice selection of historical plates, painting, and contemporary movie screenshots. I might just buy the book to see them in color and larger.

Another part of the book that I particularly enjoyed was the list of the major characters in Camelot. There are many different ways that everyone is related to one another and their positions in court have varied across the many tales, and I enjoyed seeing my interpretation matched what was listed (mainly that there is both a Morgan and Morgause, rather than just a single character). It was nice to see some of the other female characters besides Guinevere get at least a brief mention, and that Morgan le Fay was “good” in some stories. Also I loved all the references to my favorite character, Mordred. It was fascinating to see that his name was probably originally, Medraut, and in some of the stories he, not Arthur, was the hero! I was a little disappointed with Merlin, as there was not very much discussion on his character, but then again the book wasn’t titled Merlin!

The actual historical evidence of Arthur was one of the most fascinating sections, but also the most difficult for me to follow. I am not particularly versed in very early British history, and my grasp on English geography is not the best, so it was difficult. Also the times and places jumped around so much. However, I enjoyed the different theories. I also found it fascinating that Arthur is an unusual British name and might not actually have been his name. In fact, he might not even have been a king, but just a skilled warrior. My favorite theory is the one that the 2004 King Arthur movie is based on, the idea that the knights of the round table were Sarmatian cavalrymen, and their leader was Lucius Artorius Castus, a Roman General.

Final Verdict: A good coffee table book, with nice pictures, but a bit hard to read straight through.