Written by William Shakespeare
As seen in Stratford-Upon-Avon, England
Summer 2012 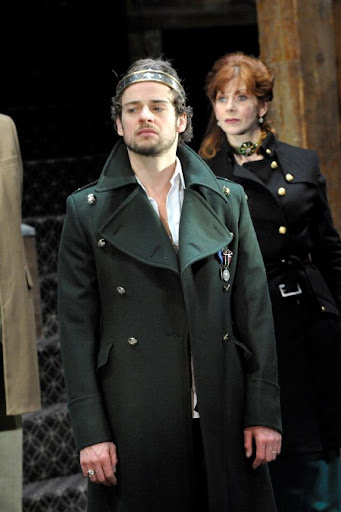 “Be stirring as the time, be fire with fire; Threaten the threat’ner, and outface the brow Of bragging horror.”
King John by William Shakespeare

When I was looking for plays to attend in Stratford-Upon-Avon, I saw the listing for King John and I had to look up whether it was a play by Shakespeare or not, as I had never heard of it before. I found that it was indeed one of the Bard’s and one of his least performed. I had to go then, I needed to see why this was the case, and I did not know if I would ever have a chance to see it again. I booked my tickets and then went and had to search high and low in the library to find one battered copy of the play. I read it before the play, and it was only then that I realized what I had gotten myself into!

I will do my best to summarize the play for you, but this is complicated as it is based on history. The play starts with King John receiving a message from the King of France, Philip, demanding that John abdicate the throne in favour of his nephew, Arthur. John then settles a dispute between two brothers, and discovers the illegitimate son of his brother, the late King Richard I. John’s mother convinces the Bastard to come with them to France and to take on the name Richard Plantagenet (King Richards’s name). When Philip and John meet with their entourages at the city of Angiers, they both demand entrance, but the city holds fast against them, saying only the true King may enter; whoever that may be. When the Bastard suggests that the two Kings join forces to make the city pay, the city counters with the idea that Philip’s son marries John’s niece. The men agree and everyone celebrates, except for Arthur and his mother who have lost out on the throne with the truce. But just as they all start to celebrate, Cardinal Pandolf arrives from Rome and accuses John of disobeying the church, who refuses to recant. Philip is then forced by the church to break the truce with John, and war between the two countries breaks out. In the war, John orders the Bastard to collect money from the English monasteries, and one of his men, Hubert, is ordered to kill young Arthur, but Hubert cannot bring himself to do it. When John’s nobles want Arthur released, and John agrees, Hubert announces that Arthur is dead. John gets angry at Hubert, who reveals that Arthur is actually still alive, which would fix a lot of things. However, while Hubert is away, Arthur dies from a fall, and the nobles leave John. John, having no choice, seeks forgiveness from the church, but the Cardinal cannot stop the French army, and another battle breaks out. The French lose their reinforcements due to a storm, and the nobles return to John when they find out that Philip would have killed them after the battle. However, John is poisoned by an angry monk (because John took money from them) and the nobles then swear allegiance to John’s son, Prince Henry, and the Cardinal arrives with a peace treaty.

The plot is rather involved and it is a bit hard to remember who everyone is on the stage, and who they are related to, even having read the play ahead of time. I think this play would have been much more applicable to people who are more familiar with the history involved in the play. I have the disadvantage of only knowing King John from when he was the villain in Robin Hood stories!

The staging of the play was done in one of the smaller theatres in the Royal Shakespeare Company complex. It was just a carpeted stage with tiered steps at the back. It was a minimalistic play, but that worked. The steps at the back worked to make some of the staging of all the actors very visually appealing, and it worked well in Arthur’s death scene. But sometimes it was hard to tell where exactly a scene was happening, but usually the location was not that important.

There were several rather strange musical interludes in the performance. It started off with a young woman coming onto stage and producing a ukulele from behind her back and a pick from her mouth, and then starting a sing-a-long to a song that I did not know (I think it may be one that is a traditional English one). So I was out of sync with the play from the start. From what I could determine, I was the only person to not know the song. There was also a dance or two for the wedding scene, which re-enacted of Dirty Dancing. When John was suffering from the poison before he died, he also did a song and dance until he started convulsing and died. While none of it was horrible, it just did not fit the play, and I found it a bit jarring.

One of the things that I did like was that they had changed things a little bit to cut out a couple of the smaller characters, and had switched the gender of a couple. The Bastard was actually played by the woman with the ukulele, which is fascinating as the Bastard is one of the most blood thirsty characters. The Bastard was also the one in this version that was ordered to kill Arthur, but could not. This really changed the dynamic of the Bastard, who at the first outbreak of war beheads the man who killed King Richard.

There was one really uncomfortable staging when John gets angry with the Bastard. When he gets angry, he throws her around a little, and then ends up kneeling above her while his hand is up her skirt, appearing to be about to violate her. It was uncomfortable to watch, and I cannot imagine what that scene must have been like for any survivor of sexual assault. But I think the reason I found it so awful was that it was completely unnecessary, it really served no purpose.

Honestly, I am having trouble remembering much about the cast except for the Bastard and John. The rest seemed pretty well cast and acted well. John was interesting as in appearance he really reminded me of Elijah Wood!

When I went a month later to attend The Merry Wives of Windsor, at intermission I overheard some other theatre goers talking about other shows they had seen. When they got to King John, they said exactly what I had been saying, “I can see why it is one of Shakespeare’s least performed plays.” It is not that interesting of a play, and is hard to follow. There are speeches, like in Henry V, but none of them are interesting. There really are no characters that you can sympathize with or like (except maybe Arthur). In the end you are just left wondering what you watched.

Final Verdict: Unless you want to say that you have seen every one of Shakespeare’s plays performed, avoid this one. There are better history plays, more interesting ones. Even with a good cast it is hard to enjoy.